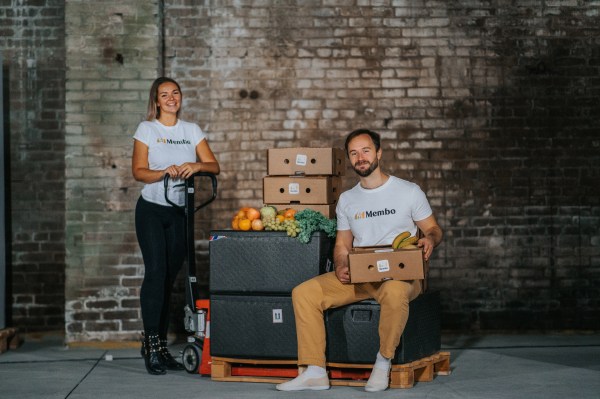 Estonia-based Membo — which is backed by Y Combinator and will be presenting at the incubator’s Summer 2021 Demo Day next week — is aiming to take a slice of the premium end of grocery shopping in Europe and a bite out of supermarket giants’ continued dominance of the traditional weekly food shop.

On-demand food delivery in Europe is of course a highly competitive business with rapid-fire market moves and bursts of consolidation among app makers making a kind of sizzling startup stir-fry. Online grocery delivery, by contrast, tends to be a bit more sedate. Although there is some overlap, with developments like dark stores.

Interest in app-based grocery shopping also had an especially big boost during the pandemic — which has fired up consumer interest in doing the weekly shop online so that’s now driving more startup activity and capacity from supermarket giants trying to meet increased demand for online delivery.

Entering this fray is Membo — which, starting in Estonia, has built an app-based marketplace for local food producers to sell directly to consumers, cutting out other middlemen as the startup handles delivery logistics and billing.

Its service is live in the Estonian cities of Tallin and Tartu, currently. So most of us can merely oggle the mouth-watering fare for now.

Food producers display their wares in Membo’s app, which it likens to a virtual farmers’ market — allowing shoppers to browse and buy from multiple high quality, local fresh food producers and have everything delivered to them in one go. Its business model is based on taking a commission on orders made via its platform.

Products ordered via Membo can be delivered to customers in one of (currently) three slots a week. So within a few days or even next day. The startup batches customer orders to send to producers who only have to send one bulk order back to Membo’s centralized warehouse — where its staff take care of the packing and distribution to fulfil all the individual customer orders.

It launched the service last December and has seen 30% month on month growth over the past eight months — with, to date, 4,000+ orders sent out and customer numbers reaching over 1,400.

While local produce — and therefore the environmental benefits of sourcing food locally (lower ‘food miles’) — is a big feature of what Membo is selling it does also offer food from further afield — shipping Spanish oranges to its Estonia-based shoppers, for example — in order that it can provide customers with a full range of groceries and do things like be able to offer certain seasonal produce at different times of the year.

A full inventory is also important for it to be able to compete with traditional supermarkets on the ‘single weekly shop’ convenience front too, of course.

At present there are 800+ items listed on Membo’s platform from some different 65 producers. (And while groceries are its core offering it says it’s keeping an open mind about how that might expand — noting it recently added a locally produced pet food producer to its inventory, for example.)

But the overarching idea is for the food Membo sells to be as locally sourced to the customer as possible — which obviously has positive knock on impact on freshness and therefore overall grocery quality.

“Everything that we’re doing stems from the insight that people ordering their weekly groceries actually care much more about freshness and quality of their food than they actually care about 15 minute deliveries,” says co-founder and CEO Vahur Hansen, who cut his startup teeth working as an early engineer for TransferWise (now Wise).

“Coming from that insight we set out to build a model that can guarantee that when you order from us, every item in your cart always arrives as the freshest version possible. As an example… when you order trout from us the same trout was caught the day before. You get dairy produce that was specifically prepared for your delivery. You get oranges that were picked from the tree 24 hours ago. That’s the sort of reality that we’re focused on.”

“The product, from a fundamental point of view, is built for Europeans — and sort of for the European mentality,” he also tells TechCrunch. “It’s not new for people [here] to have this sort of mission/feel on being able to consume local produce. Europeans all over, in every country, they know that they need to support their local producers but they also know that local producers really make the best products for them. And for us the bigger goal is to build a cross-European, high quality producer network — coupled with very efficient logistics — so that we can, anywhere, deliver high quality local producers across Europe.”

On the last mile delivery side, the team has tried a few different approaches but is currently outsourcing that to delivery partners — with Hansen reiterating it makes sense for it to stay focused on the core logistics piece.

“When we started with this product we realized that we’re more of a logistics company than an actual store. So everything that we do is logistics in trying to figure out how to organize the quickest producer to end customer delivery.”

So although there can be some overlap in the basic nature of what’s offered for delivery by Membo vs the average on-demand food delivery app there is more than enough clear blue water separating its value proposition vs — for example — the stuff that even a dark store operator like Spain’s Glovo can bike to your door.

It is very hard for hyper speedy delivery focused players to handle fresh produce and get it intact and in date to the customer’s door. Non-perishable, long shelf life products — processed foods, bottled drinks, toiletries etc — or indeed meal deliveries from restaurants which are set up to dish up takeaway are far easier for such platforms to manage and deliver. So grocery freshness is an especially difficult USP for such apps to compete on.

The question then is how large is the market for freshness and quality in the grocery space vs hyper quick, push-button convenience.

Membo’s bet is that delivering quality groceries is ultimately the more sustainable app business to be in. And it looks like a solid one. Certainly in a wealthy region like Northern Europe.

“It’s definitely a different model to dark stores — where they need to have mini warehouses spread across all cities — and also for us, unit economics wise, it’s a very good thing, because you can really save on scale,” says Hansen, discussing how Membo’s model contrasts with on-demand delivery apps doing grocery deliveries out of networks of dark stores.

“The fact that us needing one big warehouse as opposed to like ten smaller ones really effects our unit economics positively.”

“They capture impulse buys — and we capture planned out weekly grocery baskets,” he goes on. “Based on my research, our grocery baskets are at least 50% higher than for the sort of ‘convenience’ grocery apps. Right now it’s around $50 for an average customer. So from a very practical point of view we already see that — people come to our site to really order all of our fresh produce. As opposed to just a few items.”

There is another differentiating factor in play too.

Membo isn’t relying on a retail model that requires predicting customer demand in advance — so its business can be leaner and more efficient. Which also sums to less food being wasted — something else Membo’s target buyers are probably going to appreciate too. (The typical Membo customer is a 27-55 year old suburban mother who likes to cook for their family and prepare weekly meals ahead, per Hansen — someone who “really appreciates high quality, mostly eco ingredients for the food that they make”.)

It’s still early days for Membo of course. But it has big expansion plans in the region.

It’s been using its home market as a “playground” for fine-tuning its model and operations ahead of planned scaling into other European markets — with an eye on potential launches in Switzerland, Germany or France.

Markets with a rich network of local food producers who can be persuaded to sell their wares more directly to consumers via its platform will take priority, per Hansen, who says a range of factors will be involved in deciding where it goes next — so clearly the local competitive mix will also be key.

(Europe-based rivals include the UK’s Farmdrop — which targets a similarly discerning grocery shopper, who cares where their food is coming from and has the money to pay a quality premium, offering farmer sourced produce direct to UK consumers via its own online platform.)

“We’ve been using Estonia as a playground to figure out what is the exact operating model under which we can guarantee freshness for every item. So we’re been fine-tuning our product and building it so that we know it’s a sustainable business before going into expansion,” he says, adding: “That’s also one of the things that YC has really taught us.

“Build a working business and don’t go into scaling mode too quickly. But we are getting to the point where we’re already mapping bigger Western European countries and really honing in — trying to figure out what is the best combination of all of these factors to go in.”

Prior to taking in investment from YC, Membo had raised a little pre-seed funding to get going — although Hansen notes that its team remains small and expenses are therefore pretty lean. Its pre-seed backers included the CEO and VP of growth at Estonian ride-hailing startup Bolt, as well as some of Hansen’s ex colleagues at (Transfer)Wise.