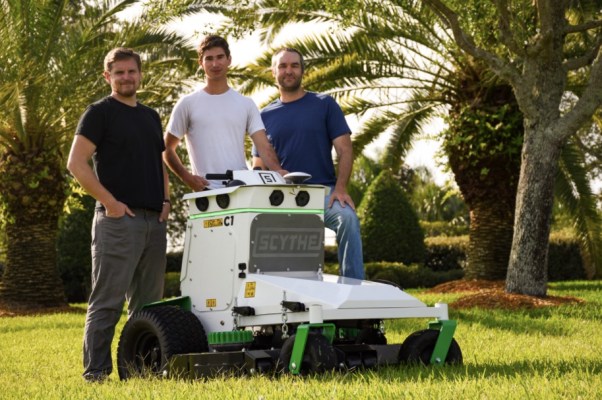 Founded in 2018, Scythe Robotics is emerging from stealth today by announcing an $13.8 million Series A raise. The round was led by Inspired Capital and features True Ventures, Zigg Capital and Lemnos. It brings the Boulder, Colorado-based landscaping robotics company’s total funding up to $18.6 million, including a $4 million seed, also led by True Ventures.

The startup’s first product is an autonomous mower, offered to customers through a Robot-as-a-Service (RaaS) model. The method is becoming increasingly popular in the enterprise and industrial space, essentially offering clients robotics through a rental model that includes regular updates and maintenance. Interestingly, the company’s charging customers based on acres mowed.

The mower features eight HDR cameras and a variety of sensors designed to help avoid people, animals and various obstacles it might encounter on the job. Naturally, all of those sensors also come with a wealth of data collection aimed at — among other things — increasing the robot’s efficiency. Landscaping is a relatively low-hanging fruit for robotics. There’s certainly a lot to be said for automating the process for those with large swaths of land. Toro, notably, recently acquired Left Hand Robotics, and iRobot has announced its own (since delayed) robotic mower.

“To date, commercial landscape contractors haven’t had a technology partner who enables them to keep up with demand and to operate emissions-free. We are that partner,” said co-founder and CEO Jack Morrison in a release. “Our autonomous mower gives them the ability to grow their business, while staying green. It’s designed from the ground up to be an order of magnitude more reliable, more productive, and safer than any existing machine by incorporating state of the art autonomy with a rugged, all-electric design.”

Funding will go toward increasing headcount in its Colorado, Texas and Florida offices, R&D on further products and getting the mower in front of new customers.