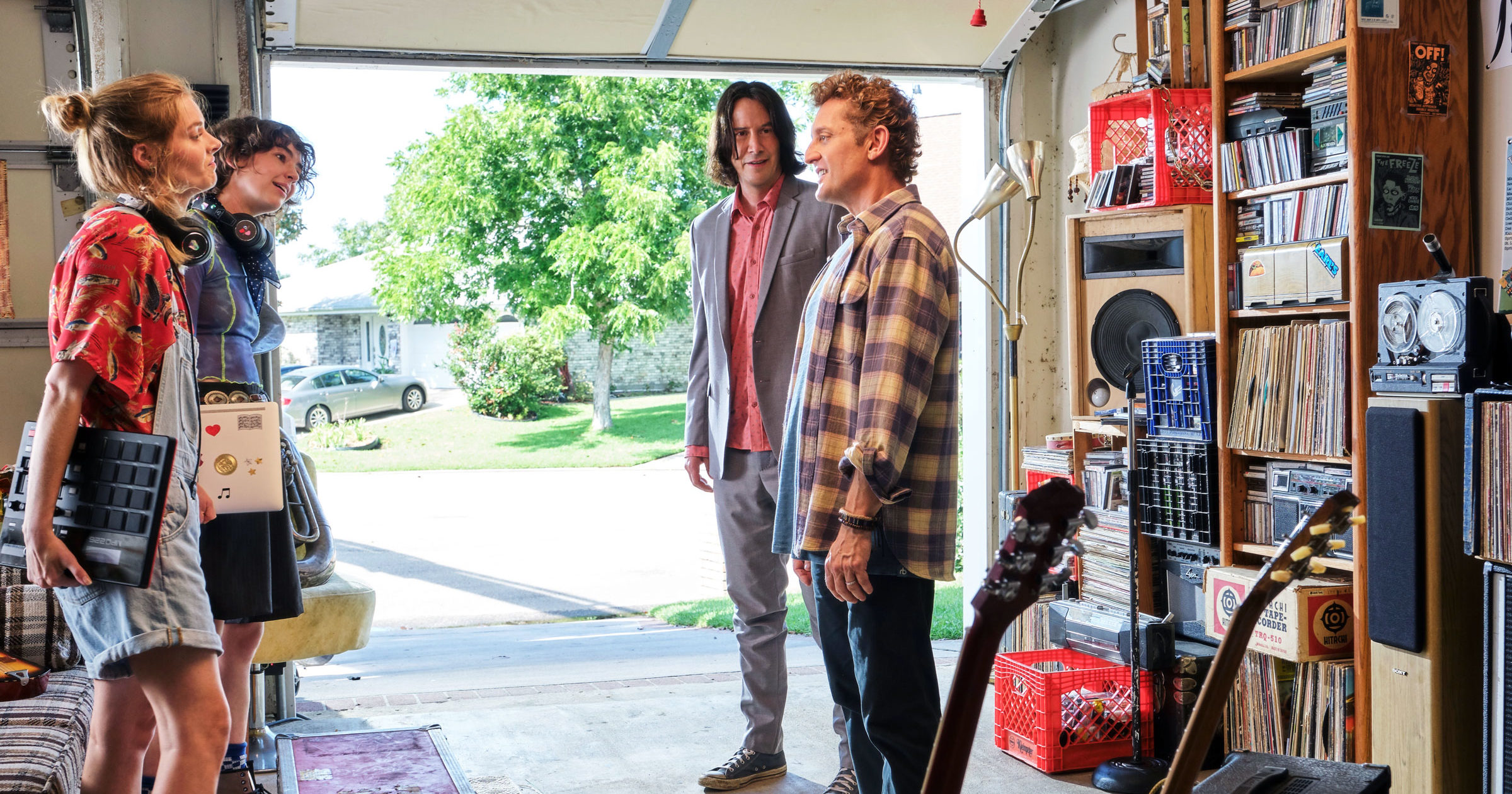 “The concept that the weight of your expectations could actually derail your destiny, I found that very intriguing,” Jordan says in Episode 433 of the Geek’s Guide to the Galaxy podcast.

Humor writer Tom Gerencer was initially skeptical of Bill & Ted Face the Music, but found that it eventually won him over. “The end did really feel good to me, I’ve got to admit,” he says. “I ended up being like, ‘Wow, they actually landed that. I didn’t think they were going anywhere with this, but it really felt good.’”

Geek’s Guide to the Galaxy host David Barr Kirtley wishes the movie had been a bit more inventive, but thinks that it serves as a fitting tribute to the original films. “It seems like everyone involved loves Bill and Ted, and they just made this movie because they want to pay tribute to the characters and reward the fans for their loyalty over the years,” he says. “So I think in terms of those things it basically struck the perfect note.”

Fantasy author Erin Lindsey says that watching Bill & Ted Face the Music is a great way to escape from all the chaos and conflict of the real world. “They couldn’t have known when they started making this movie, obviously, but I feel like this is something that we all need, to watch a movie that fundamentally consists of some sweet, lovely people trying to bring world peace,” she says.

Listen to the complete interview with Rafael Jordan, Tom Gerencer, and Erin Lindsey in Episode 433 of Geek’s Guide to the Galaxy (above). And check out some highlights from the discussion below.

“Bill and Ted are like, ‘We could really use your dad’s keys, but we don’t have time to get them right now. How about after the whole adventure is over, we’ll get in the time machine, and we’ll go back in time and steal the keys and leave them for ourselves?’ And then they’re like, ‘Well, where should we leave them? How about behind this sign?’ And then they’re like, ‘Oh look. Here they are.’ I think that that’s actually brilliant science fiction, and when I watched this in 1989, I thought that was really, really clever. You’re like, ‘The people who wrote this are obviously science fiction fans.’ A non-science fiction fan in 1989 would never have come up with that, I don’t think.”

“There was a student in our high school, when I was a kid, who came in on Halloween dressed as Rambo. He had actual guns, and an actual bandolier of live ammo wrapped around his shoulders and his waist. This was in Waterville, Maine—central Maine. He just came in and hung out, and then one of the teachers was like, ‘Is that actually live ammo?’ And he was like, ‘Yeah.’ And they’re like, ‘Oh no no no. You can’t have that in school. You’re going to have to go put that in your locker.’ … And when I saw that Billy the Kid scene, that’s who I thought of. That, to us today, is like, ‘No no no no no.’ But back then it wasn’t so crazy.”

“I think it’s easily the best of the films, for a lot of reasons. It completes the two-movie arc really well, as a duology. The third movie’s great, but as a duology it finally ends with the battle of the bands, which was necessary and missing from the first movie. These guys are supposed to be legendary musicians, and we need to actually see that. So the climax of part two was the perfect ending of the two movies. It also finally had actual antagonists that created inciting incidents and created a story. You not only had Chuck De Nomolos, a former gym teacher turned time terrorist, but you have evil Bill and Ted, who were just hysterical. I couldn’t get enough of those two.”

“The one thing that just was a record scratch for me was they referred to Louis Armstrong as ‘Loo-ee’ Armstrong, which I don’t think is the preferred pronunciation. It’s interesting to me that if this movie is supposed to be about music and musicians, that nobody involved with the project was like, ‘That’s not actually how you say it.’ It’s ‘Loo-is’ Armstrong. … I don’t know how his stage name almost became ‘Loo-ee’ Armstrong. He’s always known as ‘Loo-ee’ Armstrong, and maybe that’s why they went that route. But certainly from what I’ve seen, all of the footage and songs in which you see him refer to himself, it’s ‘Loo-is,’ and I think it was always known among musicians that his name is ‘Loo-is.’”