Minecraft Earth is live, so get tapping 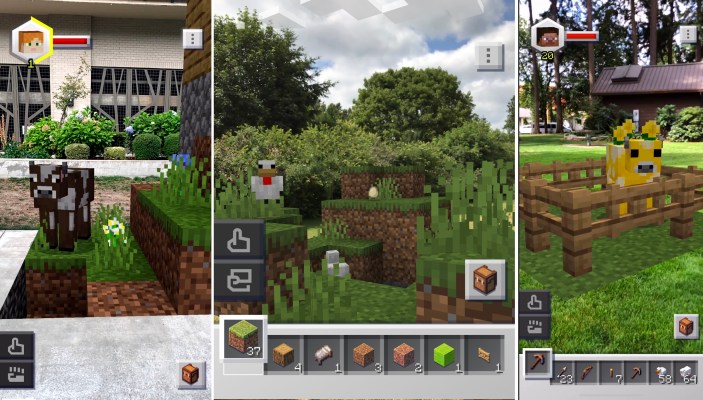 Microsoft’s big experiment in real-world augmented reality gaming, Minecraft Earth, is live now for players in North America, the U.K., and a number of other areas. The pocket-size AR game lets you collect blocks and critters wherever you go, undertake little adventures with friends, and of course build sweet castles.

I played an early version of Minecraft Earth earlier this year, and found it entertaining and the AR aspect surprisingly seamless. The gameplay many were first introduced to in Pokemon GO is adapted here in a more creative and collaborative way.

You still walk around your neighborhood, rendered in this case charmingly like a Minecraft world, and tap little icons that pop up around your character. These may be blocks you can use to build, animals you can collect, or events like combat encounters that you can do alone or with friends for rewards.

Ultimately all this is in service of building stuff, which you do on “build plates” of various sizes. These you place in AR mode on a flat surface, which they lock onto, letting you move around freely to edit and play with them. This sounded like it could be fussy or buggy when I first heard about it, but actually doing it was smooth and easy. It’s easy to “zoom in” to edit a structure by just moving your phone closer, and multiple people can play with the same blocks and plate at the same time.

Once you’ve put together something fun, you can take it to an outdoors location and have it represented at essentially “real” size, so you can walk around the interior of your castle or dungeon. Of course you can’t climb steps, since they’re not real, but the other aspects work as expected: you can manipulate doors and other items, breed cave chickens, and generally enjoy yourself.

The game is definitely more open-ended than the collection-focused Pokemon GO and Harry Potter: Wizards Unite. Whether that proves to be to its benefit or detriment when it comes to appeal and lasting power remains to be seen — but one thing is for sure: People love Minecraft and they’re going to want to at least try this out.

And now they can, if they’re in one of the following countries — with others coming throughout the holiday season.

You can download Minecraft Earth for iOS here and for Android here.