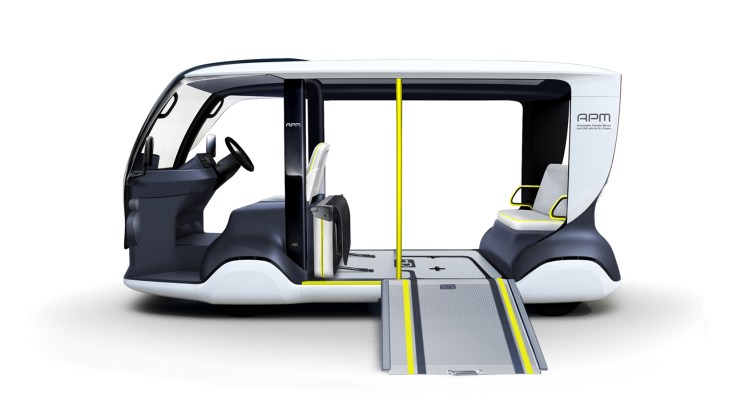 When thousands of people converge on Tokyo for the 2020 Olympic and Paralympic Games, the city’s infrastructure will be tested. Toyota is getting into the mix to handle some of the ways people will get around the city and the Olympics venue.

Toyota unveiled Thursday a new product called APM, or Accessible People Mover, which is designed for the Olympics and Paralympic Games.

The aim, according to Toyota, is for this vehicle to provide “mobility for all” and to solve the so-called “last mile” problem. In Toyota’s view, that means a vehicle that can transport as many people as possible, including elderly, pregnant women, families with young children and people with disabilities.

Toyota will deploy 200 of these vehicles, which will operate in and around the event. There will be two models — basic and relief — in the fleet. The basic version is a low-speed short-distance battery electric vehicle that will be used to transport visitors and staff within the Olympic grounds. Each vehicle will hold six people, including the driver. When used for passengers in wheelchairs, the configuration can be modified by folding the seats to allow the wheelchair rider in the second row.

The “relief” model will be used for emergencies. The rows can be moved to provide space for a stretcher and two relief stretchers.

These APM vehicles are just a taste of what Toyota plans to deliver during the 2020 Olympics. The automaker has shown off eight other vehicles, as well as assistive robotics, all under the mobility for all moniker, including the e-Palette vehicle, which is basically a flexible blank slate on wheels with an electric motor and a fully modular interior design.

Other vehicles include the JPN Taxi, which was introduced in 2017 and can accommodate people using wheelchairs, and the Toyota i-ROAD, a standing-riding device designed for support staff at the Games, such as security officers.

Toyota plans to demonstrate automated vehicles that will be able to handle all driving functions in certain well-defined areas in the Tokyo Water Front City and Haneda areas in Tokyo. It also will demonstrate the TOYOTA Concept-i, a car that recognizes drivers’ emotions and preferences and can make conversation using artificial intelligence.