I’m sitting in the passenger seat of a Nissan Qashqai, PS4 controller in hand, while we follow an expensive sports car nervously creeping round small plastic cones on the UK’s legendary Silverstone motor racing circuit.

It’s far from the most exhilarating motor sports action the circuit has witnessed, but my sweaty palms and facial expressions tell a different story.

That’s because, with every squeeze of the R2 trigger, the exhaust of the modified Nissan GT-R roared and the car sped away from us down the track.

There’s a moment of panic as the car starts to get away from me, and a scrambled press of L2 brings it to a stop. That was scary, but also awesome. 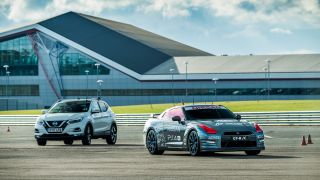 This isn’t a retelling of a fever dream after a heavy night on the cheese. No, this is real life.

The brainchild of Dr James Brighton, who heads the Centre of Automotive Technology at Cranfield University in Bedfordshire, UK, this fully remote-controlled Nissan GT-R took between four and six weeks to convert from its traditional form, and is driven using a PlayStation Dualshock 4 controller. It’s a little bit bonkers, but also a whole lot of fun.

The remote is wired into a computer (via its microUSB port) that transmits to the car, but the Dualshock 4 itself hasn’t been modified in any way – it’s the same one you get in any box with a new PS4.

However, the computer (and antenna) this one is plugged into gives you an operating distance of up to 1km away from the car, a far cry from the relatively limited Bluetooth range of the standard PlayStation controller.

R2 is set up to control the gas, L2 the brake, up on the D pad selects forward gear, down is reverse and steering is via the left analogue stick. The light bar even changes color to show you which mode you’re in (neutral, forward, reverse).

For anyone who’s played any racing game, it’s a natural setup – until you look up and see the real-life car ahead of your leap forward.

It’s a very strange sensation to start with, requiring tentative squeezes of R2 and L2 as I worked out the pressure required to get the car going without ploughing it into the tyre wall.

Steering felt twitchy as I carefully nudged the GT-R round a few cones, while the brake control was pretty much all or nothing, which brought the car to some alarming stops.

A couple of laps of the small oval track laid out for me though, and things started to fall into the place. 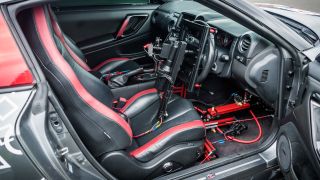 There’s no space for a human driver, but the passenger seat is free if you’re feeling brave

As the confidence flowed I became more aggressive on the throttle down the straights, braking later and turning more smoothly.

The controls become intuitive surprisingly quickly, especially if you’ve spent many, many hours with a PlayStation controller in your hand.

The biggest struggle for me was the view. Following in a car behind it was sometimes difficult to gauge just where the GT-R was on the track, but unlike some of my companions I managed to avoid eating any cones.

By the end of my session I was reverse bay-parking the GT-R into a designated area. I didn’t want to stop.

A final sprint to the start/stop line, and an egotistical flick of the yellow marker cone with the front-right wing of the car signaled the end of my time behind the controller. 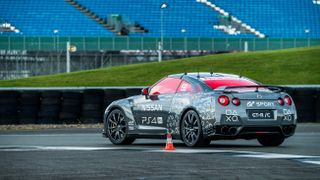 It’s not the end of the road for the GT-R R/C though, and while Sony and Nissan have no firm plans on what they’ll do next with the car, other than take it to a series of events to show it off to the general public, it could become an interesting learning aid.

Dr Brighton, who’s built more than 70 full-size remote-control vehicles including cars, boats, buses and trucks. says he’d like to tour it around schools as a way of encouraging youngsters to get into STEM subjects (science, technology, engineering and mathematics) – and had this rolled up to my school when I was 15 it would have definitely peaked my interest in engineering and robotics.

Instead, here I am, a simple word monkey tapping away on his mechanical keyboard with just enough skill to maybe fix the broken spotlight in the kitchen, but little else.

On the flip side though, turns out I’m pretty darn good at driving full-size remote control cars. Is that a viable job? No? Okay, I’ll stick to the words then. 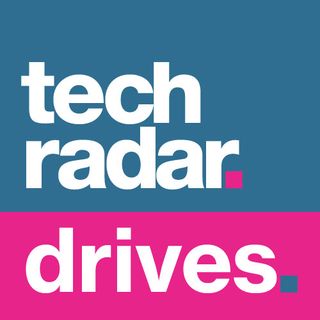