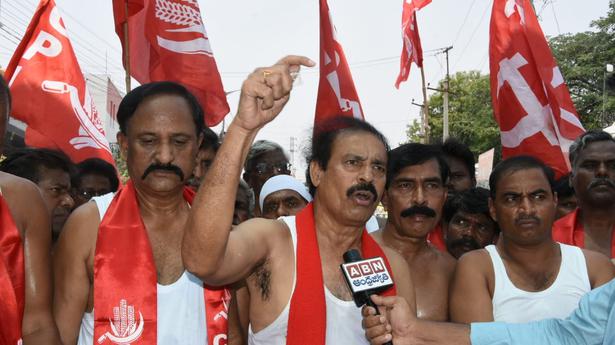 Communist Party of India State secretary K. Ramakrishna along with other party leaders — State committee member D. Jagadeesh and Anantapur district secretary Jaffer — staged a half-naked protest march against what he termed the authoritarian rule of Chief Minister Y.S. Jagan Mohan Reddy, here on Monday. The leaders walked one kilometer without shirts on the main streets of the city.

The CPI leaders, who were arrested on Sunday evening while trying to go to Vijayawada by train, were shifted to two police stations and released late in the night. The party leaders slept at the foot of Dr. B.R. Ambedkar’s statue as a protest against the alleged stifling of democracy by the present regime, by not allowing democratic protests against the government policies.

Mr. Ramakrishna said that the Centre was increasing the price of the petroleum products enormously and the State government was continuing to charge local taxes at a very high rate leading to burdening of the poor. He demanded immediate roll back of the prices and also warned Mr. Jagan of severe consequences of his government not allowing protesters into Vijayawada or close to the secretariat.

“When such protests are a democratic right of the citizens, these dharnas take place in Dharna Chowk and in Delhi, but the YSRCP government does not allow any such protests, showing its authoritarian attitude,” he alleged.