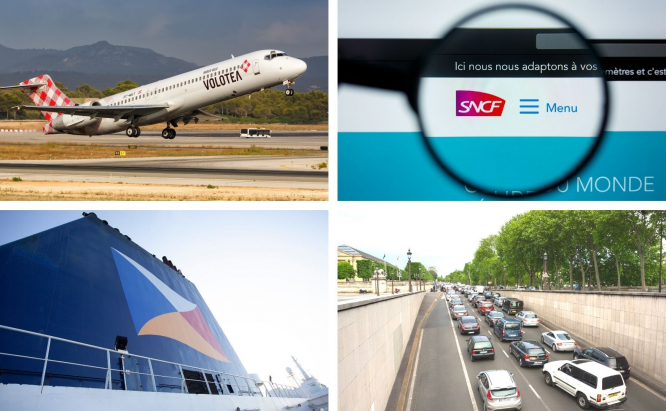 We look at the stories affecting travel to, from and around France this week.

Traffic is expected to be heavy on major French roads this weekend, as holidaymakers depart for and return from Easter breaks.

Schools in Zone B, which includes Nantes, Nice, Rennes, Aix-Marseille and Strasbourg, are just finishing their Easter holidays, while Zone C – Paris, Montpellier and Toulouse – are just beginning theirs.

Therefore, motorway network maintenance service Vinci Autoroutes has warned that there will be “heavy traffic in both directions on major roads, especially in the Rhône Valley.

The A9 between Nîmes and Montpellier will also be busy between now and tomorrow lunchtime.

Conditions will be difficult on the A8 in both directions until this evening, with the peak of traffic occurring between 17:00 and 20:00.

Vinci Autoroutes added that: “The traffic will be particularly dense [today, Friday, April 22] on the A10 near Saint-Arnoult and to a lesser extent at Orléans and also Tours.”

Tomorrow will also be busy until around 15:00, and on Sunday traffic jams are expected in Paris, according to Vinci.

National traffic forecasting service Bison Futé also predicts that conditions will be “difficult” coming out of Paris today and Sunday.

It recommends that drivers get out of Ile-de-France before 14:00 today, and before 09:00 or after 16:00 tomorrow, adding: “On this fourth weekend in April, all schools are on holiday.

“While some are returning, other [families] are leaving their homes for a few days of holiday.

“Therefore, families will be using almost all of France’s major roads to go on trips. However, during the spring holidays, holidaymakers take their time to go away and do not come back at the last minute. This dispersal in terms of time and space can help to limit road congestion.”

You can find live traffic updates on the Bison Futé website.

P&O Ferries services remain cancelled today (April 22) on the Dover to Calais route, with passengers being told that they can travel with DFDS instead.

“Alternatively, if you do not wish to travel, please email [email protected] and we will process a refund for you.”

#PODover #POCalais: Our services remain suspended today, however we have secured space with DFDS. Please call us on 01304 44 88 88 and we will rebook you. Alternatively, if you do not wish to travel, please email [email protected] and we will process a refund for you.

Dover-Calais services have been suspended since the company sacked 800 of its UK crew members on March 17, and P&O have said that crossings will not resume until at least April 28 inclusive.

Any hopes that the company may have had to begin sailing again were dashed when the UK Maritime and Coastguard Agency (MCA) detained both the Spirit of Britain and Pride of Kent ships when they failed safety inspections last week. The MCA stated that the Pride of Kent inspection uncovered: “a number of deficiencies including in safety systems and crew documentation.”

Although P&O Ferries are not currently running, the Port of Dover has said that traffic is currently “free flowing within the Port.”

DFDS has told passengers travelling through Dover today to allow 90 minutes to complete border controls and the check-in process.

After a weekend of action over Easter, Volotea employees will be renewing their strike action this Saturday and Sunday (April 23 and 24), causing some changes to scheduled flights.

Affected passengers should be contacted by email or text to explain the situation and their options.

Employees are striking over pay and working conditions, with Christophe Hannot of the Syndicat national des pilotes de ligne telling BFMTV: “Conditions have not stopped getting worse over the last two years.”

He added that Volotea staff had taken a 20-25% pay cut during the Covid crisis, when “everyone thought it was vital that employees adapted to the situation.” This measure was reversed at the beginning of the year, but in March company bosses sought to reduce wages once again.

SNPL has said that the airline “continues to demand huge efforts from employees to survive the consequences of the pandemic, while refusing any sort of dialogue.”

Last weekend, the strikes saw passengers delayed for up to 24 hours, or rerouted to different airports.

This weekend, Volotea has said that it will put “everything in place to limit as much as possible the impact of the strike movement on its operations.”

If your flight is severely delayed or cancelled, remember that you may be entitled to compensation.

4. SNCF Connect to be revamped with new features in coming weeks

SNCF’s new Connect booking and itinerary app, which was launched in January, will soon feature a series of new functionalities, as the company responds to complaints from users over the platform’s accessibility.

SNCF has already announced the resolution of several bugs reported by customers, and will in May be introducing new features to make the app more useful.

These will include the option to pay for journeys using valid e-vouchers, the possibility of viewing a monthly calendar of prices and filters enabling customers to see only direct journeys or low-price tickets.

“For our users, there were three distinct areas [of complaint]: missing functionalities, difficulties with operating the tool and questions on the way in which information was presented,” said Anne Pruvot, director general of SNCF Connect & Tech.

These new features will aim to address the first of these concerns.

Since SNCF Connect was launched on January 25, 36 million tickets have been bought through the app.

5. Ryanair cancels over 280 flights this weekend, some to French cities

Ryanair has cancelled over 280 flights departing from Charleroi and Brussels in Belgium, following a call for strike action from the PNC union.

PNC is calling for further negotiations on a new collective staff convention, as well as for higher salaries and bonuses. The union reports that 75% of its Ryanair members earn the minimum wage paid within the aviation sector, “a derisory gross sum of €2,000.”

Around 50% of Ryanair flights will still be running from the two Belgian airports, but if your flight has been cancelled you should be contacted by email and informed as to the options available to you, whether that be a ticket exchange or a refund.

Ryanair’s people director Darrell Hughes said in a statement: “It is incredibly frustrating that the [unions] have continually rejected offers of mediation and seem to want to cause unjustified disruption to thousands of customers this weekend.”

6. Paris-Normandy trains to take around 30 minutes longer this summer

Train journeys between Paris and Normandy will take 30 minutes longer on average this summer because of modernisation work on the RER line between the capital and Mantes-la-Jolie.

A train between Caen and Paris leaving at 08:59, for example, will take three hours and three minutes as opposed to two hours and five minutes. The 16:57 service will, on the other hand, only take 40 minutes longer, at two hours and 43 minutes.

The change will take effect on July 11 and last until August 15, France Bleu reports.

The group’s frustration was matched by the l’Union des usagers du Paris-Cherbourg, which Tweeted: “Communication between the Normandy region and the SNCF Nomad Train is becoming more and more disastrous! Contempt for passengers is becoming stronger and stronger, consultation no longer exists.”

South Korean airline Asiana has announced the resumption of its Paris-Seoul route, which was suspended during the Covid crisis.

Flights will begin on June 22 and run on Wednesdays, Fridays and Sundays from Charles de Gaulle.

Asiana will be competing with Air France and Korean air on this route.

12 questions and answers about private speed radar cars in France