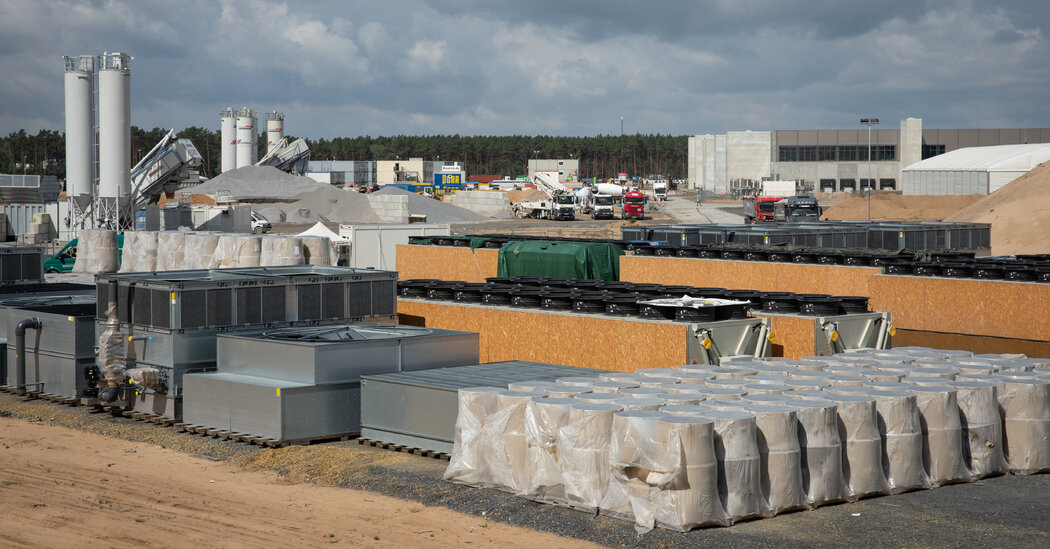 German authorities cleared the plant, which was built near Berlin, to open for production. Tesla plans to build 500,000 electric cars a year there.

The announcement was critical for Tesla, which had raced to begin construction of the $7 billion plant two years ago without waiting for the German bureaucracy, a move that risked having to tear down the plant had the approval not been secured.

There was no immediate comment from Tesla after the announcement. Dietmar Woidke, the governor of Brandenberg, the German state near Berlin where the plant is, said the company had set itself a deadline of two weeks to complete the final steps before beginning production.

Tesla posted record-breaking sales in 2021, a year when it became the industry’s first trillion-dollar automaker. The new plant is expected to expand the company’s earnings in Europe, where its cars are already top sellers among electric vehicles. The arrival of the U.S. giant has put Germany’s traditional automakers on notice that they must raise their game or lose out to a company seen as much as a tech giant as a competitor.

The factory will be Tesla’s third assembly plant, alongside ones in Fremont, Calif., and Shanghai. Another is expected to open soon outside Austin, Texas.

A Critical Year for Electric Vehicles

The popularity of battery-powered cars is soaring worldwide, even as the overall auto market stagnates.

Tesla has said it plans to produce 500,000 vehicles at the new facility, known as Gigafactory Berlin-Brandenburg. It took just more than two years for construction to be completed to an extent to begin production — record time for a major factory in Germany, but slower than the company’s chief executive, Elon Musk, had hoped.

“This was a mammoth undertaking,” Mr. Woidke said, announcing that the 537-page administrative notice had been handed to representatives of Tesla on Friday.

No one spoke on behalf of Tesla at a news conference announcing the approval, but Mr. Woidke said that representatives of the company wore T-shirts emblazoned with, “March the Fourth Be With You,” a play on the slogan from Star Wars. (The Germans wore suits and ties.)

The announcement came as a judge in Frankfurt was considering a lawsuit challenging the plant’s opening over water issues. Hours after the approval was announced, the judge ruled that authorities had not been thorough enough in their assessment of the planned water use, a victor for local environmentalists, but not one that is expected to derail the plant’s ability to open.

Christiane Schröder, the regional head of the Nature Protection Federation of Brandenburg, known as NABU, one of the groups that had brought the lawsuit, said they hoped the victory would send a message to authorities about the need to protect groundwater in the region.

Even if it will not prevent the opening of the plant from going ahead, she said, “It sets a precedent.”

Mr. Musk had announced he would build the plant — on a site where, during the days of the communist East Germany, soldiers trained to push back NATO — at an awards ceremony in Berlin in November 2019. Local authorities, eager to court the Silicon Valley entrepreneur, rushed through building permits in a matter of weeks, instead of the usual timeline that runs in months.

But the production began to bog down after Tesla announced last April that it wanted to add a battery production facility to the site, a step that required extra paperwork. Officials for Brandenburg said they received the final documents from Tesla before the end of last year.

The plant is already assembling prototypes — authorities granted the company permission on Jan. 10 to produce 2,000 prototypes, after Tesla said its initial run of 250 test vehicles had been insufficient to bring the plant into full working order. Tesla is not allowed to sell the vehicles and it is not yet clear when the first Model Ys for sale will roll off the factory floor.

The company has said the plant will eventually employ more than 12,000 people, and the company is still seeking to fill hundreds of jobs for engineers, operators and managers and others. Mr. Musk has indicated that one attraction of Germany was its auto-making tradition and deep pool of engineering expertise, which he already capitalized on by acquiring a German company specialized in automation and chip production in 2017.

Overall, the U.S. automaker sold 34,389 vehicles in Germany in 2021, up from 9,357 in 2019. Until now, the Model Y has been imported from Shanghai. Model 3 Teslas, which last year topped the list of the most popular electric cars in Germany and all of Europe, according to Jato Dynamics, a market research firm, are imported from the United States.

The new Tesla plant is about 100 miles east of Wolfsburg, home to the company’s biggest German rival in the market for electric vehicles, Volkswagen. Long dominant on the domestic market for cars with combustion engines, the traditional automaker is already scrambling to catch up with its new rival, with plans to build their own new plant dedicated too building electric vehicles.