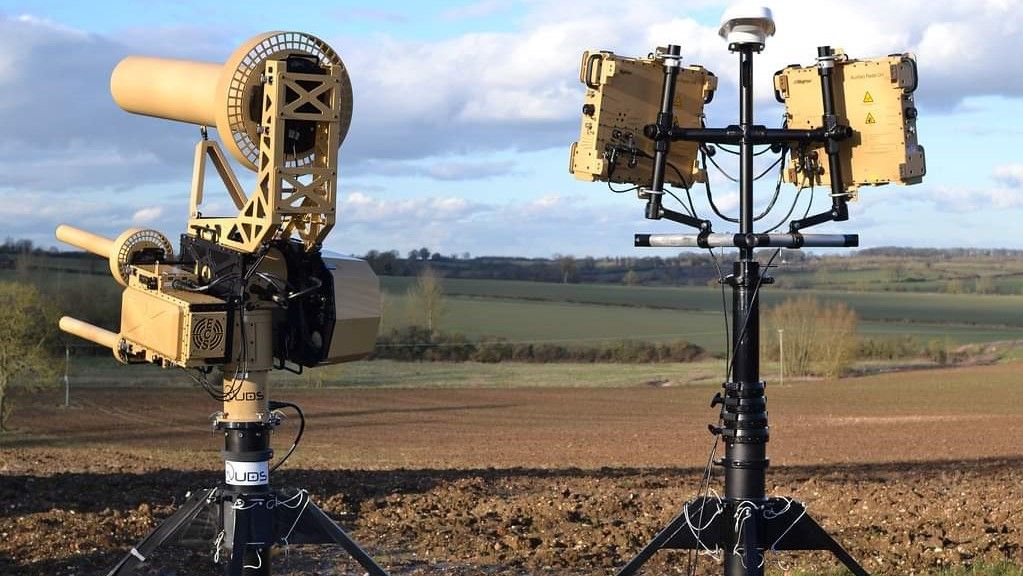 In the wee hours of June 27, one of India’s most critical military installations, the high-security Air Force Station in Jammu, became victim of a ‘novel’ weaponised drone attack. The attack was first of its kind and is being seen as a precursor of things to come.  The June 27 twin drone attack was masterminded and executed by terrorists in the Shakargarh sector targeting Air traffic control, radar and parked helicopters.

No longer seen as mere nuisance, weaponised drones have the ability to drop bombs, fire missiles and crash armed UAVs into the target.

The Unmanned Aerial Systems’ (UAS) market in the country is pegged at $866 million, and globally it’s estimated to be $21.47 billion. With double-quick alterations now possible on the drone structure, besides reinforced payload technology and shrinking of various elements, the threat level is huge and the task is challenging. The sheer number of the UAS, their different sizes, flight characteristics, capabilities, performance parameters, mission and vulnerabilities, make it difficult for India to overcome this challenge.

Ever since the Coronavirus outbreak at the end of 2019, the Indian forces have recorded close to a hundred sightings on India’s western borders – from Jammu and Kashmir to Gujarat. To make matters worse, these drones have been sighted in the eastern region which is impacted by the Maoist extremism.

The attack has shifted the focus to the glaring gaps in India’s border security. Defence Research and Development Organisation (DRDO) is working on developing anti-drone ‘Swadeshi’ technology to secure the border areas and foil any terrorist attempts.

While the national security council secretariat (NSC), which advises the PMO on national security and strategic interests, has been conscious of the threat posed by terror drones to Indian security for quite a few years, the process to acquire technologies to counter the threat is quite tedious and cumbersome. Till date, only a request for information (RFI) has been floated for acquisition of anti-drone technologies.

India only has a limited number of anti-drone technology makers, which include DRDO, Bharat Electronics Limited as government undertakings, among others, with Zen Technologies and ACSG Corp active as private entities.

A large-scale, inclusive public-private-partnership (PPP), according to several experts, should be the way forward.

In early July, immediately after the attack on the base in Jammu, the BSF, in collaboration with the Ministry of Electronics and Information Technology (MeitY), launched BSF Hi-tech Undertaking for Maximising Innovation (BHUMI) to find suitable systems to detect and destroy drones and tunnels with the help from Indian companies. At the moment, BSF is exploring a pool of 500 private Indian companies to find solutions. The initiative is part of the Atmanirbhar Bharat mission.

Anti-Drone System from Zen Technologies works on drone detection, Classification and tracking on passive surveillance, camera sensors and neutralization of the threat through jamming the Drone communication. ACSG Corp., a critical infrastructure protection company, is also building relevant technology. Its high-powered jammers, the company has claimed, can tackle multilayered threatsat once.

Major Vijay, the spokesperson of ACSG Corp pointed out that “a 360-degree advanced radar system can track intruding drones from a 2-km range, thereby reducing and eradicating the perceived threat even before it makes an impact.”

These companies are also expected to help in finding communication solutions at places where there is no network, besides detecting unauthorised communications in dead zones.

The existing counter-drone technology is restricted, and largely sourced and licensed from developed countries. This is primarily because there is very little trust in Indian technology.

Historically, India has been meeting its requirements from Israel and the US. But this trend is changing, as it should, with the Government putting emphasis on technology developed by domestic players. There’s enough and more potential at home and the Government is beginning to lay emphasis on the same.

Case in point? The IAF recently placed an order worth Rs 155 crore for anti-drone platforms or Counter Unarmed Aircraft System (CUAS). The contract was given to the Hyderabad-based Zen Technologies.

Keeping with the ‘make in India’ philosophy, the Indian armed forces have already approved contracts to Indian companies for making anti-drone systems that is worth over Rs 300 crores.

Can India become a counter-drone technology export hub? The answer is simple. Yes, however, only if more private companies are brought onboard to tackle the issue.