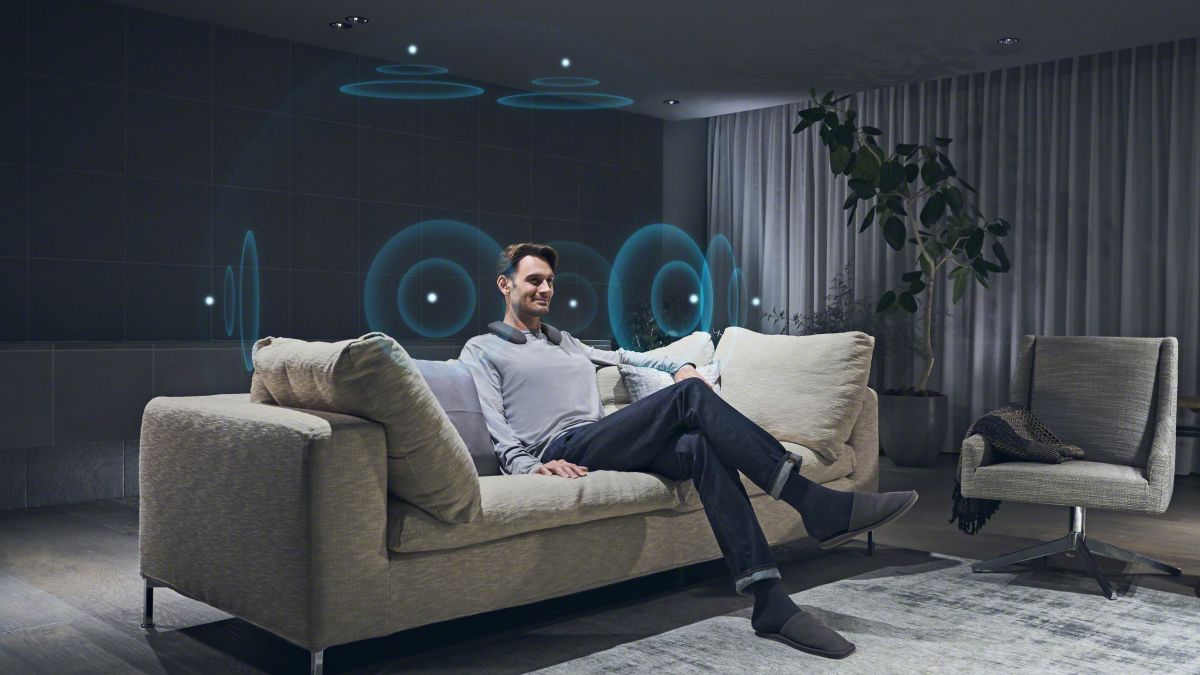 Sony is putting Dolby Atmos spatial audio in a new place – around your neck. It’s all thanks to the new Sony SRS-NS7 wireless neckband speaker that can stream Dolby Atmos tracks from a connected Bravia XR TV when you pair it with a wireless transmitter.

That sounds like a lot of work to get Dolby Atmos sound – but it’s a nice alternative to filling your living room with floor-standing speakers for folks who are short on space.

In addition to Dolby Atmos sound from the TV, the SRS-NS7 can stream Sony 360 Reality Audio tracks from Deezer and Tidal from a smartphone. To tune the sound for your ears, Sony is releasing a 360 Spatial Sound Personalizer app that you can use to take a photo of your ears to make the sound more immersive.

According to Sony, the wearable speaker has a 12-hour battery life at a regular volume level and around five hours when you crank it up to the max level. It’s IPX4 water-resistant – which is nice but probably not insulated enough to wear out in public. (Please, please don’t wear this in public.)

The Sony SRS-NS7 wireless neckband speaker will be available to purchase soon for $299 (around £220, AU$400) while the accompanying WLA-NS7 wireless transmitter that connects the speaker to a Bravia TV can be picked up soon for $59 (around £44, AU$80).

Neckband speakers have long existed as an alternative to traditional over-ear headphones. The latter are unmatched when it comes to critical listening, but the former are certainly more comfortable to wear for long periods of time.

The tradeoff that neckband speakers have always made is that they’re usually lacking in the technology department – because, after all, they’re limited by Bluetooth’s small bandwidth – and that meant that they never really sounded as good as other types of speakers.

Sony is trying to change that with the SRS-NS7 – but it will require the help of that wireless transmitter if you want to stream Dolby Atmos tracks. That’s an unfortunate caveat given that the wireless transmitter is sold separately and is only currently compatible with Bravia TVs, but it seems like it’s an elegant solution for an age-old problem.