When people talk about “online food delivery” services, chances are that they’ll think of the Uber Eats, Instacarts and Getirs of this world. But today a startup that’s tackling a different aspect of the market — addressing the supply chain that subsequently turns the wheels of the bigger food distribution machine — is announcing a big round of funding as it continues to grow.

GrubMarket, which provides software and services that help link up and manage relationships between food suppliers and their customers — which can include wholesalers and other distributors, markets and supermarkets, delivery startups, restaurants, and consumers — has picked up $120 million in a Series E round of funding. 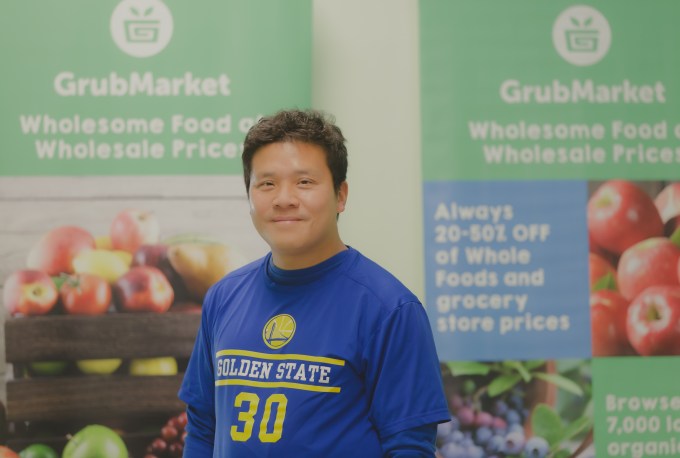 Mike Xu, GrubMarket’s founder and CEO (pictured, above), tells me that the company is currently profitable in a big way. It’s now at a $1 billion annualized run-rate, having grown revenues 300% over last year, with some markets like New York growing even more (it went from less than $10 million ARR to $100 million+).

With operations currently in Arizona, California, Connecticut, Georgia, Michigan, New York, New Jersey, Missouri, Massachusetts, Oregon, Pennsylvania, Texas, and Washington, and some 40 warehouses nationwide. GrubMarket had a pre-money valuation of over $1 billion, and now it will be looking to grow even more, both in terms of territory and in terms of tech, moving ahead in a market that is largely absent from competitors.

“We are still the first mover in this space,” Xu said when I asked him in an interview about rivals. “No one else is doing consolidation on the supply chain side as we are. We are trying to consolidate the American food supply chain through software technologies, while also trying to find the best solutions in this space.”

(And for some context, the $1 billion+ valuation is more than double GrubMarket’s valuation in October 2020, when it raised $60 million at a $500 million post-money valuation.)

Longer term, the plan will be to look at an IPO provisionally filing the paperwork by summer 2022, Xu added.

GrubMarket got its start several years ago as one of many companies looking to provide a more efficient farm-to-table service. Tapping into a growing consumer interest in higher quality, and more traceable food, it saw an opportunity to build a platform to link up producers to the consumers, restaurants and grocery stores that were buying their products. (Grocery stores, incidentally, might be independent operations, or something much bigger: one of GrubMarket’s biggest customers is Whole Foods, which uses GrubMarket for produce supply in certain regions of the U.S. It is currently is the company’s biggest customer.)

As we wrote last year, GrubMarket — like many other grocery delivery services — found that the pandemic initially provided a big fillip, and a big rush of demand, from that consumer side of the business, as more people turned to internet-based ordering and delivery services to offset the fact that many stores were closed, or they simply wanted to curtail the amount of shopping they were doing in-person to slow the spread of Covid-19.

But fast forward to today, while the startup still serves consumers, this is currently not the primary part of its business. Instead, it’s B2B2C, serving companies that in turn serve consumers. Xu says that overall, demand from consumers has dropped off considerably compared to a year ago.

“We think that restaurant re-openings have meant more people are dining out again and spending less time at home,” Xu said, ” and also they can go back to physical grocery stores, so they are not as interested as they were before in buying raw ingredients online. I don’t want to offend other food tech companies, but I think many of them will be seeing the same. I think B2C is really going to slow down going forward.”

The opening for GrubMarket has been not just positioning itself as a middleman between producers and buyers, but to do so by way of technology and consolidating what has been a very regionalized and fragmented market up to now.

GrubMarket has snapped up no less than 40 companies in the last three years. While some of these have been to help it expand geographically (it made 10 acquisitions in the Los Angeles area alone), many have also been made to double down on technology.

These have included the likes of Farmigo, once a Disrupt Battlefield contender that pivoted into becoming a software provider to CSAs (an area that GrubMarket sees a lot of opportunity), as well as software to help farms manage their business staffing, insurance and more: Pacific Farm Management is an example of the latter.

GrubMarket’s own in-house software, WholesaleWare, a cloud-based service for farmers and other food producers, saw its sales grow 3,500% over the last year, and it is now managing more than $4 billion in wholesale and retail activity across the U.S. and Canada.

There will be obvious ways to extend what GrubHub does deeper into the needs of its customers on the purchasing end, but this is in many ways also a very crowded market. (And not just crowded, but crowded with big companies. Just today, Toast, the company that builds software for restaurants, filed for a $717 million IPO at potentially a $16.5 billion valuation.) So instead, GrubHub will continue to focus on what has been a more overlooked aspect, that of the suppliers.

“I am focused on the food supply chain,” Xu said. “Operators in the food supply chain business most of the time don’t have any access to software and e-commerce technology. But we are not just a lightweight online ordering system. We do a lot of heavyweight lifting around inventory management, pricing and customer relations, and even HR management for wholesales and distributors.” That will also mean, longer term, that GrubMarket will likely also start to explore connected hardware to help those customers, too: robotics for picking and moving items are on that agenda, Xu said.

“GrubMarket has built a profitable, high-growth business underpinned by its best-in-class technology platform that’s reinventing how businesses access healthy, fresh foods,” said Jack Litowitz, director of strategic investments at Reimagined Ventures, in a statement. “We’re proud to support GrubMarket as it continues to expand into new regions and grow its WholesaleWare 2.0 software platform. At Reimagined Ventures, we always seek to invest in businesses that are disrupting inefficient industries in innovative ways. Mike Xu and the GrubMarket team have built one of these businesses. We’re excited to back their vision and work in making the food supply chain more efficient.”

“GrubMarket is transforming the trillion-dollar food distribution industry with unprecedented speed by implementing advanced digital solutions and operational discipline. The company’s scale, growth, and profitability are extraordinarily impressive. Pegasus is delighted and honored to be part of GrubMarket’s exciting journey ahead,” added Bill Reichert, partner at Pegasus Tech Ventures.