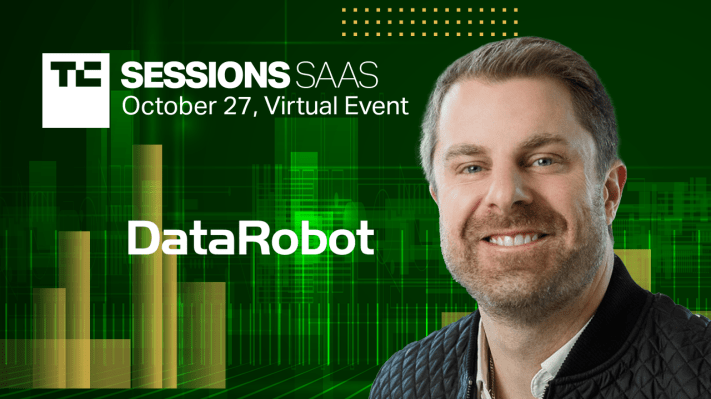 Just about every company is sitting on vast amounts of data, which they can use to their advantage if they can just learn how to harness it. Data is actually the fuel for machine learning models, and with the proper tools, businesses can learn to process this data and build models to help them compete in a rapidly changing marketplace, to react more quickly to shifting customer requirements and to find insights faster than any human ever possibly could.

Boston-based DataRobot, a late-stage startup that has built a platform to help companies navigate the machine learning model lifecycle, has been raising money by the bushel over the last several years, including $206 million in September 2019 and another $300 million in July. DataRobot CEO Dan Wright will be joining us on a panel to discuss the role of data in business at TC Sessions: SaaS on October 27th.

The company covers the gamut of the machine learning lifecycle, including preparing data, operationalizing it and finally building APIs to make it useful for the organization as it attempts to build a soup-to-nuts platform. DataRobot’s broad platform approach has appealed to investors.

As we wrote at the time of the $206 million round:

The company has been catching the attention of these investors by offering a machine learning platform aimed at analysts, developers and data scientists to help build predictive models much more quickly than it typically takes using traditional methodologies. Once built, the company provides a way to deliver the model in the form of an API, simplifying deployment.

DataRobot has raised a total of $1 billion on $6.3 billion post valuation, according to PitchBook data, and it’s been putting that money to work to add to its platform of services. Most recently the company acquired Algorithmia, which helps manage machine learning models.

As the pandemic has pushed more business online, companies are always looking for an edge, and one way to achieve that is by taking advantage of AI and machine learning. Wright will be joined on the data panel by Monte Carlo co-founder and CEO Barr Moses and AgentSync co-founder and CTO Jenn Knight to discuss the growing role of data in business operations

In addition to our discussion with Wright, the conference will also include Microsoft’s Jared Spataro, Amplitude’s Olivia Rose, as well as investors Kobie Fuller and Laela Sturdy, among others. We hope you’ll join us. It’s going to be a thought-provoking lineup.