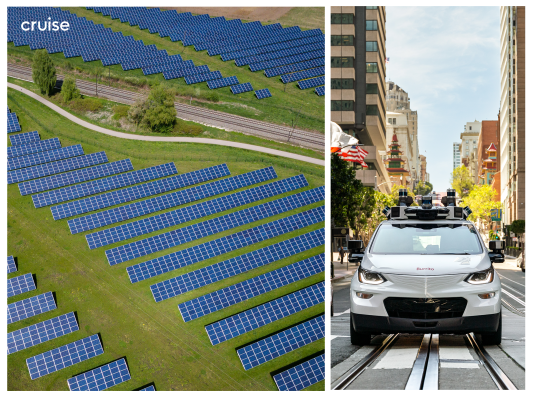 Cruise, the self-driving car company under General Motors, has launched a new initiative called Farm to Fleet that will allow the company to source solar power from farms in California’s Central Valley. The San Francisco Chronicle was the first to report the news that Cruise is directly purchasing renewable energy credits from Sundale Vineyards and Moonlight Companies to help power its fleet of all-electric autonomous vehicles in San Francisco.

Cruise recently secured a permit to shuttle passengers in its test vehicles in San Francisco without a human safety operator behind the wheel. The company is also ramping up its march to commercialization with a recent $5 billion line of credit from GM Financial to pay for hundreds of electric and autonomous Origin vehicles. While this partnership with California farmers is undoubtedly a boon to the state’s work in progressing renewable energies while also providing jobs and financial opportunities to local businesses, Cruise isn’t running a charity here.

The California Independent System Operator has been soliciting power producers across the western United States to sell more megawatts to the state this summer in anticipation of heat waves that will boost electricity demand and potentially cause blackouts. Power supplies are lower than expected already due to droughts, outages and delays in bringing new energy generation sources to the grid, causing reduced hydroelectric generation. To ensure California’s grid can handle the massive increase in fleet size Cruise is planning, it seems that the company has no choice but to find creative ways to bolster the grid. Cruise, however, is holding firm that it’s got loftier goals than securing the energy from whatever sources are available.

“This is entirely about us doing the right thing for our cities and communities and fundamentally transforming transportation for the better,” Ray Wert, a Cruise spokesperson, told TechCrunch.

With droughts continuing to plague California farmers, converting farmland to solar farms is a potential way to help the state meet its climate change targets, according to a report from environmental nonprofit Nature Conservancy. Which is why Cruise saw the logic in approaching Central Valley farmers now.

Cruise is paying negotiated contract rates with the farms through its clean energy partner, BTR Energy. The company isn’t disclosing costs, but says it’s paying no more or less than what it would pay for using other forms of renewable energy credits (RECs). RECs are produced when a renewable energy source generates one megawatt-hour of electricity and passes it on to the grid. According to Cruise, Sundale has installed 2 megawatts of solar capacity to power their 200,000 square footage of cold storage, and Moonlight has installed a combined 3.9 MW of solar arrays and two-battery storage system for its sorting and storage facilities. So when Cruise buys credits from these farms, it’s able to say that a specific amount of its electricity use came from a renewable source. RECs are unique and tracked, so it’s clear where they came from, what kind of energy they used and where they went. Cruise did not share how many RECs it plans to purchase from the farms, but says it will be enough to power its San Francisco fleet.

“While the solar power still flows through the same grid, Cruise purchases and then ultimately ‘retires’ the renewable energy credits generated by the solar panels at the farms,” said Wert. “Through data that we submit to the California Air Resources Board quarterly, we retire a number of RECs equivalent to the amount of electricity we used to charge our vehicles.”

Wert says using fully renewable power is actually profitable for Cruise in California due to the Low Carbon Fuel Standard, which is designed to decrease the carbon intensity of transportation fuels in the state and provide more low-carbon alternatives. Cruise owns and operates all of its own EV charging ports, so it’s able to generate credits based on the carbon intensity score of the electricity and amount of energy delivered. Cruise can then sell its credits to other companies seeking to reduce their footprints and comply with regulations.

Aside from practicalities, Cruise is aiming to set a standard for the industry and create demand for renewable energy, thus incentivizing more people and businesses to create it.

“Transportation is responsible for over 40% of greenhouse gas emissions, which is why we announced our Clean Mile Challenge in February, where we challenged the rest of the AV industry to report how many miles they’re driving on renewable energy every year,” said Wert. “We’re hoping that others follow our lead.”