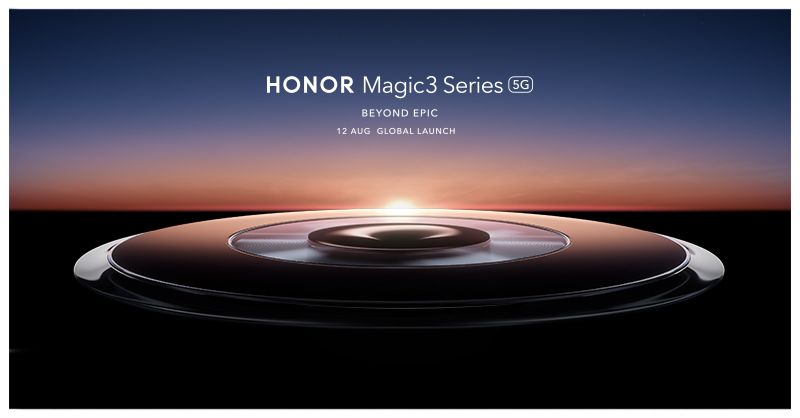 Honor has started sending out invites for the global launch of a flagship product. The invite says that the Magic 3 series will launch on August 12.

While the company hasn’t shared any information about the upcoming phone, however, a quick look at the teaser suggests that this series is going to have camera-centric features and will be 5G capable as well.

The arrival of the #HONORMagic3Series will commemorate the dawn of a new era. 12 Aug — save the date. #BeyondEpic pic.twitter.com/CzcbmsewKeJuly 15, 2021

To recall, the Magic series from Honor comes with innovative design and features. While the first Honor Magic phone had a display that was curved on all four sides and had a pebble-like design, the Magic 2 was announced in 2018 and came with a sliding display.

Unlike the previous Magic devices, the Magic 3 series is going to launch with multiple variants. Based on some leaks, it is rumoured that there could be three different devices with model numbers – ELZ-AN00, ELZ-AN10, ELZ-AN20 which could either translate to a vanilla variant, a Pro variant and a Pro Plus version.

Additionally, the phone will be powered by the latest Snapdragon 888 Plus chipset that was recently unveiled. This was confirmed via a press statement by the president of Honor’s product line, Feng Fei after Qualcomm unveiled the new chipset.

Talking about its highlight, the phone is expected to come with a quad-camera setup and as seen in the leaked images above, the rear camera setup could be placed in a massive camera island on the top centre of the device. The primary camera could be an impressive 48MP 1/1.5” Matrix sensor capable of 100x Zoom.

Can Honor recreate its magic?

Under Huawei, Honor was supposed to launch budget and affordable premium devices. However, after becoming an independent brand, unlike Huawei, it can not only launch flagship devices but can also source chipsets and technology from US companies.

The company is rumoured to be working on multiple premium devices apart from the the Honor 50. These devices include a clamshell-design foldable device and a tablet styled foldable smartphone.

With the restriction lifted, the company can design and launch devices aimed at the global audience, however, it needs to be seen how aggressive the company is in its newfound life. There are some speculations that Honor is still receiving help from Huawei as its phones draw a close resemblance with the ones from its erstwhile parent company.