Walmart will be bringing Symbotic robots to 25 distribution centers 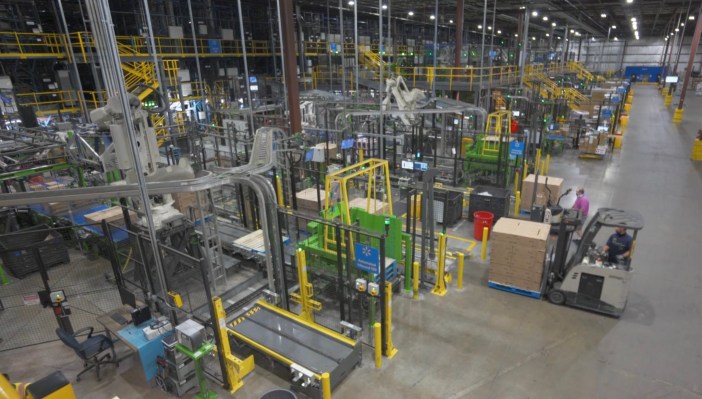 Ask anyone who runs a fulfillment/warehouse robotics company what companies’ top motivation is for embracing automation and they’ll probably cite labor shortages or shipping speeds. The looming truth of the matter boils down to one word: Amazon. And while it’s true that smaller businesses are feeling the worst crunch, no one is immune to the online retailer’s dominance. Not even Walmart.

Today, the fellow retail giant announced its latest robotics partnership, teaming with Massachusetts-based automation company Symbotic. The two announced today an extension of their relationship that will bring robotics to 25 regional Walmart distribution centers. The company says the rollout will take “several years” to complete.

“The digital transformation happening today, alongside evolving customer habits, is reshaping the retail industry,” Walmart’s Joe Metzger said in a release. “To serve customers now, and in the future, our business must provide the right tools and training to our associates so they can deliver the items our customers want, when they want them, with unmatched convenience. We’re investing in our supply chain at an unprecedented scale in order to optimize that process end-to-end.”

Walmart has been aggressive about piloting robots over the last several years, in hopes of expediting some of its processes. As we’ve noted before, however, its results have, thus far, been uneven. Most notable is the case of Bossa Nova Robotics. The startup was thrown for a loop when Walmart ended its contract with the inventory robotics maker. That’s what pilots are for, of course, but that likely doesn’t dull the sting for the smaller company.

Symbotic has a significantly stronger track record, however. The company lists among its partners one of Walmart’s biggest competitors: Target. And while Walmart could be exploring the possibility of acquiring its own startups (à la Amazon, which built its robotics wing atop its acquisition of Kiva Systems), it seems like existing ties could make such a deal a large hurdle.