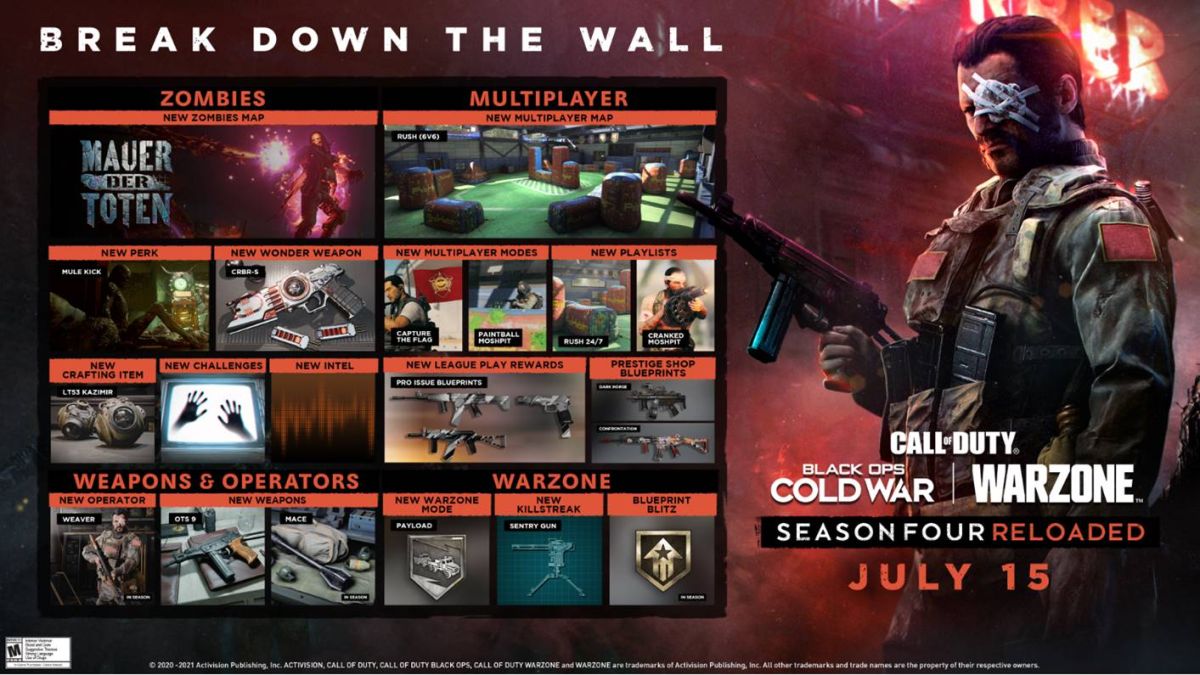 Call of Duty: Black Ops Cold War and Warzone is all set to get the season 4 update that will bring the latest round-based Zombies experience, along with a classic Multiplayer map and new modes. These are hitting Black Ops Cold War, while Warzone receives a brand-new objective mode with Payload and other meta-changing updates.

The new update goes live on July 15 following updates to Black Ops Cold War on July 13 and Warzone on July 14. Along with a new Zombies experience Warzone will receive its newest objective mode, a classic map and modes to arrive in Black Ops Cold War Multiplayer, and more Zombies content to launch alongside “Mauer Der Toten.”

“Mauer Der Toten” is the next chapter in the Dark Aether story which will see an epic battle against the undead in a divided city, arriving with Season Four Reloaded in Black Ops Cold War.

Set after the events of “Operation Excision” in Outbreak, “Mauer Der Toten” is Treyarch’s next round-based Zombies experience where Requiem agents, currently working for Omega Group’s Colonel Kravchenko in a bid for their freedom, will explore war-torn Berlin after a zombie invasion has overtaken the city.

As for Warzone, it is getting two new weapons for close-quarters. These include the OTs 9 SMG, which is a full-auto submachine gun with impressive firepower at close range with good visibility when firing. Reliable recoil control with smaller magazine size. The second is a melee weapon called Mace which is joining over a dozen options in Warzone, and over a half dozen blades and blunt instruments in Black Ops Cold War.

The new operator joining this time is Weaver who arrives from Requiem HQ and is from NATO. Requiem needs every last agent to rescue Raptor-1 from Kravchenko, even if it means calling in strike team leader Grigori Weaver to get the job done.

Weaver will be a playable NATO Operator across Black Ops Cold War and Warzone as part of the Tracer Pack: Weaver Operator Bundle, available in the Store at the start of Season Four Reloaded.

Warzone’s first-ever objective-based game mode is called Payload that is inspired by previous traditional Call of Duty game modes like Call of Duty: WWII’s War Mode. Payload pits two teams of 20 players against each other in a race against time for crucial intel, as these vehicles carry satellite parts that could help shift the balance of the war between Perseus and NATO.

The map Rush returns from Black Ops II and Capture the Flag and Paintball Moshpit are the new modes joining on. From July 22 to July 29, Call of Duty: Black Ops Cold War will have a Free Access period featuring various Multiplayer and Zombies experiences, including playlists around the new map Rush and the entirety of “Mauer Der Toten!” Those who play Warzone will find all their Black Ops Cold War weapons and global level progress intact within the trial, and any progress earned during the trial will carry right back over to Warzone.