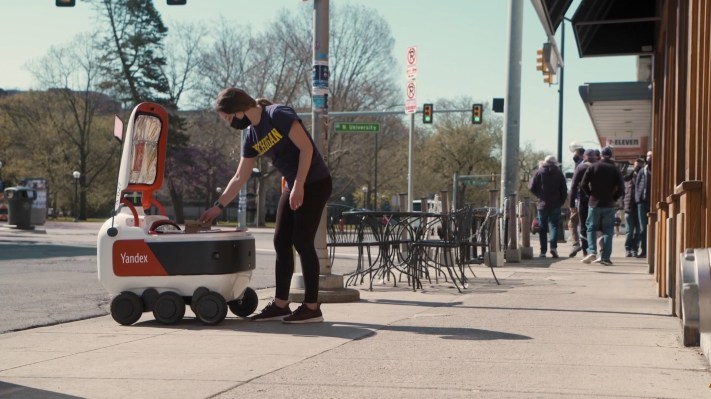 Yandex Self-Driving Group, a unit of Yandex, the publicly-traded Russian tech giant, has announced a partnership with food delivery service Grubhub to be its multi-year robotic delivery provider across American college campuses. Yandex will begin operating this fall with dozens of vehicles, according to Dmitry Polishchuk, CEO of Yandex Self-Driving Group, and hopes to reach over 250 campuses.

Last September, Yandex’s self-driving unit spun out from a joint venture with Uber. In May this year, the company said it clocked a total 7 million autonomous miles, which was more than Waymo at the time. Yandex has been developing full-sized autonomous vehicle technology since 2017, which it’s tested in Tel Aviv, Israel and Ann Arbor, Michigan, as well as Innopolis, Russia via its robotaxi fleet. The company first began public deliveries on its six-wheeled, 150-pound robot, the Yandex.Rover, last April in Skolkovo, Russia, using the same self-driving technology stack as the company’s autonomous cars.

“The technology is definitely very complicated, but we can see that it has already reached the level when it can start being deployed either in form of delivery robots or robotaxi services in small towns or specific districts of big cities,” a spokesperson told TechCrunch. “We believe that in three to four years the technology will reach the level where the car can drive as safe and as efficient as an experienced human driver in rush hour in the center of cities like Moscow or New York.”

Yandex’s approach to commercialization is unique. Of all the companies developing autonomous technology for cars, Yandex is going to market with its robots first, “and it seems to be a pretty efficient way to do it,” said the spokesperson. “It took us two years to get from the idea of making a delivery robot in June 2018 to signing such a solid commercial contract,” she said.

According to a statement by the company, Yandex.Rovers, which move at three to five miles per hour, can navigate pavements, pedestrian areas and crosswalks. They’re ideal for campus areas not accessible by car, and the service has already been fully integrated into the Grubhub app. From the user experience side of things, once the rover reaches its destination, the customer receives a push notification and comes outside to open the robot’s hatch through the app.

Yandex says its delivery robots can operate day or night, rain or snow, in controlled or uncontrolled pedestrian crossing scenarios. The rovers operate autonomously most of the time, but if they get into a complicated situation, they may send a request for remote assistance, according to a spokesperson for the company. The robots have already been tried and tested commercially in Russia via the food delivery platform Yandex.Eats and the express grocery delivery platform Yandex.Lavka.

“Together with Yandex, we’re changing the way college students experience food delivery,” said Brian Madigan, vice president of corporate and campus partners at Grubhub, in a statement. “We’re excited to offer these cost-effective, scalable and quick food ordering and delivery capabilities to colleges and universities across the country that are looking to adapt to students’ unique dining needs. While college campuses are notoriously difficult for cars to navigate, specifically as it relates to food delivery, Yandex robots easily access parts of campuses that vehicles cannot — effectively removing a major hurdle universities face when implementing new technology.”

The company said it also intends to continue developing its robotaxi service as it moves to commercialize more arms of the business and use its AV tech in a range of scenarios.