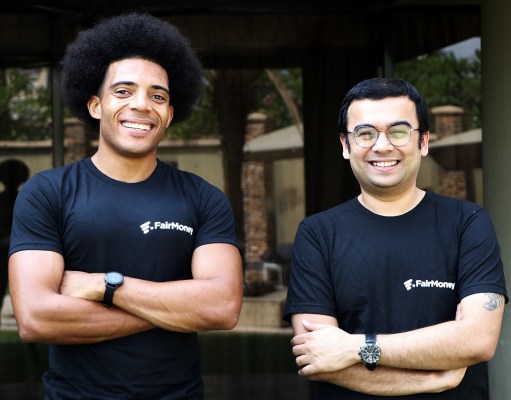 Neobanks have led the charge as regards venture capital funding for consumer fintech startups. But while they have collectively dominated the fintech space, they don’t operate a monolithic model.

There are five distinct models, and the one adopted by Nubank, the $30 billion behemoth, is the credit-led model. Neobanks operating this model start by offering credit via cards or on an app and subsequently offer bank accounts as a gateway to other services.

Nigerian fintech startup FairMoney operates this model. Today, it is announcing a $42 million Series B raise to diversify its offerings and expand to “become the financial hub for its users.”

Founded in 2017 by Laurin Hainy, Matthieu Gendreau, and Nicolas Berthozat, FairMoney started as an online lender that provides instant loans and bill payments to customers in Nigeria.

When CEO Hainy spoke to TechCrunch in February, the company was six months into its expansion to India. One of the highlights of that discussion was FairMoney’s impressive numbers in 2020. Last year, the company disbursed a total loan volume of $93 million to over 1.3 million users who made more than 6.5 million loan applications.

The company also made some progress on the India front, processing more than 500,000 loan applications from over 100,000 unique users.

So what has changed since then? For one, Hainy says FairMoney ticked one of the goals which was acquiring a microfinance bank license. The license allows FairMoney to operate as a financial service provider in Nigeria.

“We have received our MFB banking license which now enables us to open current accounts for our users, and we’re doing that on quite a big scale,” Hainy said to TechCrunch. “We opened accounts for our repeated and new customers, which I think is quite a unique company strategy because we don’t need to burn millions of dollars of customer acquisition cost on users like other competitors. I think all of that has enabled us to become sort of the largest digital bank in Nigeria.”

Quite the claim but behind it are figures to back it up. Of the company’s current 3.5 million registered users, 1.3 million are unique bank account holders. The company says it is projecting to disburse $300 million worth of loans to them this year. How will it finance that? By raising bonds. FairMoney’s loan book is grown by its capital markets activity and has convinced some investment banks to invest a substantial amount in its unlisted bond.

The credit-led neobank offers loans to individuals from ₦1,500 (~$3) to ₦500,000 (~$1,000) ranging from days to six months. Small business loans have become a prominent service most digital banks have begun to offer in Nigeria’s retail sector, and FairMoney sees an opportunity there. Hainy states that from now on, the company will start servicing loans to registered SMEs in Nigeria. In the works also is the issuance of cards. However, unlike the credit cards operated by Nubank, FairMoney is shipping debit cards, the more prevalent one in the Nigerian market.

“The ambition is that by the end of the year, the customer has the full-fledged banking experience from P2P transfers and lending to debit cards and current accounts. In addition to that, we are working on a number of additional services from savings products, stock trading, and crypto-trading products potentially depending on where regulation is heading,” Hainy added.

But while most African companies, after completing a Series B raise, think about expansion, it’s a different case for FairMoney. Hainy calls this a ‘focus round’ and says FairMoney wants to consolidate its position in Nigeria and India; therefore, it is not considering any expansion to other markets.

“We feel that with India and Nigeria, we have tons of work to do and tons of problems to solve. We are doubling down on the Nigerian opportunity, which is building out more banking services and becoming one of the commercial banks in the country. And then India by building a large credit book there,” the CEO combined.

African fintech startups have attracted a lot of capital this year and they continue to do so. So far, the continent has seen three nine-figure raises, all from fintech companies Flutterwave, TymeBank and Chipper Cash. There’s also one reportedly in the works from OPay.

Nigerian fintechs are leading the crop as exciting startups keep coming from the country week in week out, gaining access to capital at an astonishing rate.

It is not news that while local investors are cutting checks at pre-seed and seed levels, and sometimes Series A, international investors control the continent’s latter stages. TymeBank cited U.K. and Philippines venture capital firms as investors. For Chipper Cash, it was SVB Capital, Ribbit, and Bezos Expeditions, while Avenir Growth Capital and Tiger Global invested in Flutterwave.

In FairMoney, Tiger Global has made a return to the continent. Per public knowledge, it is the first time the U.S. hedge fund is investing in two African startups in a year. “We are excited to partner with FairMoney as they build a better financial hub for customers in Nigeria and India,” Scott Shleifer, partner at Tiger Global, said in a statement. “We were impressed by the team and the strong growth to date and look forward to supporting FairMoney as they continue to scale.”

Hainy calls the investment a great industry signaling for the continent. He believes Tiger Global decided to back FairMoney because the company has been able to scale tremendously and shown that it can operate banking and lending while running a profitable business when most of its counterparts are not.

“I think what most people have been discussing is the question of sustainability. How long can digital banks operate as financial service providers while making losses? So I think that’s another great signal for the market that we’ve actually managed to do that in a profitable manner, providing upside for our shareholders and also showing our clients that they can actually bank on us in the future,” Hainy added.

And to achieve its goal to become a financial hub for its customers’ banking needs, the CEO said the company is embarking on a hiring spree for top talent. “We are hiring worldwide, and there are 150 open positions out there right now that we’re trying to fill with strong talent to help us build the financial app for Nigerians.”