Socceroos vs Jordan: how to watch the World Cup qualifier for free Trent Sainsbury of Australia fights for the ball against Jordan 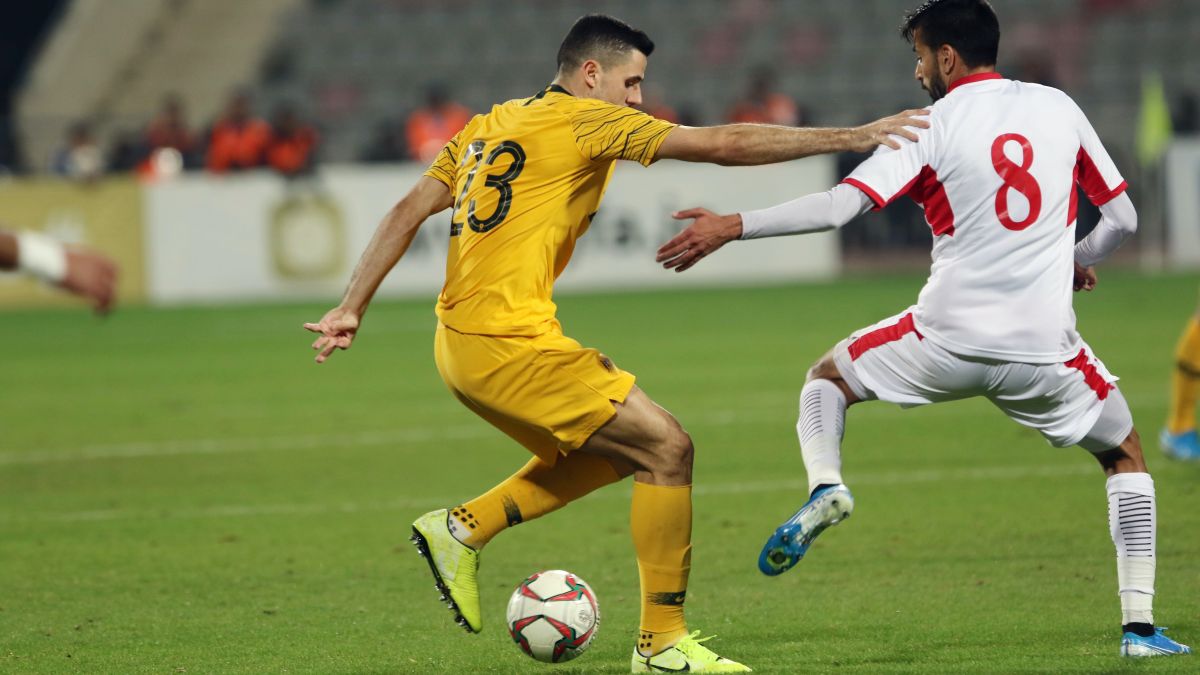 After winning all of their past seven games, the Socceroos have secured a spot in the third round of qualifying for the FIFA World Cup. In Wednesday’s match against Jordan, they’ll be looking to make it a perfect eight from eight finish. The game against Jordan kicks off on June 16 at 2am AEST.

The Socceroos are comfortably placed at the top of the leaderboard with 21 points, but the team’s coach Graham Arnold isn’t looking for an easy cruise to the finish line. Arnold says he’ll use his best players against Jordan, after rotating the roster against Chinese Taipei and Nepal.

The coach promised fans that Adam Taggart would return to the field at some point during the match, after the Socceroos striker spent some time on the bench due to a groin injury. The team’s top goalkeeper Mat Ryan is also expected to return.

With Jordan only claiming three wins from their past six games, Australia appear to be in good shape to claim another victory today – Jordan are currently second in the group with a total of 14 points.

If you’re keen to catch the action, we’ve laid out how you can watch the Socceroos World Cup Qualifiers from Australia live and free.

Socceroos World Cup Qualifiers: how to watch online for free

There are a number of ways to watch the Socceroos in their World Cup Qualifiers, including ABC, Foxtel’s Fox Sports and Kayo Sports. However, if it’s a free watch you’re after, then ABC or Kayo Freebies is the place to be.

All of the Socceroos World Cup Qualifying matches will be streamed live and free on Kayo Freebies, which is a no-cost tier on the sports streaming service.

The free subscription option has a selection of live and on-demand sports, shows and documentaries that will be available to all Australians for free, including select Matildas matches and the A-League finals to name a few.

While Kayo Freebies will get you access to Australia’s qualifying matches, you’ll need a paid subscription to watch other countries make their play for the 2022 FIFA World Cup.

A basic Kayo Sports subscription costs AU$25 a month, which includes simultaneous streams on two screens. And if you’re looking to watch on more devices, the premium package will give you three screens for AU$35 a month. For more details, see below.

Socceroos World Cup Qualifiers: how to watch from outside Australia

While most of us aren’t doing much travelling at the moment, if you are an Aussie currently abroad who wants to catch the free coverage on ABC or Kayo Freebies, you’ll discover that access is geo-blocked.

It’s not unsurpassable, as you could try using a VPN to set the IP address of your laptop, phone or tablet back to one in Australia and watch as if you were in the country. TechRadar’s top VPN recommendation is ExpressVPN.