How innovation and carbon are shaping future LNG supply Innovation

LNG might be the last great growth opportunity in oil and gas. But the difficult investment environment and buyers’ appetite for low-carbon LNG are among the challenges facing developers. Giles Farrer, Director of LNG, talked me through his latest thinking.

Why is the outlook for LNG so promising?

Much of it’s about Asia, where energy demand is growing, and gas can help achieve net-zero targets by displacing higher carbon intensity coal in the power sector. We expect LNG demand to increase from 360 mmtpa today to 800 mmtpa in 2050. LNG demand is resilient even in our 2 °C scenario.

Is the industry lining up new supply?

We expect few new FIDs for two years. Qatar’s giant North East Field, FID’d early this year, soaks up most of the contestable market until 2027/28. But there’s a supply gap of 50 mmtpa in 2030 that widens alarmingly to over 170 mmtpa by 2035.

There are plenty of projects in the pipeline, but buyers are hesitant to commit to long-term contracts after the volatility of commodity prices in the last year. Equally, developers are still recovering from the financial effects of the 2020 crisis and have little appetite to invest. Giant, long-payback, capital-intensive LNG projects with modest returns are the last things IOCs and NOCs want to do. At the same time, LNG is increasingly competing for scarce capital with renewables as Euro Majors diversify.

Low cost wins – that’s Russian Arctic projects (Obskiy LNG, for example) and more Qatar phases. Incremental projects in Australia with LNG-focused operators might also be early movers. There are a lot of big projects vying for a market opening at the end of the decade with breakeven prices ranging from US$6.50/mmbtu to US$7.50/mmbtu (delivered to Asia). The focus over the next few years for Rovuma (Mozambique), Papua LNG, further phases at Tortue (Mauritania/Senegal), LNG Canada, and multiple brownfield and greenfield US projects is to drive costs down.

Do US projects have advantages?

Third, US infrastructure funds are hot for LNG assets. Unlike the giant, integrated LNG projects elsewhere in the world, there’s no upstream component in US projects – the gas is sourced from the market. Liquefaction and processing are utility-like assets, offering modest returns that don’t do it for Big Oil. But they’re attractive to infrastructure investors. We’ve also seen these investors move down the value chain into LNG shipping, LNG-to-power and small-scale LNG distribution.

What about the high carbon footprint of US gas?

That’s the Achilles heel. LNG buyers increasingly want to buy low-carbon LNG. Singapore’s Pavilion in March 2020 issued the first tender for LNG with specific criteria to measure the carbon footprint of LNG to be delivered under the contract. Low-carbon LNG is still a tiny part of the market – just seven of the 5,500 cargoes shipped last year were ‘carbon neutral’ – but it’s going to grow fast as utilities strive to meet net-zero targets.

The US problem is upstream; specifically, the high carbon-intensity of Lower 48 gas. French utility Engie cancelled a contract to buy US LNG in Q4 2020 for this very reason. We’re starting to see US producers change behaviour, stopping routine flaring and setting targets to reduce methane leakage. But it’ll take years of tighter control – regulation or industry-led – before US upstream gas competes on carbon intensity with global basins.

In the meantime, buyers can buy from US developers that source gas either from low-emissions producers or from basins with lower emissions (say, the Eagle Ford rather than the Permian). They will also favour liquefaction plants that use renewable electricity and have CCS. US developers are starting to respond to buyers’ needs – Cheniere has committed to provide customers with the GHG emissions profile of every cargo it produces.

What’s the LNG industry doing to cut its own emissions?

We’ll see more carbon capture and storage. As well as pricing competitively, Qatar Petroleum won the lion’s share of the Pavilion tender partly because it was implementing CCS and reducing carbon emissions from processing and liquefaction. Others following this path include Novatek (Arctic LNG), Next Decade (Rio Grande, US) and BP (Tangghuh).

Where can Wood Mackenzie help the LNG industry on emissions?

Wood Mackenzie’s LNG Carbon Emissions Tool provides an independent source of LNG-related emissions estimates along the value chain from wellhead to burner tip. LNG buyers, sellers and traders can estimate emissions associated with specific cargoes based on their source, vessel type and destination (and benchmark the emissions from different projects to specific destinations). The tool is now being widely used in LNG contracts to estimate the emissions associated with specific cargoes for offsetting purposes. 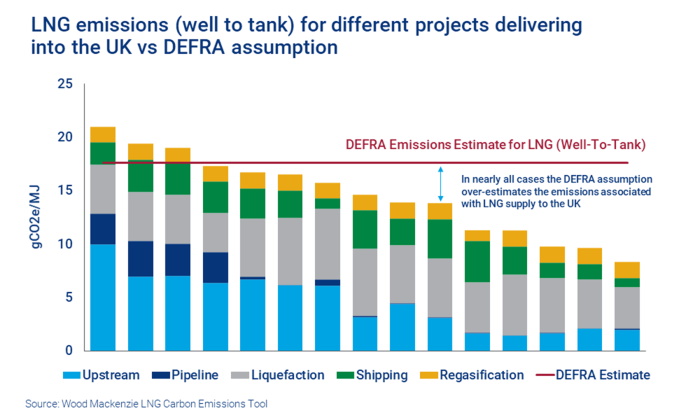