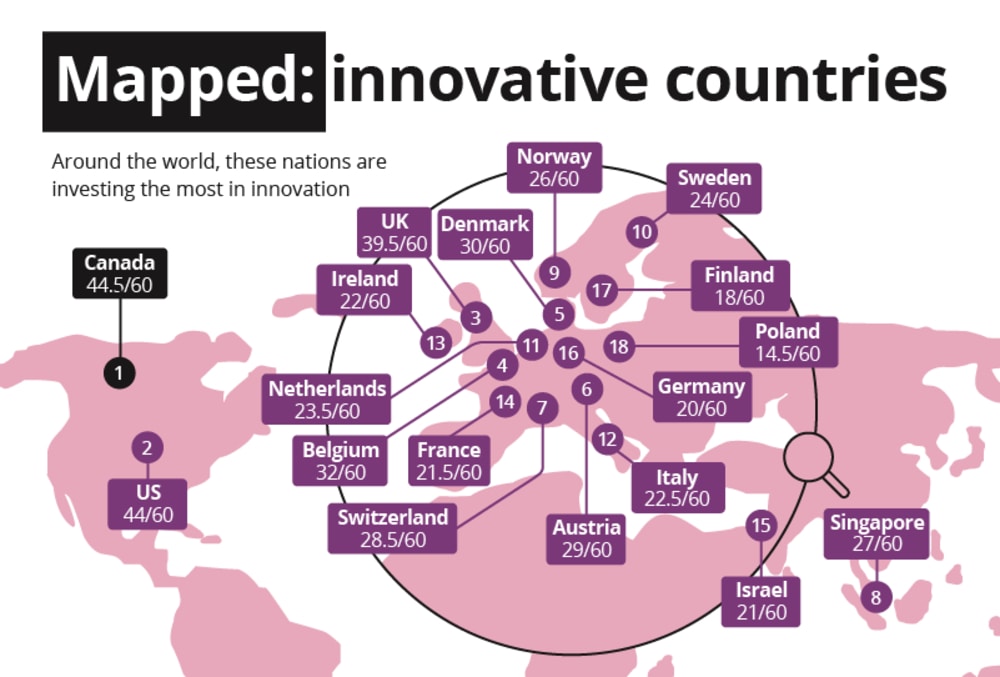 The United Kingdom, Belgium and Denmark are three of Europe’s most innovative economies. This is evident from a six-factor survey of funding sources. Some of the factors looked at were the number of start-ups, number of companies per capita and the number of patents issued.

Within a single decade, the number of patents has increased by no less than 1,200 percent

p id=”block-53de4260-8ffc-4253-94b8-6fed2f9b7ff6″>The UK in the pre-Brexit era scores particularly well due to a high average of start-ups. Belgium ranks highest in terms of access to readily available grants (subsidies), while Denmark has the highest number of subsidies for innovation.

Companies in Israel file the most number of patents in terms of percentages, which is a key factor in innovation. Between 2010 and 2019, nearly 90,000 patents were approved in Israel. That corresponds to an annual increase of 12.5 percent. Ireland is at number two, followed by Austria.

If we take a closer look at the ratio between the number of patents filed and the number granted, a surprising “winner” emerges with Italy as number one. 70% of all applications there received the green light over a period of ten years. It is not clear whether the cause is due to the fact that Italian patent applications are filed more carefully, or that the Italian patent center is more flexible.

As a matter of fact, the year 2017 was the most innovative year of the decade if we take this parameter (percentage of patents filed vs. granted) as a benchmark.

The “innovation investment index” is compiled by Money, an independent financial comparison service from the United Kingdom. The index is a summation of key indicators of innovation in eighteen countries from mainly North America and Europe. However, it is still too early to hang gold, silver and bronze on the winning European trio (UK, Belgium and Denmark) just yet. In the overall ranking, Canada and the United States are doing even better.

Read about how patents lead to more sales here.