What Would It Take to Actually Settle an Alien World? 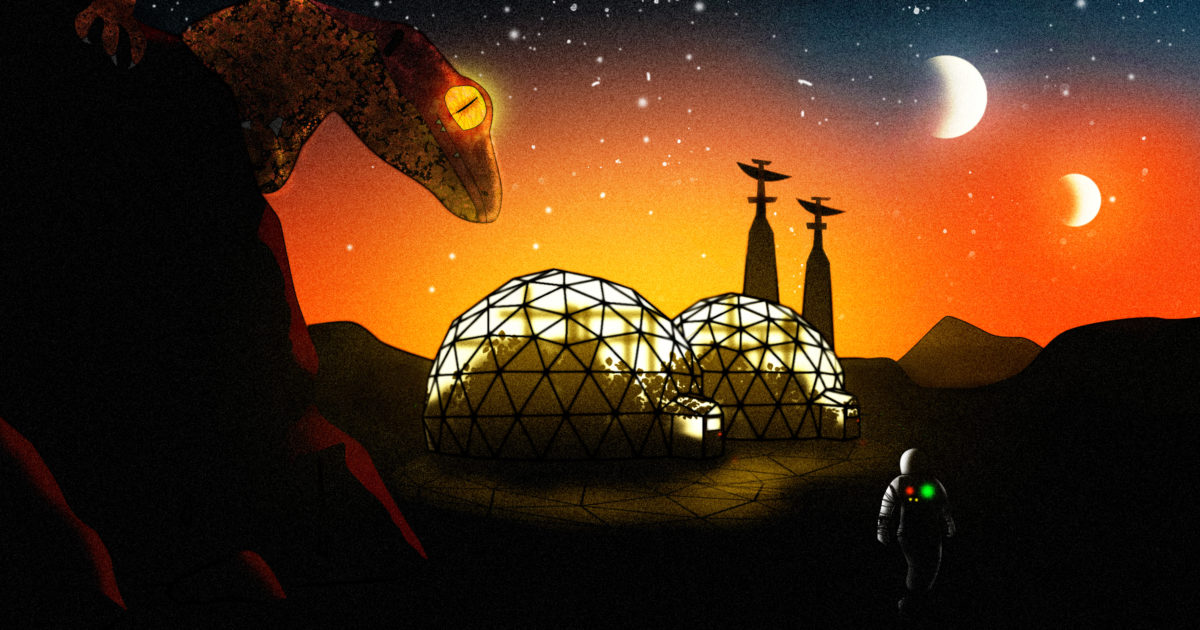 David Gerrold is the author of dozens of science fiction books, including The Martian Child and The Man Who Folded Himself. His new novel Hella, about a low-gravity planet inhabited by dinosaur-like aliens, was inspired by the 2011 TV series Terra Nova.

“The worldbuilding that they did was very interesting, very exciting, but because I was frustrated that they didn’t go in the direction I wanted to go, I was thinking, ‘Let me do a story where I can actually tackle the worldbuilding problems,’” Gerrold says in Episode 454 of the Geek’s Guide to the Galaxy podcast.

Hella goes into enormous detail about the logistics of settling an alien world, and grapples with questions like: Would it be safe for us to eat alien proteins? Would it be safe for us to breathe alien germs? What effect would plants and animals from Earth have on an alien ecology? It’s a far cry from many science fiction stories which assume that alien planets would be pretty much like Earth. “My theory is that there are no Earthlike planets, there’s just lazy writers,” Gerrold says.

Hella is told from the point of view of Kyle Martin, a neurodivergent young man who struggles with social niceties but possesses a wide-ranging curiosity for technical details. Gerrold says that telling the story from Kyle’s point of view meant making the worldbuilding in Hella especially rich.

Gerrold hopes that Hella will make readers think more carefully about the effect that our actions can have on ecosystems here on Earth. “I’ve seen articles that suggest that faster-than-light travel and colonizing planets around other stars is simply beyond our technical abilities,” he says. “I hope they’re wrong. But as a thought experiment, going to another world and discovering what’s different, it’s a chance to consider how things are on this planet too.”

Listen to the complete interview with David Gerrold in Episode 454 of Geek’s Guide to the Galaxy (above). And check out some highlights from the discussion below.

David Gerrold on Tunnel in the Sky:

“I think that what [Heinlein] realized at some point is what you actually need to survive is partnership with other human beings, that individualism is an illusion. Because Tunnel in the Sky, all the human beings on the planet, all the kids there, have to get together and protect each other and work together to survive. And I think that’s a very important point that a lot of fiction misses. A lot of fiction is about, ‘The hero goes in and solves the problem by himself. He’s the big mighty warrior.’ And while that’s very exciting, what we see in real life is that a lot of problems really get solved by teamwork and partnership.”

“When you go and colonize a planet, you don’t arrive with Martian war machines and burn down the cities. You arrive with your entire ecology, because if you intend to live on a planet, you need your entire ecology. You need your microbes, at the bottom level, because the microbes handle what goes on in the soil so that the plants that you’re going to bring — your corn and your beets and your turnips and everything else — their roots feed on what the microbes do in the soil. And then you need all the insects that pollinate your plants, and then you need the things that keep your insects in check. If you’re going to bring chickens, you need things for the chickens to eat. So you bring your entire ecology.”

“John Varley actually made [characters changing sex] work better than anybody in his Eight Worlds series—most of his books take place in that environment. He would have characters change sex, and be genderfluid, and bisexual, and he did it casually—he didn’t explain how it was done. Nobody called any attention to it, it was just part of the story. And I thought, ‘Oh, I could do that. Let me try that.’ So I didn’t explain how characters change sex on Hella. I had an idea in my head, but I didn’t bother to lay it out, because I didn’t want to get into the biology of it. But I figured it would just be like John Varley’s world—once you have the technology, people are going to use it.”

“I think at the time I was having a little fun by creating a character who was a little bit like Harlan—because Harlan could be an agent of chaos too—but as I developed the character of HARLIE, he is nothing like Harlan. Bob Bloch was toastmaster at one of the Nebula banquets, and he was making a lot of jokes, and I was so pleased to actually be one of his jokes. He said, ‘There’s this new book called When HARLIE Was One. Harlie, of course, claims he isn’t one.’ We got a good laugh out of that, and I thought, ‘Wow. Bob Bloch noticed me. He noticed my book. How cool.’ So there was a certain small amount of reference to Harlan, but nothing serious.”