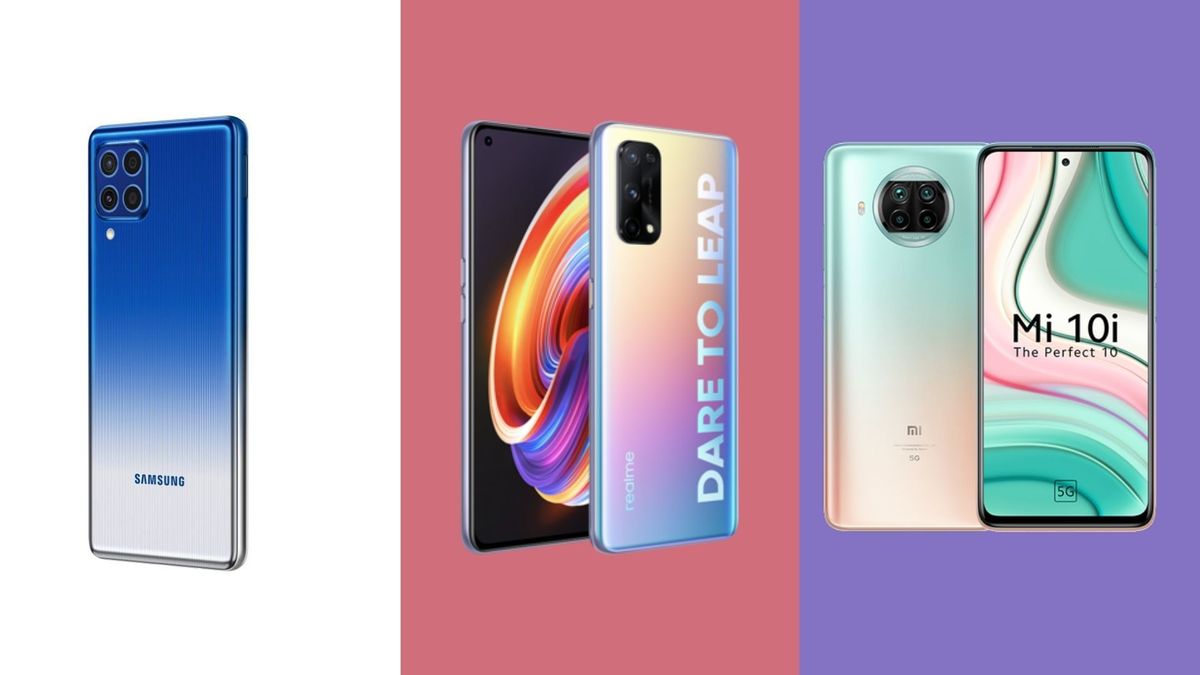 In a little over a month or so, we’ve seen three devices launched by three different brands. All three claim to offer true value for buyers’ money, hence we thought of pitting the three – Samsung Galaxy F62, Xiaomi Mi 10i, and Realme X7  to see which of these makes the best cut.

The Samsung Galaxy F62 is the latest addition to the list and is a slightly updated Galaxy M51 but intended to sell exclusively through Flipkart. The phone will start retailing from February 22 onwards.

The Realme X7 was launched a few days back along with its pricier sibling Realme X7 Pro and is a member of a limited club of phones in the country that are powered by a MediaTek Dimensity chipset. The phone is available to purchase on Flipkart and is currently sold via flash sales.

And the Xiaomi Mi 10i is the oldest among the three, having arrived in January this year. Both Mi 10i and Realme X7 are the cheapest 5G devices from their respective companies.

A Caveat: While these comparisons aim to pit similarly priced competing devices against each other, we may or may not have used all of them. We are using our collective experience and expertise to suggest which one of the options could make the cut.

The Galaxy F62 is available in a couple of variants based on memory though storage on both remains fixed at 128GB. When it comes to pricing, the Galaxy F61 starts at Rs. 23,999 for the 6GB variant and the 8GB variant is priced at Rs 25,999. The phone is available in three colour options – Laser Green, Laser Grey and Laser Blue.

The Realme X7 is also available in two variants based on memory and comes with 128GB of onboard storage. The 6GB RAM variant is priced at Rs. 19,999 and the 8GB RAM version will set you back by Rs. 21,999. The Realme X7 comes in Blue and Fantasy White colour options.

In terms, of pricing and storage combinations, all three devices look identical, though on paper the Xiaomi Mi 10i does have one variant extra. However, that is just for the paper and perhaps may not see the light of the day. On the other hand, the Galaxy F62 is the costliest among the three.

When it comes to design, the Galaxy F62 isn’t a unique design. One might even end up mistaking it for one of the new Moto devices thanks to the camera module placement. The rear panel design though carries a minimalist look and only has a small branding at the bottom, the F62 doesn’t impress compared to the other two devices in the discussion. Also, the selfie camera is placed under the punch hole cutout and sits at the top centre of the display.

The design of the Realme X7 might appear common since Realme is known for flooding the market with way too many similar-looking devices. Still, the camera module placement and the gradient colour finish makes it a stunner.. That said, Realme has gone way too extreme with the branding by using bold fonts for its punchline “Dare to Leap.”

It is indeed a daring step from the brand to expect its consumers to become an advertising hoarding on the move. So, as much as the gorgeous colour scheme eggs you to keep the phone coverless, the cringe-worthy branding could force you to snap on a case as soon as you pull the phone out of the box. That said, this also could be subjective. The selfie camera on this phone as well is housed under a hole-punch cutout and is non-intrusive as it sits on one side of the display.

When it comes to design, the Mi 10i borrows its design language from the Poco X3. The placement and design of the camera module is exactly the same. The selfie camera here as well sits under a hole-punch cutout at the front and sits in the top-centre of the display.

The gradient finish and the minimalist branding that sits at the bottom on the rear panel of the phone, makes it look absolutely gorgeous and premium. The Pacific Sunrise colour of Mi 10i surely has all the ingredients to make it the best-looking device in this category and you would definitely want to show off your prized possession.

The Galaxy F62 comes with a 6.7-inches sAMOLED display with Full HD+ resolution. This massive display comes with a 60Hz refresh rate while the phone comes has  128GB of onboard storage. In terms of memory, you get a couple of options – 6GB and 8GB of RAM. The onboard storage is capped at 128GB but the phone supports expandable storage. On the optics side, it has a quad-camera setup with a 64-megapixel primary rear camera, 12-megapixel ultra-wide-angle camera, 5-megapixel depth sensor, 5-megapixel macro camera and a 32-megapixel camera on the front.

The F62 has a 7000 mAh battery with a 25W charging support and runs on Android 11 out of the box with OneUI 3.1 running on top. That said, the phone doesn’t support 5G connectivity.

The Realme X7 comes with a 6.5-inch AMOLED display with Full HD+ resolution, 60Hz refresh rate and in-display fingerprint sensor. On the storage and memory side, it is available in 6GB and 8GB memory options with the maximum of 128GB onboard storage. The phone features a triple camera setup with a 64-megapixel primary rear camera along with an 8-megapixel ultra-wide sensor, a 2-megapixel retro camera, and a 2MP black and white portrait camera.

The Realme X7 comes with a 4310 mAh battery with a 50W charging support and runs on Android 10 out of the box with Realme UI running on top.

Last but not the least, the Xiaomi Mi 10i rocks a 6.67-inch LCD panel boasting Full HD+ resolution and 120Hz refresh rate. It offers you a choice of 6GB RAM or 8GB RAM coupled with 128B of onboard storage. The phone comes with a 108-megapixel primary sensor, 8-megapixel ultra-wide-angle lens, 2-megapixel super macro and a 2-megapixel camera for portrait shots. On the front, it has a 16-megapixel selfie shooter.

While all three devices look to offer solid performance, at least on paper, the devil lies in the details and none of them seems to be perfect.

The Galaxy F62 boasts a massive 7000 mAh battery that should ideally last over 2 days for most, has a gorgeous AMOLED panel and is the only one out of the three that runs on Android 11 out of the box. With such a massive battery pack 25W charging solution doesn’t do justice as it takes a long time (read ages) to charge. Even the additional depth sensor and macro shooters seem to be better on paper. However, the phone runs on a dated Exynos chipset that powered the Galaxy Note 10 series from 2019.

The phone is basically a Galaxy M51 with some minor updates that include an in-house chipset and is Rs. 1,000 costlier as well. At this price point in 2021 not packing a higher refresh rate is almost criminal. Mind you this phone is as bulky as it can get and is limited to 4G connectivity, hence not future proof.

The Realme X7, on the other hand, is slightly compact, boasts an AMOLED panel with in-display fingerprint sensor but the refresh rate maxes out at 60Hz. While the retail package includes a 50W charging brick, the phone does support up to 65W charging. With 50W as well, you can go from 0-80% in a matter of minutes.

Apart from the primary 64-megapixel sensor and the 8- megapixel ultra-wide shooter, the rest couple of them are gimmicky. Since it supports 5G, you’ll not have to scamper to upgrade to a new device when 5G finally arrives in India.

The Mi 10i, on the other hand, look the best among the three – at least on papers with a 5G supported chipset, pricing, design, a 108-megapixel sensor, 4800 mAh battery and Adaptive sync variable refresh rate to switch between 120Hz, 90Hz, 60Hz, 50Hz, 48Hz and 30Hz. The impact of high refresh rate can be felt when you use the phone for graphic-intensive tasks or gaming.

But the phone is bulky and has a non-existent variant. No point in waiting for the 64GB variant as the company doesn’t intend to launch it nor does 64GB solve any practical purpose in 2021. Further, it comes with an LCD panel that may force you to think twice before buying in case you prefer that punchy colour reproduction of an AMOLED panel.

Looking at all the pros and cons, the Mi 10i gets the numero uno position in our listing closely followed by the Realme X7 with the F62 bringing up the rear. For the Samsung Fanboys, it is better to purchase the M51 as it is not only cheaper but has a Snapdragon chipset while the previous generation Exynos chipsets were prone to various issues including heating.