KYOTO, Japan — Few things reigned supreme in a year dominated by the pandemic quite like Animal Crossing: New Horizons, Nintendo’s newest installment of the long-running series that has been credited with saving the mental health of those stuck inside their homes for weeks on end.

Despite the lofty heights the game has reached, surpassing 26 million units sold since its release in March of last year, it comes from humble beginnings, spawning from an open-minded corporate culture that encourages out-of-the-box ideas from employees.

For those unfamiliar with the phenomenon, Animal Crossing is a social simulator game that gives players their own deserted islands to customize. Other players, or “villagers,” can visit the islands and interact with each other. This creates a new world for people who are often left isolated and cannot visit friends and family during times of government lockdown.

The idea for the game — and many others — was inspired by the idle chatter among colleagues at Nintendo’s development team, a common occurrence at the company’s headquarters here in Kyoto.

Hisashi Nogami, the producer of the series, was recently seen taking part in such whimsical banter with a senior colleague at work. Nintendo values idle chatter among employees, a corporate culture that has helped produce a series of hits. (Photo courtesy of Nintendo)

“Insects are structurally different from other living creatures,” said the team member. “Maybe they rode in on a meteorite that flew in from outer space.”

“But exoskeletons are a pretty straightforward way of designing something,” Nogami replied.

“I see,” said the colleague, “then that means it is us beings with internal skeletons that came from space.”

These seemingly bizarre conversations are an everyday affair at Nintendo’s development division. The threads are not expected to arrive at any plausible conclusion, but what they generate are bursts of insights as participants continuously spitball pet theories.

These aimless talks serve to break down things into smaller elements, which are then pieced together to formulate new ideas. What matters is that no one has to think about where or how to start a conversation.

The Animal Crossing franchise, which began in 2001, came about when Nogami, now 49, found it difficult to immerse himself in video games after work with his newlywed wife in the same room.

Nogami later spoke with an older colleague who was similarly harried by child care.

“We need a game that makes you feel like you’re playing with others.”

“The game should let you quit at any time and leave you feeling satisfied.”

From their experiences, the two hashed out the concept of an open-ended game where players can socially interact with each other.

This sense of innovation passed on through generations of Nintendo employees has also led to Animal Crossing becoming a hit series.

Aya Kyogoku, the series director, has been playing Nintendo games for as long as the 39-year-old can remember. Kyogoku was inspired to chase after Shigeru Miyamoto, Nintendo’s creator of Super Mario Bros., Legend of Zelda and other era-defining titles. “Those who love their jobs are always thinking about work in the back of their minds,” said Kyogoku.

Miyamoto epitomized that observation. He thought up the Wii Fit game while keeping track of his weight during his diet. Pikmin, a series starring plantlike creatures, can be traced back to the vegetable garden Miyamoto tended at home.

From her observations of Miyamoto, Kyogoku learned that valuable output can come from idle chatter. From there, Kyogoku became a steadfast believer in constantly drawing inspiration from real-life experiences and building upon them.

For example, in Animal Crossing, one can exchange turnips for money and vice versa at the Stalk Market. As the pun suggests, its framework resembles a real-world stock market replete with the price fluctuations. If a player wants to add more rooms to the house, they need to take out a loan.

These features are the source of oft-said gripes among enthusiasts about “losing money in the stalk market,” or “having a loan balance,” which may be confusing to the ears of the uninitiated.

The appeal of Animal Crossing is that “anyone can become interested because it’s connected to reality,” said Kyogoku. The series made it a point of avoiding creating a distinctly different word of its own in order to draw fans from across a broad spectrum.

“I need to keep doing new things so that nobody will ask if I retired,” said Miyamoto, 68, who now holds the title of representative director at Nintendo.

Those words echo the credo observed by the company’s development team: do what others haven’t done before.

It is the spirit of a Kyoto company that takes pride on not being such into the trends of Tokyo.

“I don’t think there has been much failure up to this point,” said Miyamoto. “The batting average is .700 or so.” 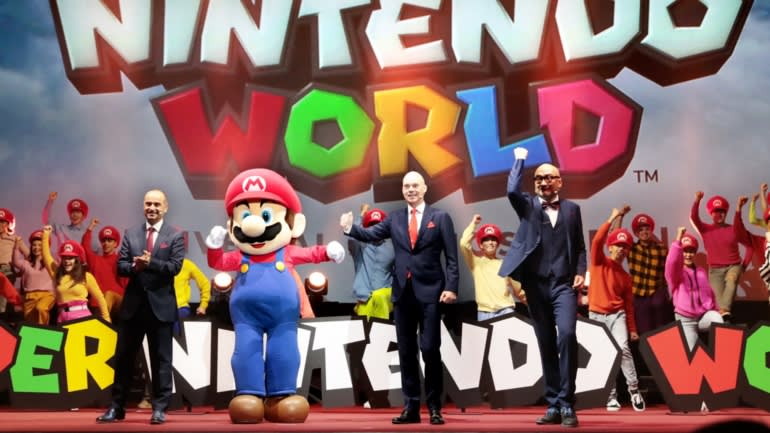 The opening of Super Nintendo World at Universal Studios in Osaka has been delayed due to the state of emergency order.

Nintendo does not allow itself to be distracted by sales numbers. Once a new product hits the market, the company holds a post-mortem review session before any sales trends are known.

The idea is that one cannot create a product that is completely satisfactory as long as there is a deadline to meet. The meetings focus on releasing the next title that hits the satisfaction goals.

Even if a new idea turns out to be a flop on the business end, it can still lead to the next product, the thinking goes. Such an approach has given rise to several famous game creators.

Miyamoto is currently in charge of the development of the Super Nintendo World attraction due to open next month at Universal Studios Japan in Osaka. He is also overseeing the new Mario movie set for release next year.

But “for the past five or six years, I’ve felt that I wanted to use [Mario] in various media,” said Miyamoto.