That Whole Foods is an Amazon warehouse; get used to it 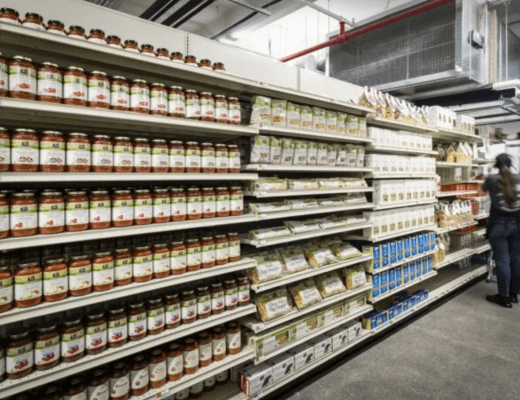 Earlier this week, in Brooklyn, near the waterfront, Amazon opened what looks from the outside like a typical Whole Foods store. It isn’t open to the public, however; it’s a new fulfillment center.

“Grocery delivery continues to be one of the fastest-growing businesses at Amazon,” the company said in a statement about the location, noting that it has hired hundreds of new employees to aid in its operations. “We’re thrilled to increase access to grocery delivery.”

Americans sort of knew this was coming. Still, the pace at which buildings of all sizes are being either built or converted into e-commerce fulfillment centers — and closer to city centers — has become a bit breathtaking. According to the commercial real estate services firm CBRE, since 2017 at least 59 projects in the U.S. have centered on converting 14 million square feet of retail space into 15.5 million square feet of industrial space, and that trend is “absolutely going to continue,” says Matthew Walaszek, an associate director of industrial and logistics research at CBRE.

It has played out fairly quietly to date, save for the occasional headline about, well, Amazon, typically. Last month, for example, the Wall Street Journal reported that the ever-expanding conglomerate is in talks with the largest mall owner in the U.S., Simon Property Group, about converting both former and current JCPenney and Sears stores into distribution hubs from which it can deliver its products more quickly.

Amazon needs the space. Meanwhile, Simon needs a tenant that can pay its bills. That’s a tall order right now for many brick-and-mortar retailers that were already under pressure and watched foot traffic disappear entirely with as the country largely shut down in March in response to the pandemic threat.

In fact, despite that Simon recently partnered with another outfit to buy retailers Brooks Brothers and Lucky Brand out of bankruptcy (Simon and fellow mall operator Brookfield are also reportedly in advanced talks to buy J.C. Penney), some view the moves as a means to buy time as it reconfigures its properties to accommodate one anchor tenant.

That exact scenario has already played out at Randall Park Mall in a Northeast Ohio suburb (a mall, incidentally, that this editor occasionally frequented as a teenager growing up in Cleveland). Once filled with gaudy stores like Piercing Pagoda and Spencer’s Gifts, the mall — among the world’s largest enclosed shopping centers when it opened in 1976 —  is now the site of an 855,000-square-foot facility filled with mobile robotic fulfillment systems.

A local outlet reported its conveyor belts would stretch farther than 10 miles if laid in a straight line.

It isn’t always Amazon that’s snapping up these properties, of course. There are a number of other large e-commerce players that are rapidly expanding their physical footprint right now, along with opportunistic developers betting the U.S. will also focus more on domestic manufacturing facilities in a post-COVID world.

There are also other big grocery chains that, like Amazon’s Whole Foods, are increasingly focused on developing fulfillment centers — sometimes right inside a store that sees foot traffic. At an Albertson’s in South San Francisco, for example, customers blithely shop around an automated rack-and-tote system at the store’s center that preps orders for pickup and delivery.

To a certain extent, this ongoing shift in use was inevitable. The U.S. has the strange distinction of featuring 24 square feet of retail space per capita. By comparison, Canada and Australia have 16.8 square feet and 11.2 square feet per capita, respectively. “We just have a lot of retail — we are over-retailed — so it’s not surprising that properties are struggling,” Walaszek says.

The pandemic has only poured figurative fuel on fire. Forbes estimates that upwards of 14,000 real-world retail stores will close in the U.S. this year. Meanwhile, during the first six months of the year, consumers spent $347.26 billion online with U.S. retailers, up 30.1% from $266.84 billion for the same period in 2019, according to U.S. Department of Commerce data parsed by the news and research outfit Digital Commerce.

That won’t change overnight, either. For one thing, retail-to-industrial conversions involve buy-in from local zoning officials whose constituents are often concerned about congestion, noise and pollution, among other things. Retail rents are also significantly higher than industrial rents — more than double in some markets — so it’s “a hard sell to a retail landlord to convert to industrial where revenues aren’t going to be as high,” notes Walaszek.

Still, thanks to a confluence of events — from a battering of the broader retail industry to the runaway growth of Amazon specifically –  both big and small fulfillment centers are beginning to spring up and fast.

As Amazon’s first “permanent online-only” Whole Foods in Brooklyn underscores, they may wind up in what seem like the unlikeliest of places, too.