OpenUnit aims to be Shopify for self-storage facilities 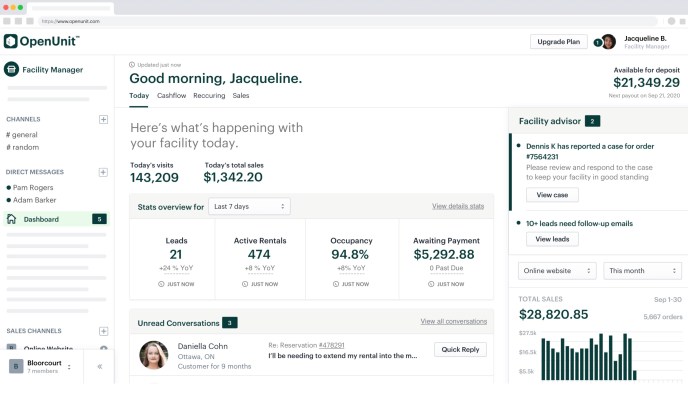 So you’re looking for a storage unit to put some stuff in for a few months. Maybe you’re moving and your new place isn’t ready yet – or maybe you’re just looking to declutter and want to tuck some stuff away for a while and see if you’re really ready to part with it.

As you may find, the process of finding a storage unit can be… not great. While there are a few big storage chains in the market, a huge chunk of the self storage industry is made up of independent/mom-and-pop shops that don’t necessarily have the time/budget to keep up as tech has evolved. It can involve a lot of poking around out-of-date websites, a lot of phone calls, and a lot of paperwork.

OpenUnit, a startup out of Toronto, wants to fix that. They’re aiming to be Shopify for the self-storage industry, with an all-in-one solution that provides a modern interface to help customers make reservations on the frontend, and gives facility managers everything they need to keep things running on the backend.

Co-founders Taylor Cooney and Lucas Playford found their way into self-storage when Taylor’s landlords came to him with an offer: they wanted to sell the place he was renting, and they’d give him a stack of cash if he could be out within just a few days. Pulling that off meant finding a place to keep all of his stuff while he looked for a new home, which is when he realized how antiquated the self-storage process could be.

The two initially set their sites on something a bit different: a Hotwire-style search system that would find deals on local storage units, negotiating the monthly cost on a customer’s behalf for a small one-time fee. The more they worked with facility managers, the more gaps they found in the tools and systems on the market, so they shifted focus to this facility management suite.

OpenUnit was part of the Winter 2020 Y Combinator class which ended back in March, but the team opted to defer their demo day debut until YC’s Summer 2020 event next week. As March came to an end and the severity of the pandemic was becoming more clear, Canadian Prime Minister Justin Trudeau called upon any citizens abroad to return home sooner than later. Launching a company while rushing to get back home is hardly ideal, so the two chose to hold off their launch until now.

After a few weeks of private testing, OpenUnit is now starting to bring more storage facilities on board. Run a storage company and want to give it a look? They’ve got a waiting list here.