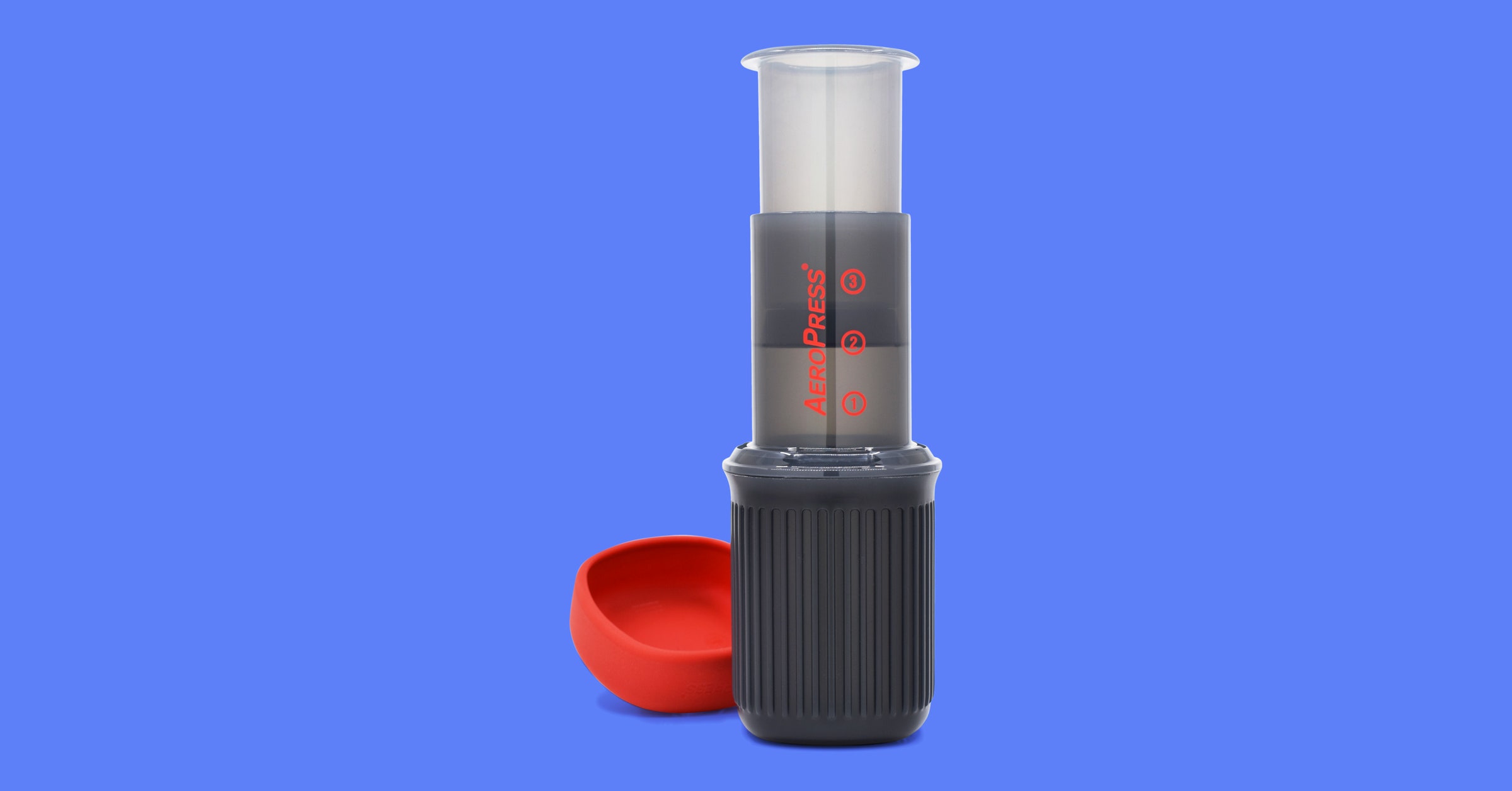 I came into one of my favorite new ways to make coffee by accident. My friend Trevor got two AeroPress coffee makers for his birthday last summer and sent me home with one, an act of generosity I appreciate every morning when I turn on the kettle.

Many people might confuse the AeroPress for Austin Powers’ favorite Swedish sex device1. It’s a syringe-like setup where you put grounds into one cylinder and use the other as a plunger, pressing hot water through the grounds and a filter, down into your mug. When you’re done, you eject the puck of grounds into the compost bin. The coffee it creates is somewhere between espresso and a really strong cuppa joe. You can drink it as is, or add hot water to make an Americano. Some folks even use the shot it pours as the base of a latte or other espresso drinks.

A bit of an outlier in coffee maker-dom, the AeroPress is a bit like a pour-over setup or a tiny French press, and every time I use it, I marvel at its cleverness. Now a travel version has improved on the original, so much so that I think it may replace it and become the gift of the year for coffee lovers in the process.

The AeroPress Go is a minimally miniaturized version of the original. (Mr. Powers will still love it.) It’s an inch shorter and a whisker narrower, meaning it brews slightly less coffee—eight ounces instead of 10. The big difference here is that all of the parts now tuck neatly into a gray plastic mug with a rubbery, red silicone lid. Inside there’s a tiny spoon, a foldable stirrer to swish the grounds around, and a squat makeup-compact style case that holds the filters. Sealed up, the mug and lid look like a cousin of the mushrooms from Mario Bros.

Eager to give the Go a go, I stocked up on coffee and got brewing. I quickly found that if you already own an AeroPress—the company now refers to the first model as the “original”—there’s almost no learning curve. You’ll make excellent coffee right off the bat.

I got my hands on a Go review unit before its official street date and brought it over to show my friends at Seattle’s Empire Espresso. Along with their excellent espresso drinks, Empire specializes in AeroPress coffee, and every barista behind the counter craned their necks for a look when I pulled it out of my bag. Shop owner Ian Peters explained that they had dabbled in both the pour-over and Chemex (big pour-over) methods, but being a busy coffee shop, they struggled with the time constraints these labor-intensive methods require. They can’t afford to rely on techniques that monopolize a staff member for a good five minutes while the line backs out the door.

“Pour-over used to be a real problem,” Peters said. He found the quality of the AeroPress coffee much like those methods, and it took half the time. “The profile was so similar to a pour-over that I couldn’t tell the difference.”

Peters picked up the Go and set up a head-to-head taste test between it and one of his original AeroPresses. Both coffees were excellent, with minimal differences between them. I did detect a bit more acidity a bit earlier in the sip from the Go cup and asked Peters about it.

“I’d tweak the ratio a bit, but it wouldn’t be hard,” he said, referring to the amount of grounds and hot water, before cocking his head and smiling, as if marveling at the new gadget. “My wife makes an AeroPress coffee every morning. She’s going to want one of these.”

There are two ways you can brew with an AeroPress. In the “classic” method, you weigh out your beans, grind them, pour them into the larger of the two cylinders (the brewing chamber), add hot water, stir, and plunge. The coffee starts dripping into your mug as soon as the water hits the filter, a slight imperfection in the design that begat the “inverted” method. For that technique, you push the plunger about a centimeter into the brewing chamber, turn the whole thing upside down, pour the grounds and water right onto the plunger, and stir. After that, you put on the filter cap, flip, and plunge. Coffee nerds love inverting because there’s no drip-through and the steeping time is more easily controlled.

Food writer Joe Ray (@joe_diner) is a Lowell Thomas Travel Journalist of the Year, a restaurant critic, and author of Sea and Smoke with chef Blaine Wetzel.

Normal or flipped, it’s a setup that allows you to find a favorite brewing method and lock it in forever. I’m partial to a number-six grind on my Baratza Encore grinder, 22 grams of beans, and enough water to fill to the #3 marker on the side of the Go (about 75 grams), then plunging and adding hot water and milk to my mug. You can tinker to your heart’s content.

One thing I noticed in the AeroPress materials is how they highlight a water temperature preference of 175 degrees Fahrenheit (80 degrees Celsius), which is notably cooler than the just-boiled water from my kettle. So, I bought a kettle with six presets and paid particular attention to the effects of water temperature. Trying this out is part of coffee testing’s scientific method, but the insistence on 175 degrees also read like marketing hokum.

I immediately knew I was wrong in my first head-to head. With all other variables locked down, I made a cup with 175-degree water and another with water right off a 212-degree boil. Both made good coffee, but after smelling the 175-degree cup, I noticed it lacked the smoky/burnt/caramelized aromas that stuck out clearly in the 212-degree cup. Whether you enjoy those smells probably depends on how much you like burnt marshmallows.

The bigger difference was in the sipping. Again, both cups were good, but the 175-degree cup reminded me of high-end coffee-shop coffee, while the 212-degree cup had rougher edges and sharper flavors. I had been brewing with a medium-dark roast, so next I experimented with an oily dark roast. I found similar but less-pronounced results. Still, it was good enough to convince me to brew at a lower temperature in the future.

If you do tinker—give it a try!—just remember to tweak only one variable at a time and use coffee that you know you like. As long as you’re in the ballpark, it’s hard to go wrong, but Jessica Easto’s Craft Coffee is excellent if you’re looking for a primer on brewing methods.

Regardless of method, the Go is superior to its already excellent predecessor. First, it’s made to travel. People like to talk about traveling with the original, and there’s an accessory bag you can get to do that, but the Go’s cup and lid make it much more compact, and less clunky too. Fly into a new town for a week, grab a bag of ground beans when you land, and your home kit is now your road kit.

Second, between the mug and the lid, you’ve got places to set things down as you work. The best thing I’d figured out with my original was to put a loaf pan next to my kettle, creating a little accessory bin so I didn’t have to set a wet, grounds-covered stirrer or slightly drippy brewer on the counter. It’s not perfect, but it’s better with the Go. Third, packed into its cup with the lid on, it looks much nicer on a kitchen shelf. Fourth, they both cost around $30.

My nitpicks with the Go are few. The stirring paddle it comes with cleverly folds down to fit inside the plunger, but it’s not as effective as the one that comes with the original. The silicone lid that holds everything in place inside the mug leaves the closed assembly a bit wobbly, and it’d be nice if it snapped firmly into place. I’d love to see some sort of optional “dock” to keep you from setting things down on the counter before (and especially after) you brew. It’s also all plastic, and it’d be lovely to see a fancy version made of more Earth-friendly materials. Finally, I’d be takers on a big version that could make several cups at once.

I did wonder out loud to the AeroPress marketing coordinator if we might see some sort of retrofitting capability for the original so it had a cup and lid it could pack into—they could call it the Go Big!—but she could only be coaxed into saying that there are “more products in the pipeline.”

1 An earlier version of this story referred to Austin Powers’ Swedish-made penis enlarger pump as a sex toy. It is in fact a sex device. We’ve corrected this error.