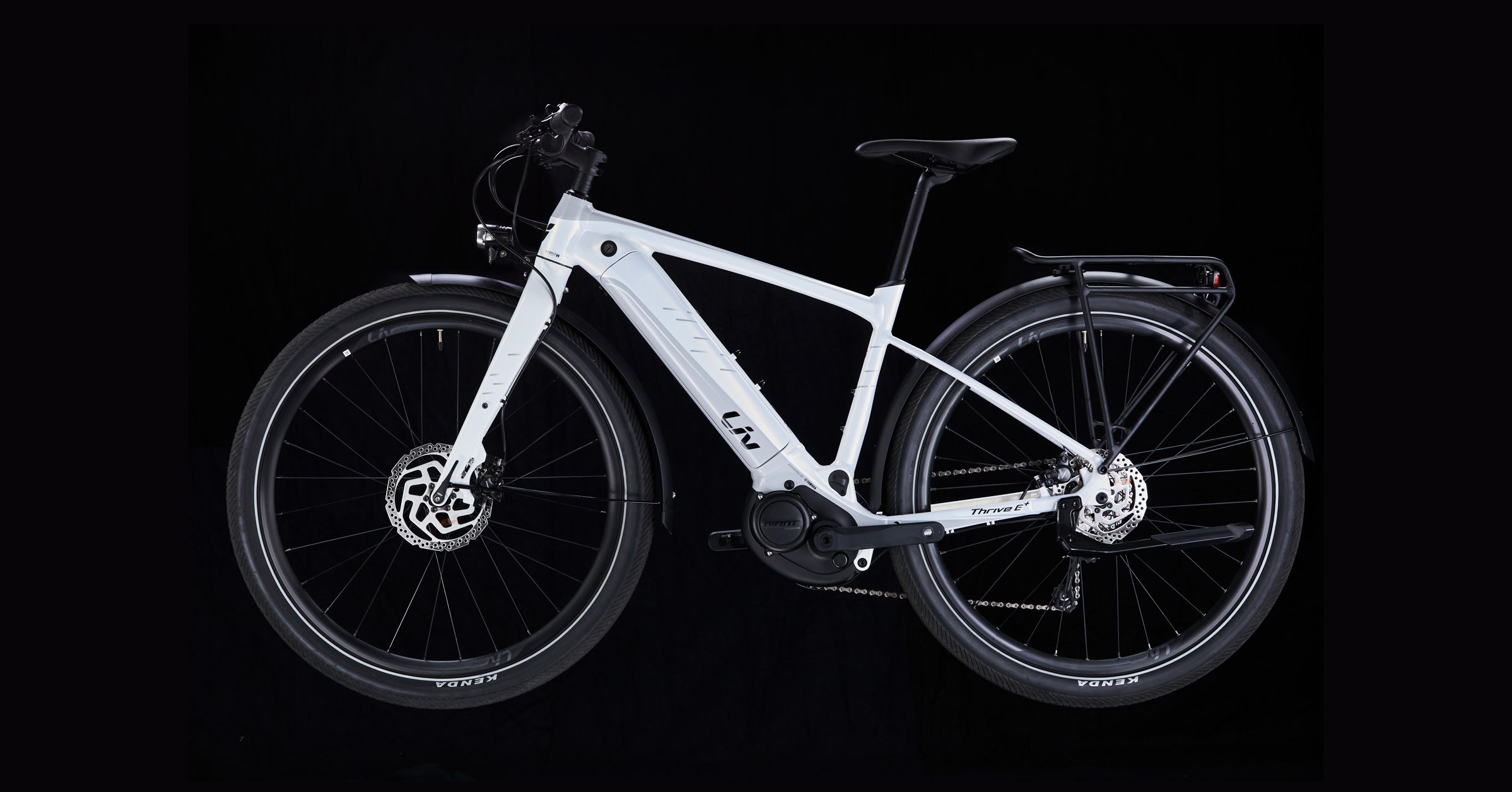 This headline caught my attention as I was scanning the morning news: “Liv Cycling Introduces New E-Bike Built for Women.” Women-specific bike designs have been around since 2002, but an e-bike specifically built for women? That sounded intriguing.

Would the motor on Liv’s new Thrive E+ EX Pro have more horsepower or less? Would its torque, speed, cadence, and acceleration be different than a men’s bike? Would it have a lighter battery to compensate for a distaff rider?

Further research divulged that “e-bike built for women” is a partial truth. While the frame design and pieces like the saddle and handlebars are specific to a female rider, the Thrive E+ EX Pro uses the same e-components as the unisex bikes made by Giant, Liv’s corporate parent: the same 36-volt lithium-ion battery; the same RideControl EVO Display; and the same Yamaha motor with five pedal-assistance modes, from Eco to Power, that delivers up to 110 rpms in the highest setting. The Yamaha motor does, however, have a technology called “Pedal Plus Sensor” that translates six real-time measurements—torque, speed, cadence, motor rotation, slope detection, and accelerometer data—that adds just the right of power at just the right time, whether the rider is male or female.

But the photo of this alloy commuter bike—with its elegant white frame and matching Kenda tires with a reflective whitewall strip—made me want to take the bike for a spin.

The technology translated to a smooth, quiet ride on paved bike paths, up potholed streets, and even on a gravel roads. I shifted through the bike’s 10 gears and selected each of the five e-support modes. I charged around town at speeds up to 25 mph (three mph below all e-bike’s maximum assisted speed allowance), immensely enjoying the smooth and intuitive ride. It was surprisingly effortless to climb hills too, even in the lowest e-support modes.

The bike’s RideControl “command center” displays relevant stats like support mode, speed, distance, and battery level on an LCD screen that’s mounted in the center of the handlebars. It’s easy to read, even without my cheater glasses. For those who want to geek out on stats, Liv also offers a companion Bluetooth-enabled RideControl App.

No e-bike battery lasts forever, but I was a little surprised at how quickly I burned through juice. Liv claims a fully-charged battery can last up to 72.6 miles before needing a boost. I left my house with the battery at 83 percent and returned home 45 minutes and 11 miles later with 39 percent left. The terrain I rode was hilly, and so I flipped between all the support modes, stopping along the way to take notes and fiddle with bike parts, like a saddle that kept lowering because I apparently failed to turn the hex key hard enough out of fear of stripping the bolt. At the rate I was going, I would have burned through a full battery in just over two hours, which isn’t too far from the standard for most e-bikes. But most e-bikes are heavy and this one is no exception, so I wanted to err on the side of not having to manually pedal it home.

Ahead of the Pack

So what does make the E+ Ex Pro women-specific? After years of research and experimentation with women-specific frames, most major manufacturers like Specialized and Trek returned years ago to making gender-neutral frames in multiple sizes. The gender-specific part of bicycle design usually involves customizing the touch points, or the parts of the bike where there is a large anatomical difference, like the saddle.

“Our data suggest that a lot of times there’s a greater difference between two male riders than between a male and a female,” says Kelly Henningsen, global public relations manager for the bike manufacturer Specialized. “We invest our dollars not in making separate bikes but in ways that will support women and make them more comfortable, like saddles and chamois.”

Eric Bjorling, the director of brand marketing for Trek Bikes, says his team has not seen any significant performance differences between men and women. “Our research has shown that power needs are a really personal thing that varies greatly between what riders need and want,” says Bjorling. “The best way to give them the best experience is to let them decide what works for them.”

Liv, the only comprehensive cycling brand in the world dedicated to women, maintains that women still need a gender-specific frame. Using data from PeopleSize, a global database of people’s body measurements, plus research from NASA that provides data points about women’s anatomy, sizing variations, and muscle energy and outputs, Liv posits that women on average have narrower shoulders, shorter arms, and shorter inseam heights than men. This means that women aren’t as likely to find a good fit on a smaller bike frame built for men, because women will be too bent over and too stretched out. A misfit frame may result in lower-back pain, neck pain, elbow pain, and hand numbing.

Liv’s research also found that women’s muscle activity reveals distinctive patterns. For example, women activate the rectus femoris (a quad muscle in the thigh) more than men when riding. They also have a higher lower-body to upper-body strength ratio than men. To accommodate for these differences, Liv creates a steeper seat-tube angle on its bikes, which allows women to leverage their rectus femoris. The company also varies the stiffness of its bikes to compensate for women’s powerful pedal strokes.

How did these gender-specific frame tweaks translate to the Thrive E+ EX Pro? As a 5′ 9″ woman who does not ride a women-specific frame, the medium frame felt more compact than what I’m used to, despite the seat tube and top tube lengths were in the ballpark of the lengths I normally ride. In fact, everything felt more diminutive, from the handlebar width to the stem length to the handlebar grips—all of which is a bonus if you happen to be a petite rider.

After decades of riding road, gravel, mountain, and e-bikes, I’ve come to realize that the most important takeaway for women is this: The argument over the need for gender-specific bike designs will exist as long as there are bikes. And while it would be nice if a new bike were to fit like a glove right out of the box, it rarely happens, no matter what the frame’s intended gender. The good news is that there are as many adjustments one can make—from stem length to saddle preference to minuscule cleat tweaks—as there are types and shapes of riders. Think of it this way: A bike is almost as important as a life mate, so choose wisely.