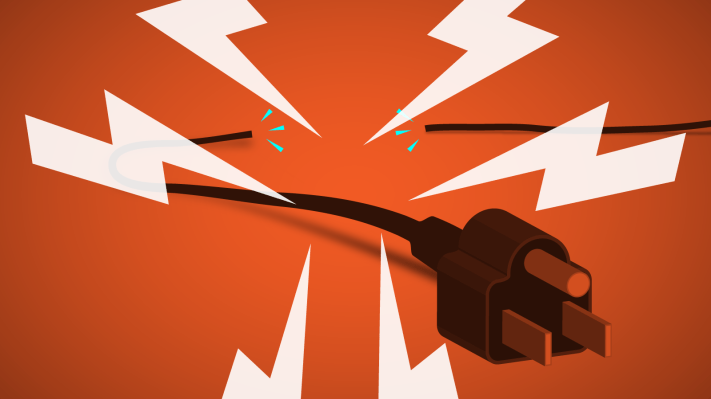 Eaves’ first company, the eponymous Eaves Devices focused on energy systems in aerospace and defense — they converted the military’s fleet of B2 bombers to use lithium ion batteries.

The second company he was involved in was developing modular array devices to install in central offices and cell towers and conducted early work on electric vehicle development.

His goal, Eaves says, was to “make electricity inherently safe”.

VoltServer is the latest company from Eaves to pursue that goal. Eaves makes transmission safer by breaking electrical distribution into packets and those packets are sent down transmission lines to ensure that are not faults. If there’s a break in the line, the equipment stops transmitting energy.

The architecture is akin to a router. There’s digital signal processing in the transmitter powered by a semiconductor that’s a gateway for the electricity. “It’s like the devices you find in solar power converters,” says Eaves.

Already roughly 700 stadiums, large offices, and indoor grow facilities have deployed the company’s technology. And the traction was enough to attract the attention of Alphabet subsidiary, Sidewalk Labs, which led a recent $7.4 million financing into the company. To date, the company has raised $18 million from a clutch of investors including: Marker Hill Capital, Slater Technology Fund, Natural Resources Capital Management, Clean Energy Venture Group, Angel Street Capital and Coniston Capital.

“We’re kind of a combined hardware and software company,” says Eaves. “[Customers] buy the boxes and the company has third parties that install it.. There are software applications to track energy usage to assign processes for what to do in an outage.”

Typical installations can be anywhere from $30,000 to $1 million and the company is targeting three core markets — intelligent building infrastructure, communications, and indoor agriculture, according to Eaves. In fact, the company’s largest installation is a lettuce farm in Florida. “You’re in a very constrained environment and you want a very safe transmission technology. And we’ve developed a lighting product. It removes a lot of the conversion electronics that would normally be in the growth space,” says Eaves.

The technology certainly slashes the cost for power transmission in a stadium. Traditional power transmission can cost roughly $36 per linear foot, while VoltServer can cut that cost to less than $10 per foot, according to the company.

VoltServer isn’t the only startup that’s looking to add data controls to electricity distribution. Companies like Blueprint Power, Blue Pillar, and monitoring companies like Enertiv and Aquicore are all looking at ways to monitor and manage distribution. At the grid scale, there’s Camus Energy which looks to provide energy “orchestration” services.

“Electricity powers our world, but the fundamental danger inherent in AC or DC electricity makes today’s electrical systems expensive to install or change,” said Sidewalk Labs chairman and chief executive, Dan Doctoroff in a statement. “[This technology] is a breakthrough, offering a less expensive, safer and more efficient way to distribute electricity that can make buildings more affordable and flexible.  Over time, that can make cities more affordable, sustainable, and adaptable as our needs change.”

For some investors in the energy sector, these kinds of distribution and transmission technologies are a critical component of the next generation of grid technologies needed to bring the world closer to 100% renewable transmission.

“What is relevant is internet-connected, controllable energy assets that you can control from some centralized dispatch,” says one investor active in energy investing.