Apple in September announced its plans for a research app that would allow U.S. consumers to participate in health studies from their Apple devices. Today, that app has gone live for both iPhone and Apple Watch for customers in the U.S. From the new app, Apple Research, users can currently opt to participate in three health studies, including a women’s health study, hearing study, and a heart and movement study.

Apple had teamed up with researchers and health organizations on previous studies, but those would require participants to install a dedicated app on their iOS device for each study alone. The new Research app instead offers a dedicated place for this opt-in activity and makes it simpler for people who want to join multiple studies at once. 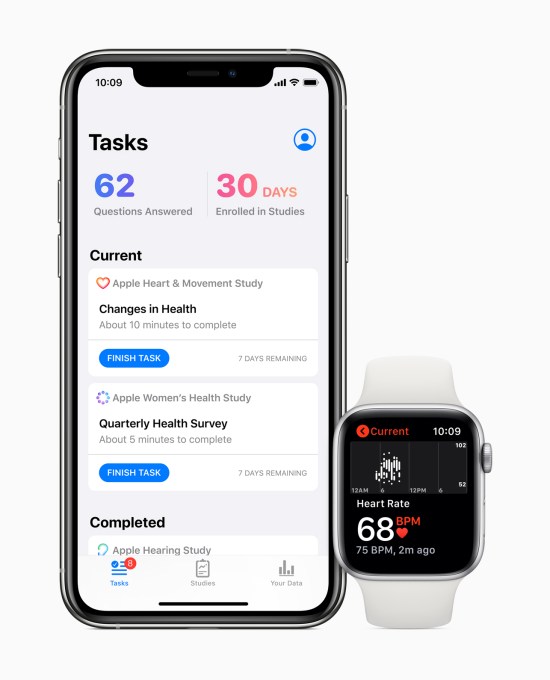 The data collected from Apple devices (and their numerous sensors) offers researchers the ability to conduct large-scale health studies in a way that hasn’t been possible before. Before, these sorts of studies were expensive and time-consuming, Apple says, but now users can opt into sharing health-related information directly with researchers — like signals from their heart, motion level and activity, and sound exposure.

Apple’s privacy promises come into play here as well, as it puts data-sharing in users’ control, and offers commitments that data will be encrypted, won’t be sold, and that studies have to inform users how your data will support their research. Participants can also withdraw at any time.

Among the first three studies is a women’s health study in partnership with the Harvard T.H. Chan School of Public Health and National Institute of Environmental Health Sciences. It aims to advance understanding of women’s menstrual cycles and their relationship to infertility, osteoporosis, menopause, and polycystic ovary syndrome (PCOS). This will collect users’ cycle tracking logs from the Health app on the iPhone or the Cycle Tracking app on Apple Watch. 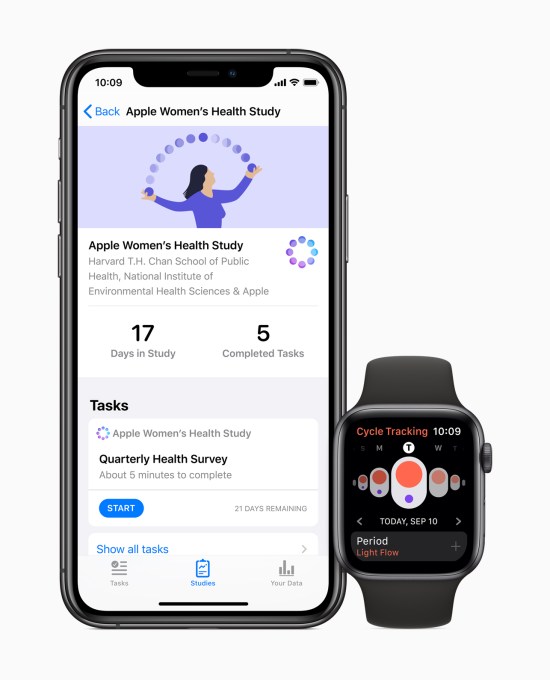 Another heart and movement study is in partnership with the American Heart Association and Brigham and Women’s Hospital, and will use Apple Watch data collected during workouts, plus heart rate and activity data, along with short surveys. This data will be used to understand how certain mobility signals and details about heart rate and rhythm could serve as potential early warning signs of atrial fibrillation (AFib), heart disease or declining mobility, among other things. 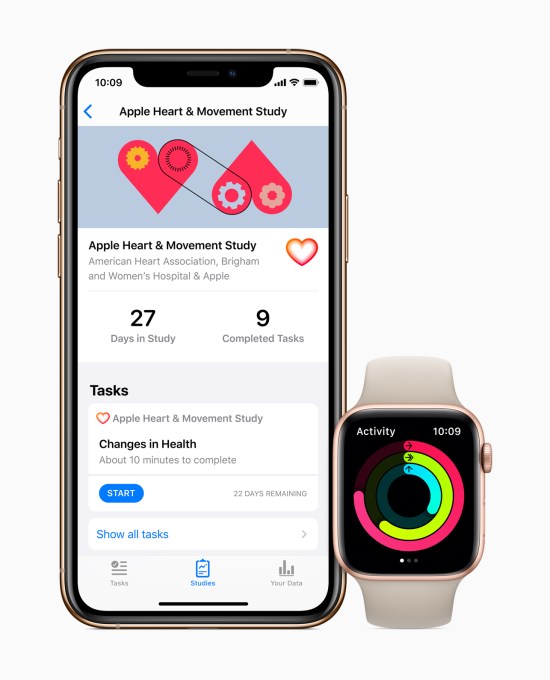 The hearing study from the University of Michigan and the World Health Organization collects data about users’ sound exposure from the iPhone and Noise app on Apple Watch, along with surveys and hearing tests. The study will also test if Health app notifications will encourage users to modify their listening behavior, when loud sounds are detected.

“Today marks an important moment as we embark on research initiatives that may offer incredible learnings in areas long sought after by the medical community,” said Jeff Williams, Apple’s chief operating officer, in a statement about the app’s launch. “Participants on the Research app have the opportunity to make a tremendous impact that could lead to new discoveries and help millions lead healthier lives.”

The Research app is rolling out now to iPhone and Apple Watch in the U.S.