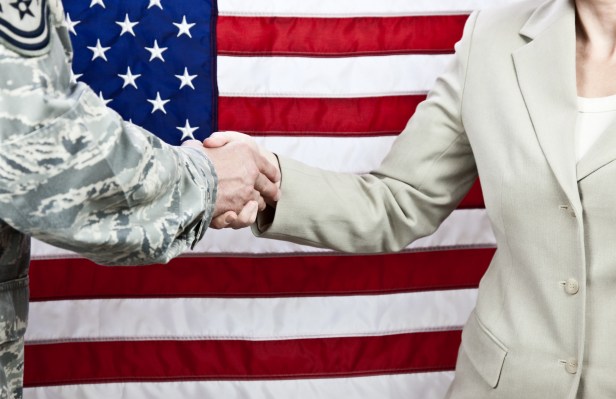 While across much of Asia, November 11th is either “singles day” (a $38 billion Alibaba extravaganza this year) or Pepero Day (named because 11/11 looks like a bunch of chocolate dessert sticks), here in the United States and parts of Europe, November 11th also marks the end of World War I and the commemoration of Veterans Day.

Every year in the U.S., tens of thousands of soldiers leave active duty and transition into the civilian workforce, a route that can be startlingly difficult to navigate. How do you describe what an ordnance specialist does to civilians who have no idea what an MOS is? While the military teaches skills useful to a wide number of professions, holding the right conversations in a job search is key to making the leap.

That’s why a spate of new programs aims to help make it easier for veterans to head into the civilian workforce, and particularly into tech, which obviously has huge growth and great jobs waiting for those who can lock them up. I’ve previously covered one TechStars-connected non-profit, Patriot Boot Camp, which helps veterans looking to launch startups navigate the founder route.

One company that we haven’t covered on TechCrunch before though is Shift.org, an a16z-backed for-profit startup that aims to help veterans learn the key career skills needed to “shift” from the military into the civilian workforce.

Today for Veterans Day, the company announced a new employer partnership with mortgage fintech startup Better.com that will see Better.com hire 80 veterans in the next few months using Shift.org as a sourcing pool, with a projected hiring target of 5,000 veterans and their spouses by 2025 (assuming, as with all high-growth startups, that the high-growth continues firing on all cylinders).

In a press statement, Better.com CEO Vishal Garg said that “Veterans are an untapped source of talent that learned, operated and adapted to some of the world’s most innovative technologies from VR to robotics, nuclear technology and cyber.”

I chatted a bit with Shift.org CEO Mike Slagh about how he sees these partnerships and his own path into building a company. “I got started three years ago after serving in the Navy for just over five years as a bomb disposal officer,” he explained. In many ways, Shift.org was trying to fix his own challenge in moving back into the civilian workforce:

… My story was, I was going on base to the career fairs — there are these big aircraft hangers — and you’re sitting across the table from these employers, and they’re telling you what it’s like to work at their company, they’re telling you what [their] culture is like, and it’s just really hard to picture and it’s such an anxiety-ridden decision, and a big high-stakes moment in your life where you want to get it right for your family, you want to get it right for your future career trajectory.

Part of that anxiety is that saying the right things is often more crucial in recruitment settings than having the right skills. Slagh said that “I actually think that the gap is much narrower than many people naturally assume,” but, “you have to oftentimes have industry-specific context for somebody to take a bet on you when you have a non-traditional background.”

Since launching, Shift.org has partnered with employers like Better.com, Major League Baseball, and Symantec to help bridge the divide and open the pipeline to a wider and more diverse set of candidates.

The company was first funded by Garrett Camp of Expa Labs, and netted a reported $4 million round from Jeff Jordan at Andreessen Horowitz early last year. Slagh said his hope is to eventually work with hundreds of thousands of veterans not just secure great jobs, but also to train them in the skillsets they need to succeed in the future. The company is exclusively partnered today with Lambda School to help provide some of that technical background, for instance.