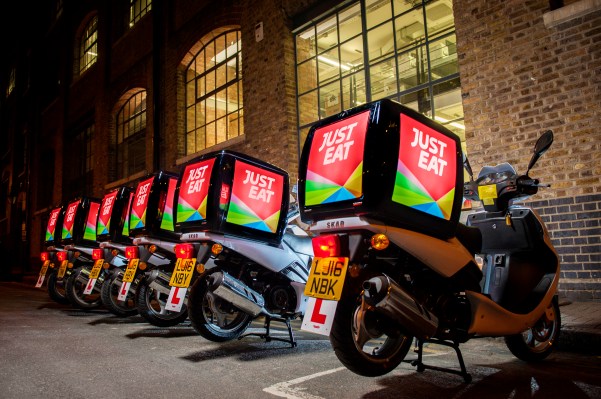 As Amazon-backed Deliveroo expands into click-and-collect and procurement services to grow its footprint with restaurants in Europe, a food fight among three other takeout and delivery players continues apace in an ongoing consolidation march to compete better against the likes not just of Deliveroo but also Uber Eats and more.

Today, Prosus — the recently-listed arm of Naspers comprising its extensive online assets (including a significant stake in Tencent) — said that it would be willing to pay £4.9 billion ($6.3 billion) in cash for Just Eat, one of the big players in the food takeout and delivery market in Europe. The bid is a hostile one: Just Eat has been in the middle of working on a combination with Takeaway.com, another large competitor in the market; and today Just Eat wasted no time in asking its shareholders to reject the Prosus offer.

“The Board believes that Just Eat is a leading strategic asset in the food delivery sector and the Prosus Offer fails to appropriately reflect the quality of Just Eat and its attractive assets and prospects, the benefits of first mover advantage in a consolidating sector, and the significant future upside available to Just Eat shareholders through remaining invested in Just Eat and the Takeaway.com Combination,” it noted in a statement. “The Board of Just Eat believes that the Takeaway.com Combination is based on a compelling strategic rationale that will deliver a number of strategic benefits and greater value creation to Just Eat shareholders than the terms of the Prosus Offer. Accordingly, the Board of Just Eat continues to unanimously recommend the Takeaway.com Combination to Just Eat shareholders.”

Prosus’ offer, which works out to 710 pence per Just Eat Share, is 20% higher than Takeaway.com’s offer of 594 pence (which itself was at a premium to Just Eat’s share price).

The Takeaway offer has been months in the making and has had a number of twists and turns. The first announcement for a $10 billion merger was made in July, but in the interim Prosus made its first hostile offer, and so the deal switched to a takeover this month in hopes of securing shareholder agreement faster.

At stake for all players is the fact that the delivery business continues to be a fast-growing but very crowded field, with a number of players operating unprofitably and hoping for consolidation in order to improve their economies of scale and margins. If economies of scale and better margins is the rock, the competition is the hard place: all three have a strong and very highly capitalised set of a pair of competitors in the form of Uber Eats and Amazon-backed Deliveroo, with a number of smaller but also fast growing startups continuing to crowd the field.

Just Eat and Takeaway.com have already done some consolidating of other operations. The latter two have gobbled up different parts of DeliveryHero’s European business in recent times. Prosus, meanwhile, has a 22% stake in the remaining DeliveryHero business (outside of Europe), alongside stakes in India’s Swiggy and iFood in Latin America. This would mean that Prosus taking over Just Eat would be less about consolidation of European holdings, which could be one reason why Just Eat is less keen on the idea.

Takeaway.com has also issued a response to the news, noting that it’s the only one of the three that has working on building profitability into the business: it’s currently profitable in the Netherlands, its home market, and is on track to getting there in Germany (a track it believes it can continue with more scale).

“Given the circumstances, I can fully understand that the current cash values of both our and the competing offer aren’t particularly appealing to the Just Eat shareholders, and seem to be quite far removed from the fair value of Just Eat. We do however believe that the agreed merger ratio between Just Eat and Takeaway.com is appropriate,” noted Jitse Groen, CEO of Takeaway.com, in a statement. “Takeaway.com now operates in two out of the world’s four major profit pools. Including the UK, the Just Eat Takeaway.com combination will therefore operate in three out of the four major profit pools globally available. This in stark contrast with most other food delivery websites, which are loss-making, and in our opinion, will likely never become profitable.”

It seems that Naspers’ Prosus says that this is its last and final offer for Just Eat, but this is unlikely to be the final word on how food delivery and takeout will play out in Europe (or globally).

The market is still largely operating in the red globally — and even the most established players, like GrubHub, are not seeing much stability. And with about half a dozen giant players operating in different markets, and lots of capital riding on each of them, we’ll be seeing a number of deals and product expansions — for example the emergence of more “virtual” kitchens other added services such as restaurant procurement — before it’s all gravy for this industry.