More women in India die from cervical cancer than in any other country. This preventable disease kills around 67,000 women in India every year, more than 25% of the 260,000 deaths worldwide.

Effective screening and early detection can help reduce its incidence, but part of the challenge — and there are several parts — today is that the testing process to detect the onset of the disease is unbearably time-consuming.

This is because the existing methodology that cytopathologists use is time consuming to begin with, but also because there are very few of them in the nation. Could AI speed this up?

At SRL Diagnostics, the largest chain to offer diagnostic services in pathology and radiology in India, we are getting an early look of this. Last year, Microsoft partnered with SRL Diagnostics to co-create an AI Network for Pathology to ease the burden of cytopathologists and histopathologists.

SRL Diagnostics receives more than 100,000 Pap smear samples every year. About 98% of these samples are typically normal and only the remaining 2% samples require intervention. “We were looking for ways to ensure our cytopathologists were able to find those 2% abnormal samples faster,” explained Dr. Arnab Roy, Technical Lead for New Initiatives & Knowledge Management at SRL Diagnostics. 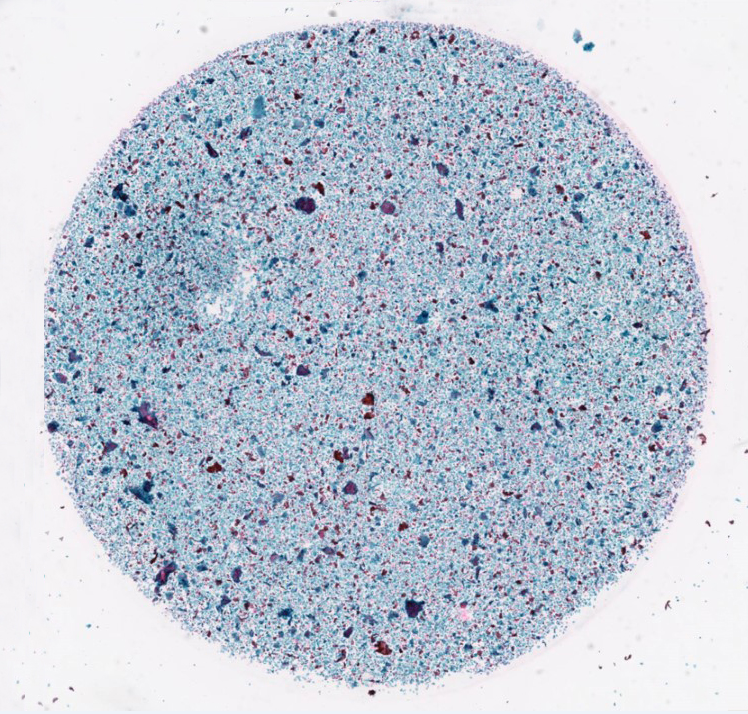 A digitally scanned version of a Whole Slide Imaging (WSI) slide, which is used to train the AI model

Then there was the challenge of subjectivity. “Different cytopathologists examine different elements in a smear slide in a unique manner even if the overall diagnosis is the same. This is the subjectivity element in the whole process, which many a time is linked to the experience of the expert,” reveals Dr. Roy.

Manish Gupta, Principal Applied Researcher at Microsoft Azure Global Engineering, who worked closely with the team at SRL Diagnostics, said the idea was to create an AI algorithm that could identify areas that everybody was looking at and “create a consensus on the areas assessed.”

Cytopathologists across multiple labs and locations annotated thousands of tile images of cervical smear. They created discordant and concordant notes on each sample image.

“The images for which annotations were found to be discordant — that is if they were viewed differently by three team members — were sent to senior cytopathologists for final analysis,” Microsoft wrote in a blog post.

This week, the two revealed that their collaboration has started to show results. SRL Diagnostics has started an internal preview to use Cervical Cancer Image Detection API. The Cervical Cancer Image Detection API, which runs on Microsoft’s Azure, can quickly screen liquid-based cytology slide images for detection of cervical cancer in the early stages and return insights to pathologists in labs, the two said.

The AI model can now differentiate between normal and abnormal smear slides with accuracy and is currently under validation in labs for a period of three to six months. It can also classify smear slides based on the seven-subtypes of cervical cytopathological scale, the two wrote in a blog post.

During the internal preview period, the exercise will use more than half-a-million anonymized digital tile images. Following internal validation, the API will be previewed in external cervical cancer diagnostic workflows, including hospitals and other diagnostic centers.

“Cytopathologists now have to review fewer areas, 20 as of now, on a whole slide liquid-based cytology image and validate the positive cases thus bringing in greater efficiency and speeding up the initial screening process,” Microsoft wrote.

“The API has the potential of increasing the productivity of a cytopathology section by about four times. In a future scenario of automated slide preparation with assistance from AI, cytopathologists can do a job in two hours what would earlier take about eight hours!” Dr. Roy said.

SRL Diagnostics-Microsoft consortium said they are hopeful their APIs could find application in other fields of pathology such as diagnosis of kidney pathologies and in oral, pancreatic and liver cancers. The consortium also aims to expand its reach with tie-ups with private players and governments and expand the reach of the model even in remote geographies where the availability of histopathologists is a challenge.

The announcement this week is the latest example of Microsoft’s ongoing research work in India. The world’s second most populous nation has become a test bed for many American technology companies to build new products and services that solve local challenges as they look for their next billion users worldwide.

Last week, Microsoft announced its AI project was helping improve the way driving tests are conducted in India. The company has unveiled a score of tools for the Indian market in the last two years. Microsoft has previously developed tools to help farmers in India increase their crop yields and worked with hospitals to prevent avoidable blindness. Last year, the company partnered with Apollo Hospitals to create an AI-powered API customized to predict risk of heart diseases in India.