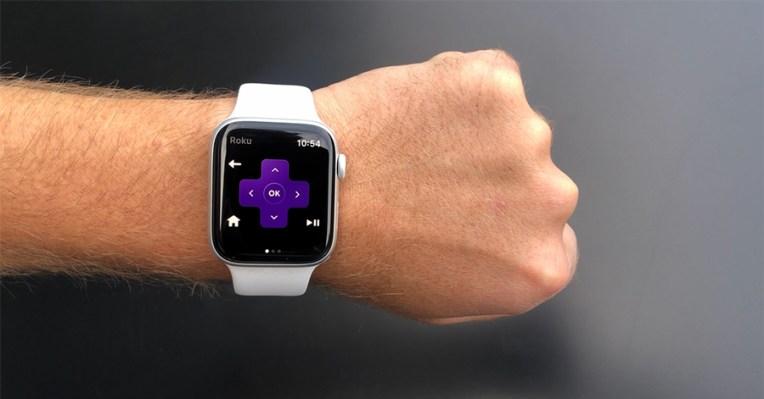 The Roku remote is coming to your wrist. The company announced today the launch of an Apple Watch app that lets you control your Roku device, including Roku media players and select Roku TVs, with a tap — just like the Roku mobile app, but sized for your wrist.

Considered the limited screen real estate, the app is fairly robust in terms of its feature set.

In addition to the expected media controls — like the ability to play and pause what you’re watching –, the app also offers a home button, the select button (“OK”), a back button and directional arrows. And it includes a way to launch your favorite channels, which are organized in order of the most recently launched to make them easier to access. That way, if you always watch Netflix, you don’t have to scroll down to find it.

In addition, the tiny remote app includes voice search functionality. To activate, you just tap the voice icon, then say things like “Launch Hulu” or “search for comedies,” or even change sources, like “switch to HDMI 1” for your Roku TV, the company explains. This will work on Apple Watch versions 1 through 5.

And if you have a Roku Ultra or a Roku TV with the Remote Finder functionality which uses an audible chime to locate a lost remote control in the couch cushions, you can also use the Roku Apple Watch app to signal your Roku remote to start making a noise.

All these features will be familiar to anyone who has already used the Roku remote for smartphones, as the Apple Watch app is just a miniaturized version. The only thing it’s missing is the ability to stream The Roku Channels’ free movies, but obviously that’s not a feature you’ll want on your wristwatch. (I mean…right?)

To get the Roku Apple Watch app, you’ll need to download or update your Roku iOS app to the latest version (6.1.3), and the app will appear on your Watch as long as you haven’t disabled “Automatic App Install” in the Watch’s Settings.