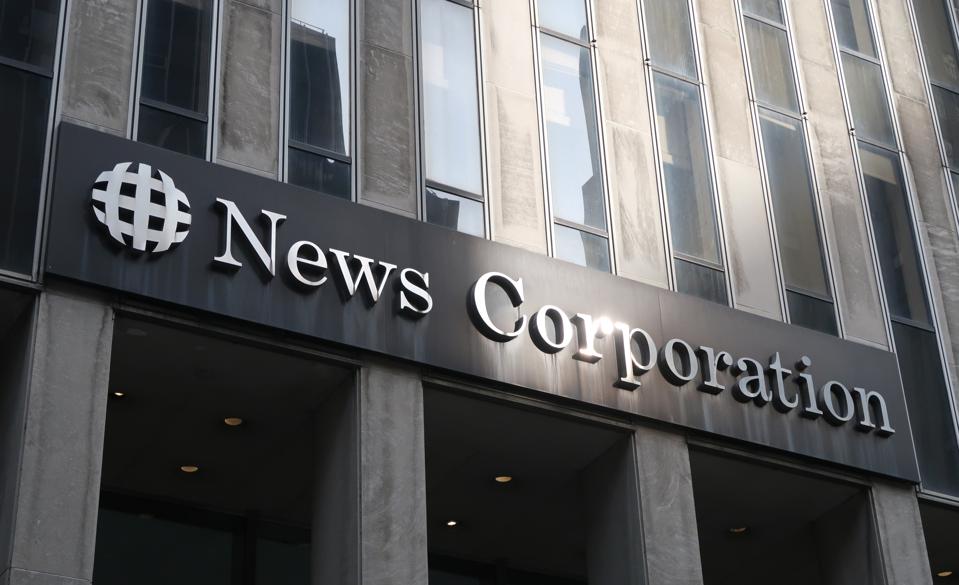 NEW YORK, NY – MAY 11: The sun reflects off the corporate logo of News Corporation at their … [+] headquarters on 6th Avenue on May 11, 2019 in New York City. (Photo by Gary Hershorn/Getty Images)

News Corp. Rupert Murdoch’s publishing empire reported a surprise quarterly loss as gains at its Dow Jones business, which includes The Wall Street Journal, couldn’t offset the declines across its other divisions,

The net loss for the quarter was $211 million, or 39 cents per share, compared with net income of $128 million, or 17 cents, a year earlier. Revenue at the New York-based company fell 7 percent to $2.34 billion. Excluding one-time items, per-share profit was 4 cents. On that basis, New York-based News Corp was expected to earn 5 cents on sales of $2.4 billion.

Going forward, News Corp expects to benefit from its inclusion in Facebook’s News tab that is designed to highlight premium sources of content.

“We are pleased to note tangible progress in our efforts to secure payment for our high-quality content from digital platforms, a global cause which News Corp has led for more than a decade,” said CEO Robert Thompson in a press release. “This development establishes a precedent that changes the terms of trade, and we expect a positive financial impact at our News and Information Services segment, beginning this fiscal year.

Advertising revenue at Dow Jones, which includes the Wall Street Journal, rose 2 percent in the quarter on the “strength” of its digital ad sales. News Corp wasn’t more specific though it did say that online ads account for 42 percent of total Dow Jones ad revenue in the quarter.

Like other newspaper publishers, News Corp. has counted on gains in digital advertising and subscriptions to offset the steep drops in its print operations. That is proving to be increasingly difficult as competition for digital advertising dollars and readers intensifies.

“This year, for the first time, U.S. newspapers have seen their digital ad revenue—and in many cases subscriptions— hit a wall and begin to decline,” writes Gordon Borrell, an independent media analyst, in an e-mail. “Digital ad revenue for newspapers has dropped this year by about 3%, and we’re forecasting it will decline another 7% next year. Meanwhile, digital ad spending continues to rise. Newspapers are still, at their core, print companies trying to whittle the edges off a square business model and cram it into the round hole of digital.”

Indeed, News Corp owns a lot of newspapers. Its U.K. titles include The Sun, The Times and The Sunday Times, which account for approximately one-third of all national newspaper sales. The company also owns 200 newspapers in Australia. In the U.S., News Corp owns the New York Post and the Journal.