Ageless granny, 63, flaunts her incredible figure in photos deemed TOO SEXY for Instagram

A Melbourne grandmother has shown off her incredible figure in a photo shoot deemed too sexy for Instagram.

Lesley Maxwell is a 63-year-old former fitness competitor and professional fitness trainer who regularly flaunts her ageless physique on her social media channels.

The grandmother is back in headlines after posing in a fire themed body suit with lace stockings for Halloween, but the shots were considered too raunchy for Instagram. 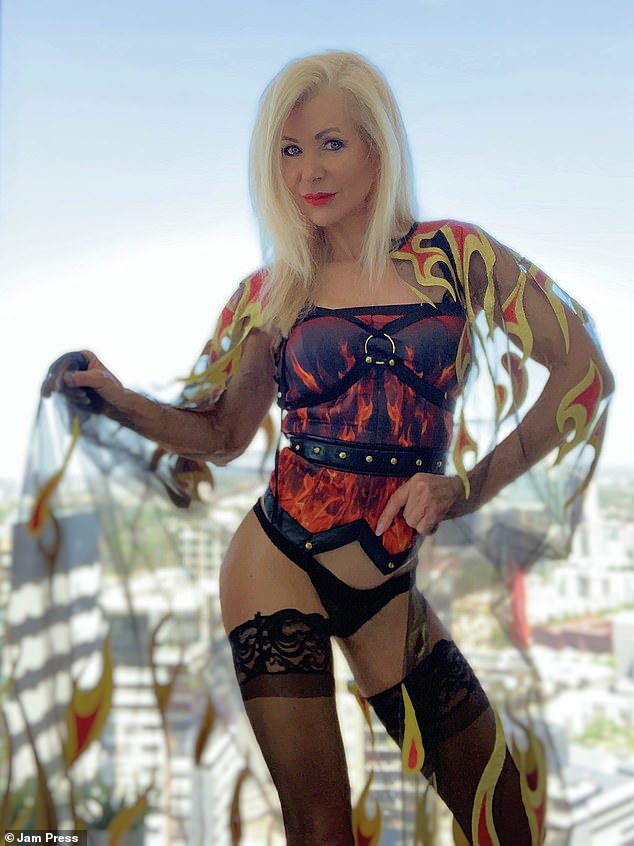 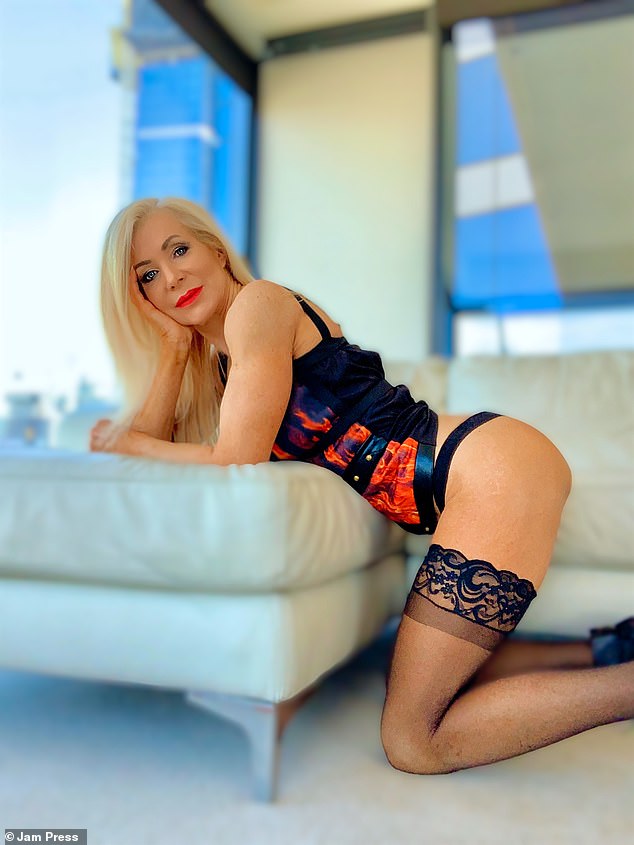 Maxwell’s Halloween photo shoot (pictured) was considered too sexy for her Instagram page, where she has 24,000 followers

Maxwell didn’t start her fitness journey until she was in her late 40s, when she was inspired by a promotion for a body competition on television where glamorous women paraded in heels and bikinis.

‘I had always had a keen interest in fitness and health and I was determined to find a way to nourish my body to look and feel younger,’ Maxwell said.

She became a personal trainer at 48-years-old, and won her first figure competition just a year later.

Maxwell now boasts nearly 30 fitness and sculpting titles, and has her own fitness program called Bring Your Sexy Back, which is targeted to men and women over the age of 40.

‘I used to love being strong and winning bets with boys that I could lift more than them,’ she said.

‘My mum used to tell me ‘boys don’t like girls with muscles’ – but I know they did!’ 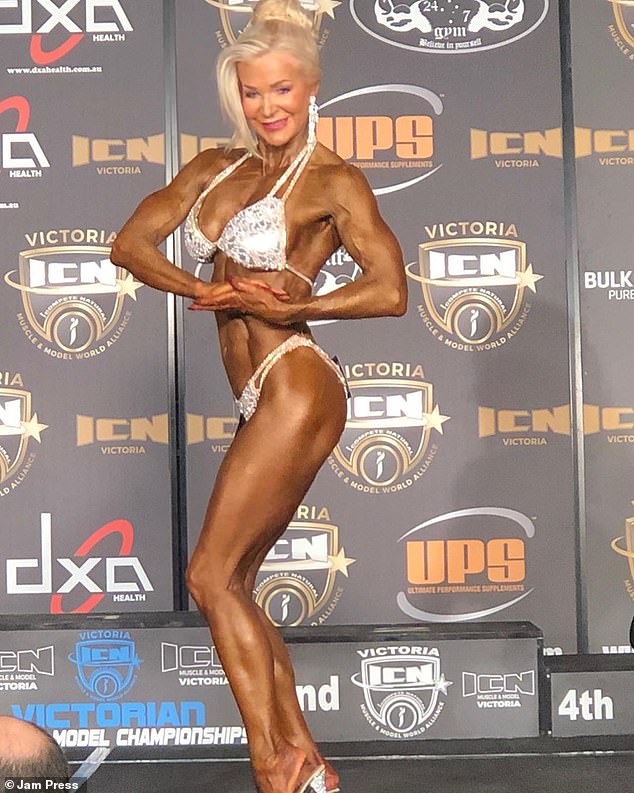 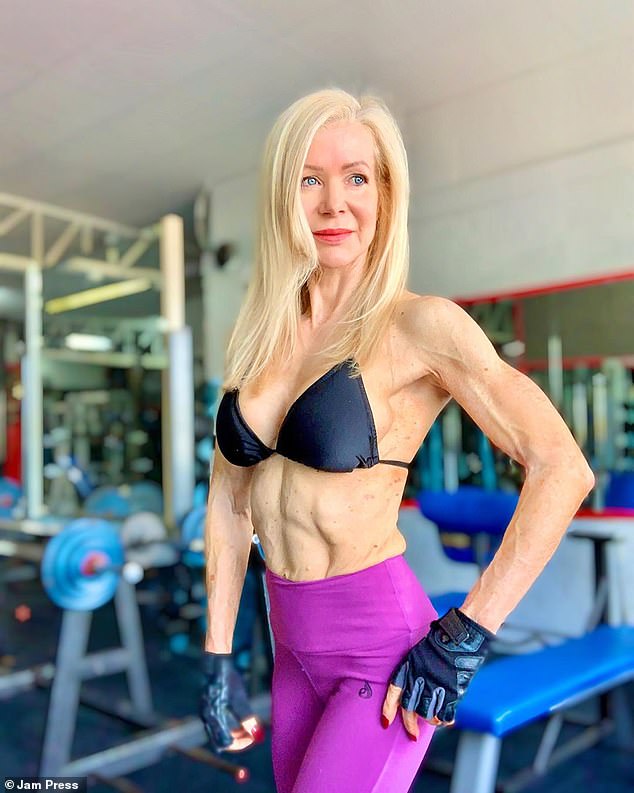 Maxwell (pictured) is in the gym five times a week, where her routine includes dead lifts, squats, chest press, and ab exercises

Maxwell revealed her secrets to keeping her youthful figure through her glamorous fitness lifestyle.

‘Firstly, look after yourself and your body with nutrient-dense food – no refined or junk food!’ Maxwell said.

‘Train with weights to create a younger-looking body, as it can really lift and tone bums and arms better,’ she said.

Although she is a grandmother to three kids, Maxwell’s routine sees her at the gym five times a week for an hour-long session, which includes dead lifts, squats, chest press, and ab exercises.

With this routine, Maxwell claims she is happier and healthier than ever before, with an equally satisfying love life.

‘I’m always approached by younger men, I feel ageless so it works,’ she said.

‘All of my partners have been younger than me, including my ex-husband, whom I had a 13-year age gap with.

‘I’m much happier and confident in myself now than when I was younger, especially since I have made many friends through the gym and competing.’

Newly single Lesley also has a message for older woman who may be too intimated to start working out.

‘I don’t feel judged as I train just as hard as anyone else – it’s a fantastic community and I don’t think age comes into it,’ she said.

‘All I’d say is – don’t wait! I think every woman would like to bring their sexy back.’ 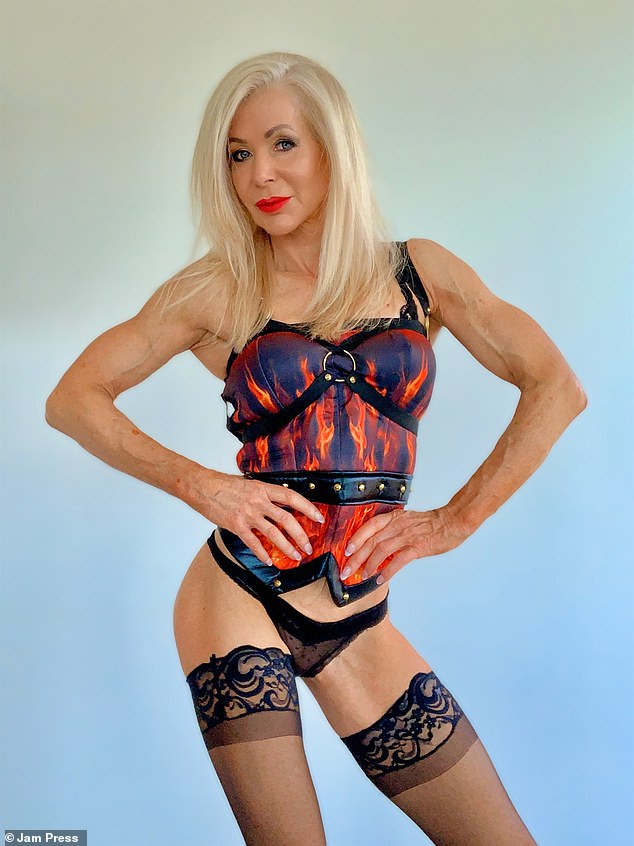 Maxwell (pictured during her Halloween photo shoot) has urged older women not to feel intimidated to start working out, saying ‘I’m much happier and confident in myself now than when I was younger, especially since I have made many friends through the gym and competing.’