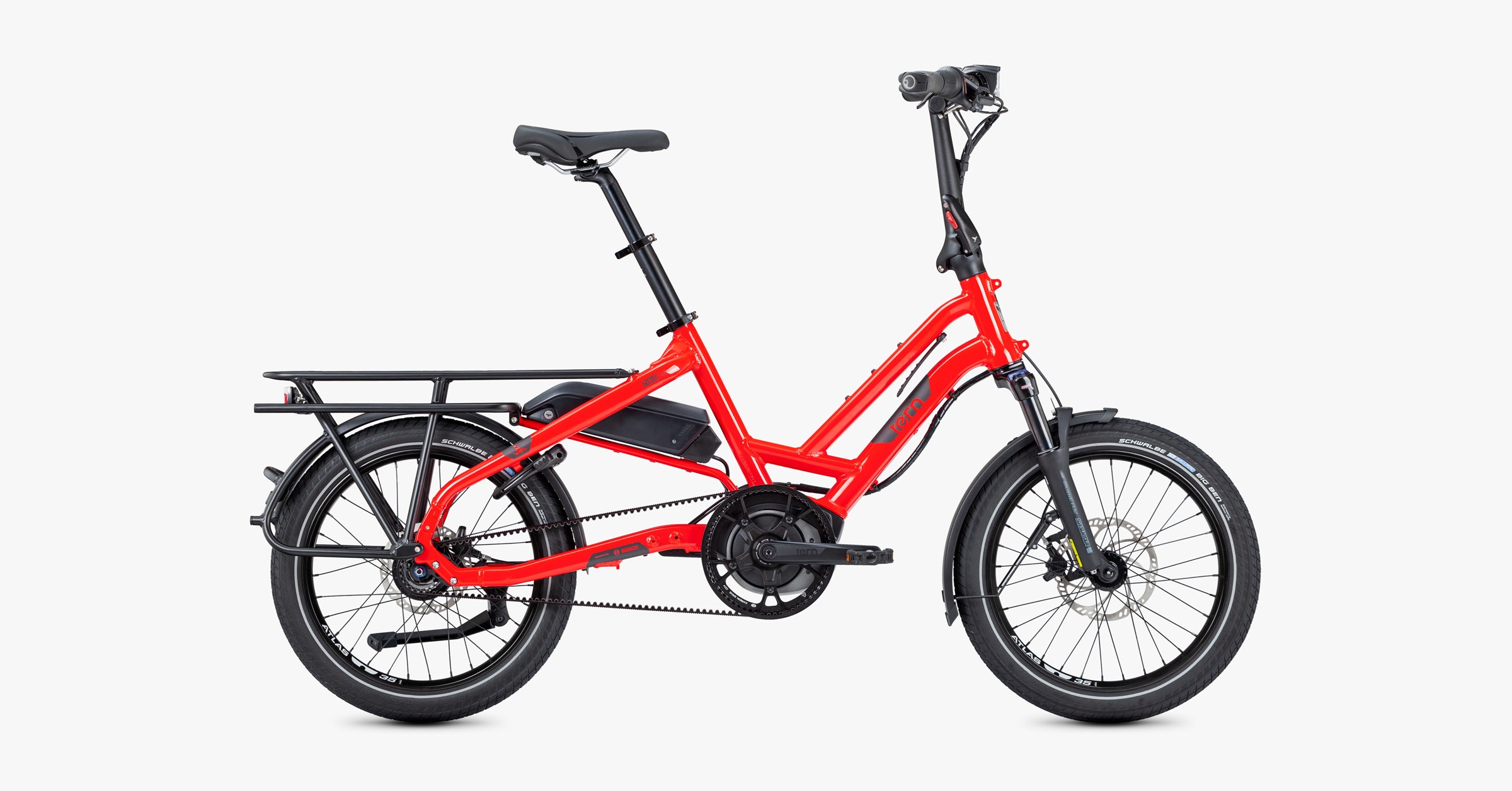 Some people have resting bitch face; I have resting Tern face. The minute I walk into any electric bike shop, a salesperson cannot resist approaching me. “I’ve got just the bike for you,” they say, grinning. Yes, I’ve heard of it. It’s the Tern GSD S10.

To be fair, it’s probably because of my height. I’m under 5’4″, which means that I’m too short to comfortably ride a lot of large electric cargo bikes. Tern, however, is a spinoff from the Japanese folding bike manufacturer Dahon. Its bikes are designed to fit smaller people who live in small spaces.

Next year, Tern will release the HSD, or “Haul Stuff Daily,” bike. It’s 5.5 feet long, shorter than your average road bike and small enough to fit in Portland’s standard bike parking lots, which are 6 feet long. But it can still carry a hefty 374 pounds total—on its extended rack, front rack mounts, or a multitude of other carry options.

For two weeks, I’ve been riding a tester model to pick up my children from school and run errands. It’s fantastic, though you won’t see it at a bike shop for some time.

The HSD comes in several styles and lots of colors. The base model HSD P9 will start at $3,099, but Tern sent me the HSD S8i, which starts at $3,699. It has better hydraulic disc brakes than the GSD and a weather-resistant, low-maintenance Gates Carbon Drive CDX belt (the belt replaces the chain on a regular bike), which I appreciated in this truly vile, wet, early-autumn Portland, Oregon, weather.

It’s a compact, burly bike with an upright, step-through aluminum frame. The wide, comfortable seat and ergonomic handlebars have quick releases to adjust them for heights ranging from 4’11” to 6’5″.

Tern shortened the wheelbase significantly by giving the bike small, thick tires. But with an electric bike, you don’t have to worry about pedaling like a clown. The HSD S8i has a Shimano Nexus 8 hub and a Bosch 400 Wh motor. You can change up to eight gears or switch between four levels of assistance, which you can see on a tiny Bosch Purion LCD screen along with the current speed.

It’s been awhile since I’ve ridden a Bosch motor and I forgot how smooth it is. Unlike cheaper powertrain systems, it doesn’t jerk when I push off or if I’ve miscalibrated the level of power that I need. That smoothness is vital when you’re carrying a few bags and have a kid strapped in the seat on the rack.

Although the bike itself is short, the rack is still long enough to fit both a kid seat and a pannier basket on the side.

Unlike many other bike racks, you don’t need an adjuster to attach the kid’s bike seat, and it will safely carry up to 130 pounds. I have a Thule Yepp Nexxt Maxxi seat, which I attached without much hassle.

Big panniers aren’t compatible with the Yepp seat I own, but I found other options. Portland’s Clever Cycles attached a Hold ‘Em basket for me to the bike’s front mount. That’s one option. You could also attach the bike seat to the front of the rack, freeing enough space for a Bucketload pannier or a Kontti basket behind it. You can modify the bike’s carry options according to your needs.

Tern’s proprietary cargo hold panniers are weather resistant, pack down flat, can hold up to 60 pounds of stuff apiece, and close securely with a magnetic clip. I really like them.

The HSD also comes with all the bells and whistles—well, no actual bell or whistle, but those were the only things it was missing. It has a headlight and taillight, a front suspension fork to help ease bumps, and an integrated Abus frame lock in the front wheel. Oh, and it can be stored standing on its rear rack and the handlebar stem folds down flat (lovely bonuses!).

It was surprisingly easy to use the HSD. Instead of biking it home for 45 minutes in the rain—like I may have had to do with some bikes—I picked it up at the bike shop, folded down the handlebars, flipped up one of my Honda Element‘s back seats, and drove it home.

There’s been a lot of unwelcome road construction around my house. The curbs are misaligned; the roads are full of gravel, with random 4-inch drops that threaten to wreck even very experienced bike commuters. And it’s constantly raining.

One night, I was biking to my local convenience store in the rain, headlight on, with cars whizzing by, when I saw that a huge gap of asphalt had been cut out of the bike line in front of me. I braced for a spill as I steered through the hole, but the HSD’s wide wheels and suspension took me through it. At the store, I quickly locked up the wheel with the Abus lock, picked up a six-pack, and headed home with no further hassle.

So many bike manufacturers think that the way to get more people on bikes is to make them bigger and plushier. That might make a bike more comfortable, but it’s a hassle to maneuver those giant things around. The HSD is comfortable without losing its convenience. It has small, but noticeable perks. It was easy to maneuver out of my garage and through my front gate, for example, and the extended rear rack is much lower than most extended rear racks, so I didn’t feel unstable with my 30-pound toddler riding in a seat.

Multiple gear and power-assist options also made it easy to adjust the level of pressure I wanted to apply to the pedals. The Bosch motor didn’t jerk me around if I didn’t have my gear and assistance levels exactly right.

I know you can buy a lot of the accessories à la carte, but Tern’s proprietary ones are convenient, and pretty great. If I wanted to make a grocery run at 8 pm, I could wheel it out of my garage, fill up the panniers with a car trunk’s worth of bread, milk, and eggs, and be home by 8:45. And with 25 miles on the odometer the ebike’s battery is still at 60 percent—a respectable range.

The only criticism of the HSD I can muster is that the rear rack isn’t long enough for two seats, so this bike may not work for a two-kid household. Personally, I may have to continue saving up my pennies for a GSD. But for anyone for whom size and space is an issue, the HSD will be something to look forward to when it comes out in spring 2020.