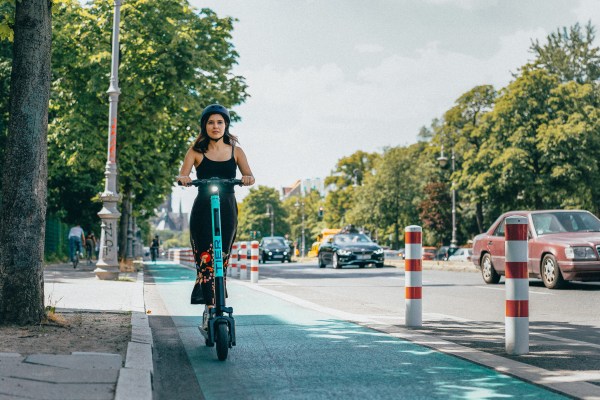 On the heels of Bird closing a $275 million round to help put itself in pole position in the electric scooter market, a smaller European rival has also raised some money to grow its own business. Tier Mobility, a Berlin-based startup that operates a fleet of 20,000 scooters across 40 cities in 12 countries, has raised $60 million, funding that Tier’s co-founder and CEO Lawrence Leuschner said it would invest in further geographical expansion and its technology.

Tier earlier this year started to describe itself as a “micro mobility” player, with plans to augment scooters with other transportation options, but in an interview Leuschner declined to say what those might be, or when they will come online. In the meantime, it’s been upgrading its fleet to a more robust hardware to cut down on maintenance costs (which has typically been one of the biggest strains on scooter startups): these newer scooters have lifespans of around 18 months and now make up some 80% of Tier’s current fleet, Leuschner said.

This latest funding, a Series B, is being co-led by Mubadala Capital and Goodwater Capital. Mubadala is the state fund for Abu Dhabi, which is currently the only non-European market where Tier operates. Mubadala made some headlines earlier this year when it was revealed that Softbank was backing its $400 million fund for European investments. (Indirectly, this also means that Softbank is backing Tier.)

“We firmly believe that micro-mobility as a form of transportation is here to stay, especially in Europe,” said Amer Alaily from Mubadala Capital in a statement. “We are confident that Tier Mobility is best positioned to become the leading player in Europe and globally. We are excited and look forward to building a global category leading company out of Europe.”

Others in this round include insurance giant Axa Germany, Evli Growth Partners, White Star Capital, Northzone, Speedinvest, Point9, Indico, Kibo Ventures, Market One Capital and — an ironic twist when you consider the reputation of scooter users being somewhat on the reckless side — Formula One racing champion Nico Rosberg. The valuation is not being disclosed.

The scooter market is a crowded one, but Tier’s rapid growth points both to the opportunity for those building services in it, and Tier’s own success.

Since raising its Series A (initially €25 million, but expanded to €32 million in February of this year), Tier has grown to 10 million rides, adding 8 million in the last four months both through its direct services and by way of partnerships with others, such as car rental company Sixt. That growth has led Tier to claim that it is currently the fastest-growing mobility company “in the world.” Leuschner — who co-founded the company with Matthias Laug (now CTO) — said the goal now is to hit between 3 million and 5 million rides monthly.

That’s impressive growth, but it comes with challenges. The funding today takes the total raised by Tier to around $95 million. However, relatively speaking, that is actually a modest amount when you consider the hundreds of millions raised by the likes of Bird (capital that it’s using in part to grow in Europe in direct competition with Tier) and Lime.

Tier has taken the view, so far, that big money isn’t the only way to build a big service.

“With our series A funding of €32 million, we built the fastest growing mobility company,” Leuschner said. “We achieved that with a fraction of the capital of Bird and Lime. That shows how efficiently we are operating. With this round we will now accelerate the growth based on our scalable infrastructure and positive unit economics.”

With the scooter market’s unit economics unlike that of car-based on-demand transportation (the vehicles are owned, and there are not drivers to pay out, for starters), he said that Tier is already profitable in some of its markets.

One of the other big sticking points that has hindered the growth of more scooter services has been regulation, and specifically safety concerns, with reports of faulty software and human error / reckless driving both contributing to a number of accidents.

Leuschner noted that Tier has had around 250 accidents to date across its 10 million rides, with “the vast majority minor accidents.”

“We continue to educate users, but I can’t see a significant safety issue compared to other vehicles,” he added. “I think Tier is has taken a leadership role in safety with the safest scooter on the market, permanent education of our users and insurance for every driver in every city.”

In this regard, having an insurance company — Axa — now on board as a strategic investor will potentially see both more safety initiatives rolled out by Tier, but also potentially the emergence of insurance policies provided to customers as part of the service.

All told, the strong growth on the back of conservative capital, combined with the experience of the founders (Laug had also been the co-founder of Lieferando, one of the first big food delivery startups in Europe), and that interesting backing from big industry players, has all contributed to an optimistic outlook from investors.

“Tier Mobility is not only the fastest growing mobility company in the world, but one of the fastest growing companies in consumer tech history,” noted Chi-Hua Chien, the star investor and Goodwater Capital co-founder who had previously been at Kleiner Perkins and before that Accel.

“With phenomenal execution they have emerged as the leading micro-mobility provider in Europe on only a fraction of the invested capital of their competitors. This is a true testament to the uniquely capital efficient and profitable model the team chose to deploy from the outset. Tier’s unique approach to operations and partnerships yields superior unit economics and defensibility.”