Apple Fails To Get It Right In China. AgainTech Companies 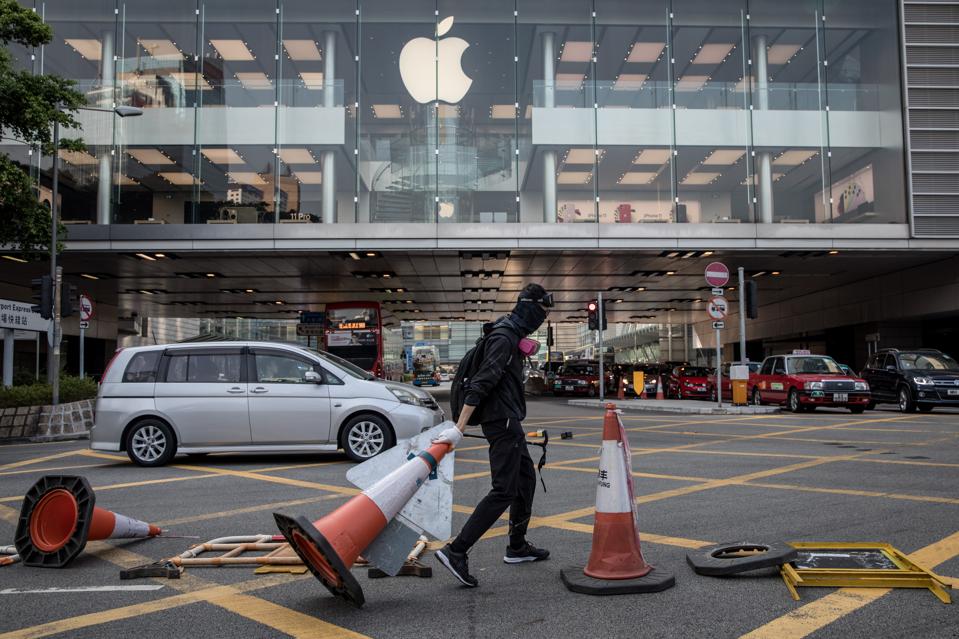 Apple treads a fine line in China. It’s share of the world’s largest smartphone market has dropped to 10% as it has lost ground to local rivals, it has been forced by the U.S. trade war into exploring options for shifting manufacturing away from its primary base, and when an iOS hack was traced to China’s suppression of its Uighur minority, Apple infamously neglected to reference China in its statements, choosing instead to attack Google for inaccuracies in its reporting.

This game of geopolitical Twister was evident again in recent days, after Apple faced heavy criticism for blocking HKMap Live, an iPhone app designed to help Hong Kong’s citizens track the locations of protests and police activity, with the intent, so said its developer, of helping people avoid trouble spots and stay safe. The reason for the rejection was that the app “facilitates, enables, and encourages an activity that is not legal,” Apple explained to the developer, adding that it “allows users to evade law enforcement.”

The app used information from members of the public to identify where trouble has flared up, with emojis for particular types of police action. “We don’t encourage any advice on the map in general,” the developer claims, “our goal is safety for everyone.”

HKMap Live was submitted to the App Store on September 21, rejected on September 26, resubmitted on October 2, rejected again the same day. Now that decision has been reversed and the app has been made available.

“There seems to be some misunderstanding,” HKMap said on its Twitter feed. “HKMap is not an illegal service. During our two months of operation, we have received zero legal complaints.” As for the developer’s decision to mask his real identity, “it’s our freedom—and also due to Hong Kong Police obviously abused their power to baselessly arrest Hong Kongers. Stop criminalizing privacy!”

All of this would be less of a problem for Apple but for its wider China issues, including not dissimilar past rejections of VPN apps needed in China but deemed to be crossing a line, enabling the wrong kind of breaches of the “Great Firewall” that limits electronic communications in and out of the country. Apple CEO Tim Cook explained at the time that “we would obviously rather not remove the apps, but like we do in other countries, we follow the law wherever we do business.”

No easy answers for Apple on China. It is pretty clear here that this was unsurprising bureaucracy around approvals for an app that was self-evidently contentious. And the app does skirt law enforcement, albeit for the right reasons. Ultimately, though, Apple found itself in a no-win situation and made the only decision available. How far up the chain that reversal went, we will never know.

No sooner had the HKMap Live app protests diminished than Apple was under fire again for removing the Republic of China flag emoji, used to represent Taiwan, from the iPhone’s keyboard for users in Hong Kong and Macau. The change happened when iPhones were updated to the latest operating system. Instead of picking the emoji, users now need to type “Taiwan” into their keyboards to see it suggested.

In the meantime, on a macro political level Apple continues to lobby for some restitution over the trade war’s impact on exports and manufacturing and tariffs. As China continues to tread that line, this latest situation in Hong Kong hasn’t helped.

For Apple, things could be worse, it could be Samsung. The Korean manufacturer might lead the world for smartphone shipments but its once strong position in China has all but collapsed. Samsung has now accepted defeat and shut its last manufacturing plant in the country.

This is not a fate Apple intends to endure. The stark reality is that Apple cannot afford to alienate Beijing to such an extent it takes action. The impact to its manufacturing base and its $50 billion in annual China sales would take too heavy a toll.