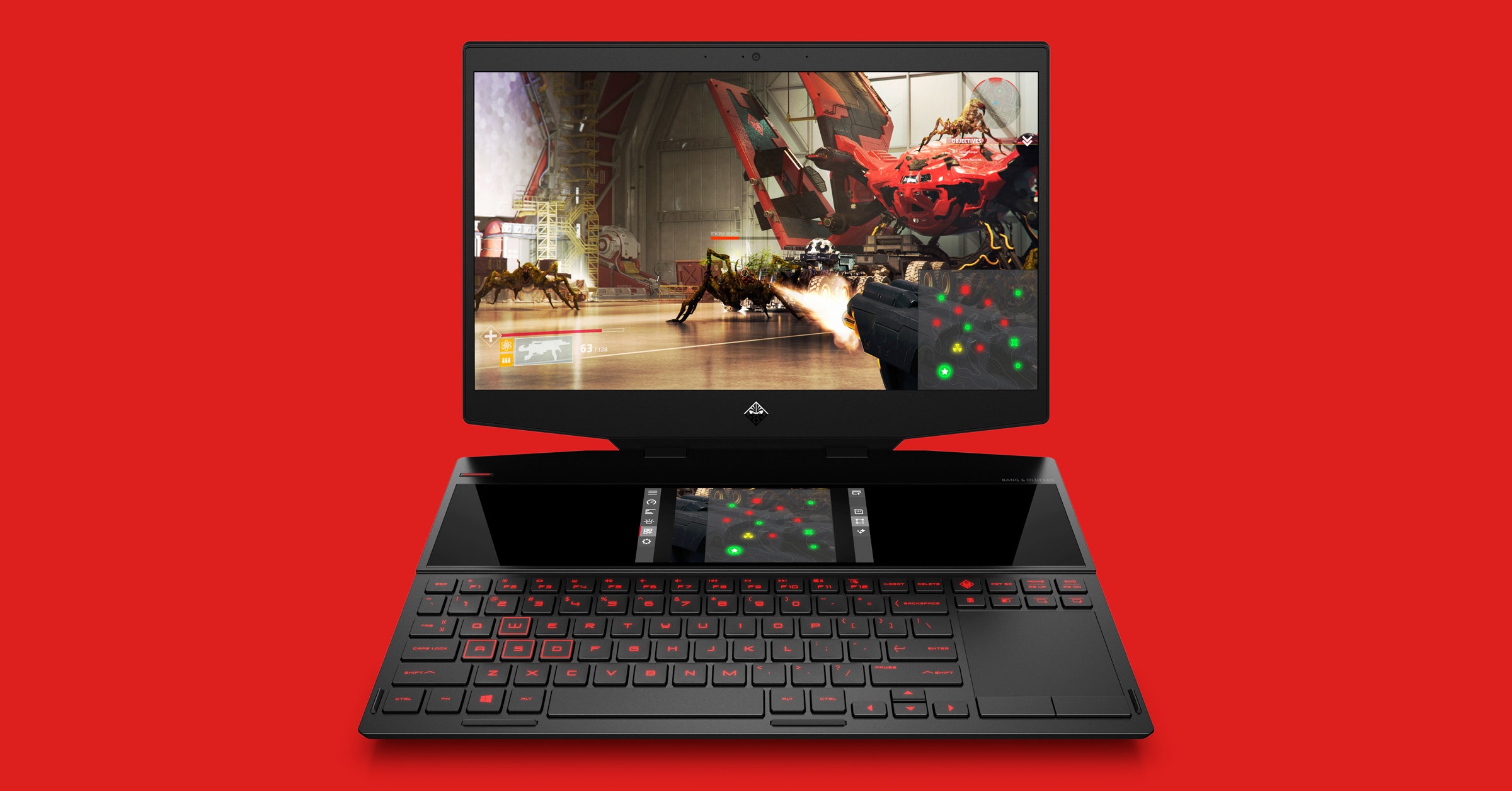 We can start with the honorifics. HP calls the Omen X 2S the “world’s first dual-screen gaming laptop”—presumably with no apologies whatsoever to the Asus ZenBook Pro Duo (not a gaming machine) nor to Razer’s Blade R2 or its Project Valerie (technically triple-screen and not really in existence).

With that out of the way, we can move to definitions. What does dual-screen mean on a laptop? Banish thoughts of two monitors side by side like you might have on your desk; that’s simply impractical. Instead, what HP—and others before it—have done is embed a second screen into the chassis of the laptop, sliding the keyboard down to the bottom of the laptop’s base, leaving a space above the keyboard which allows for a small, second monitor to be embedded in the frame.

It’s a neat trick, and it sure does make for a striking appearance. If you didn’t look closely, you might well assume someone had laid their phone down across their open laptop to more easily multitask.

And, to answer the obvious question, that’s entirely the point of the second screen: to give users—namely gamers—an easier way to do something they’d otherwise be doing on their phone without having to drop out of the full-screen gaming experience. What does that something look like? Really, it could be anything: A Discord feed. A Twitch stream. A game map or a list of cheat codes. It could even be a second game. You can also use this monitor to “zoom in” on a portion of the main screen, magnifying a particularly important portion of the window (such as a mini-map)—though HP notes this will not work with most first-person shooters due to Microsoft Windows limitations.

Outside of gaming, you can use it for anything you’d use a normal second screen for, though at just six inches in size and with 1920 x 1080 pixels of resolution, it makes for a tiny reading experience if you drop anything with text into it. It really does work like a second monitor—and a touchscreen, at that—and it’s fully managed within Windows just like any secondary display.

So is the second screen useful or just a gimmick? In truth, it lies somewhere in between. I didn’t get much out of it while actually gaming, but having a second screen to park Reddit feeds, YouTube videos, or BTC exchange rate charts has at least some value. While not immediately essential, it’s probably one of those things that slowly becomes more and more useful after you’ve had the system for a few months.

As for the rest of the system, it’s as tricked out as any good gaming laptop should be. The design is impressively contemporary, with center-mounted hinges propping up the display (a 15.6-inch, 1920 x 1080-pixel panel, though it’s upgradable to 4K) and a beveled rear edge giving the screen an eye-catching separation between it and the base. Because of the secondary display and the location of the keyboard at the front edge of the base, the touchpad is moved off to the right-hand side. (Sorry, lefties!) I’ve used systems like this before and they really do take some getting used to, though if you’re actually trying to game without a separate mouse, god help you, they can’t be beat.

The snappy keyboard is one of the best I’ve used in recent years, and per-key RGB backlighting is included (with WASD illuminated in red by default). At 27 millimeters thick and 5.2 pounds, it’s reasonably portable though not exactly svelte, but considering you’re toting two monitors around, that’s probably to be expected. Connectivity is exceptional, with three USB 3.1 ports, full-size HDMI, full-size Ethernet, and one USB-C port with Thunderbolt 3 support.

Naturally, the system is tricked out with all the latest specs: 2.6 GHz Core i7, 16 GB of RAM, a terabyte SSD, and Nvidia’s top of the line graphics card, the GeForce RTX 2080. As expected, it destroyed the record on every benchmark I threw at it, though thanks to the march of tech and time, the king of the hill never stays there for long. (I also experienced a handful of crashes, likely due to the extra layers of HP software that make the second screen behave properly.) Screen brightness is good but not great; much less impressive is the dismal one hour, 59 minutes of battery life (based on a full-screen video playback), a sacrifice HP says it consciously made in order to keep the laptop at least reasonably sized.

On the whole, I really enjoyed working (and playing) with the Omen X 2S, both from a performance and a usability perspective. It isn’t cheap ($2,850 as tested), and the secondary screen isn’t perfect, but I will say that it never failed to spark oohs and aahs from onlookers—though that might be more thanks to the loop of cat GIFs I was running on it rather than the technology itself.