Robinhood may be best known its free stock trading, but today it’s rolling out a new version of the newsfeed, adding content from Reuters, Barron’s and market coverage from The Wall Street Journal, with no paywall or additional charge.

In addition, Robinhood is introducing video into the newsfeed, with ad-free videos from CNN Business, Cheddar and (again) Reuters.

The startup, which recently raised $323 million at a $7.6 billion valuation, has been showing more interest in content lately with the acquisition of the financial podcast and newsletter MarketSnacks — and as part of the redesign, the newsletter (now called Snacks) can be read directly in the app.

“A lot of this is not even about making investment decisions,” Robinhood’s Vice President of Product Josh Elman told me. “[Some users] check Robinhood very, very often just to consume the news and understand the companies that they’re watching, the ones that they are invested in and continuing to hold.”

He added that just buying and selling stocks is “sort of a utility,” so Robinhood wants to help its users “to feel informed, to be empowered to make their own decisions.” 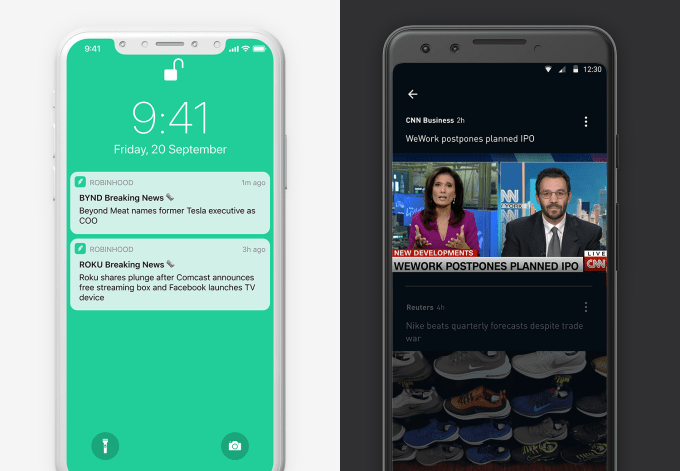 Before redesigning the newsfeed, Elman said the team did a seven-day study, where they asked subjects to create a diary of “all of their experiences reading and understanding market news.”

Among other things, Elman’s team learned that people “really want to read news from multiple, trusted sources,” which is why Robinhood is partnering with these publications. In addition, they saw that people like watching videos: “Even if it’s in the background, ultimately, people really told us they feel more confident and control in their decisions.”

Along with bringing in new content (which, again, is taken out from behind paywalls and is ad-free), Elman said the Robinhood newsfeed also features “all-new algorithms and a whole new display layer.” Robinhood users can see the new interface for themselves, but I was curious about those algorithms.

“We start with the companies you either own and hold in your portfolio or are watching, what types of sources do you frequently like to watch … and we make sure that we’re bringing you that news as much as possible,” Elman said. “And we have a lot of room to grow from here.”