What if Instagram could automatically tell your Close Friends you’re ? (home), ? (working), ? (on the move), or ?️ (chilling and might want to hang out)? That’s the idea behind Instagram’s new companion app Threads, a Close Friends-only messaging experience that opens to the camera with shortcuts for instantly sending specific people photos and videos. Threads offers two brand new features called Status and Auto-Status that allow you to manually set an emoji as an away message to show Close Friends what you’re up to, or opt in to letting Instagram select one automatically based on your location, accelerometer, and even your phone’s battery level. 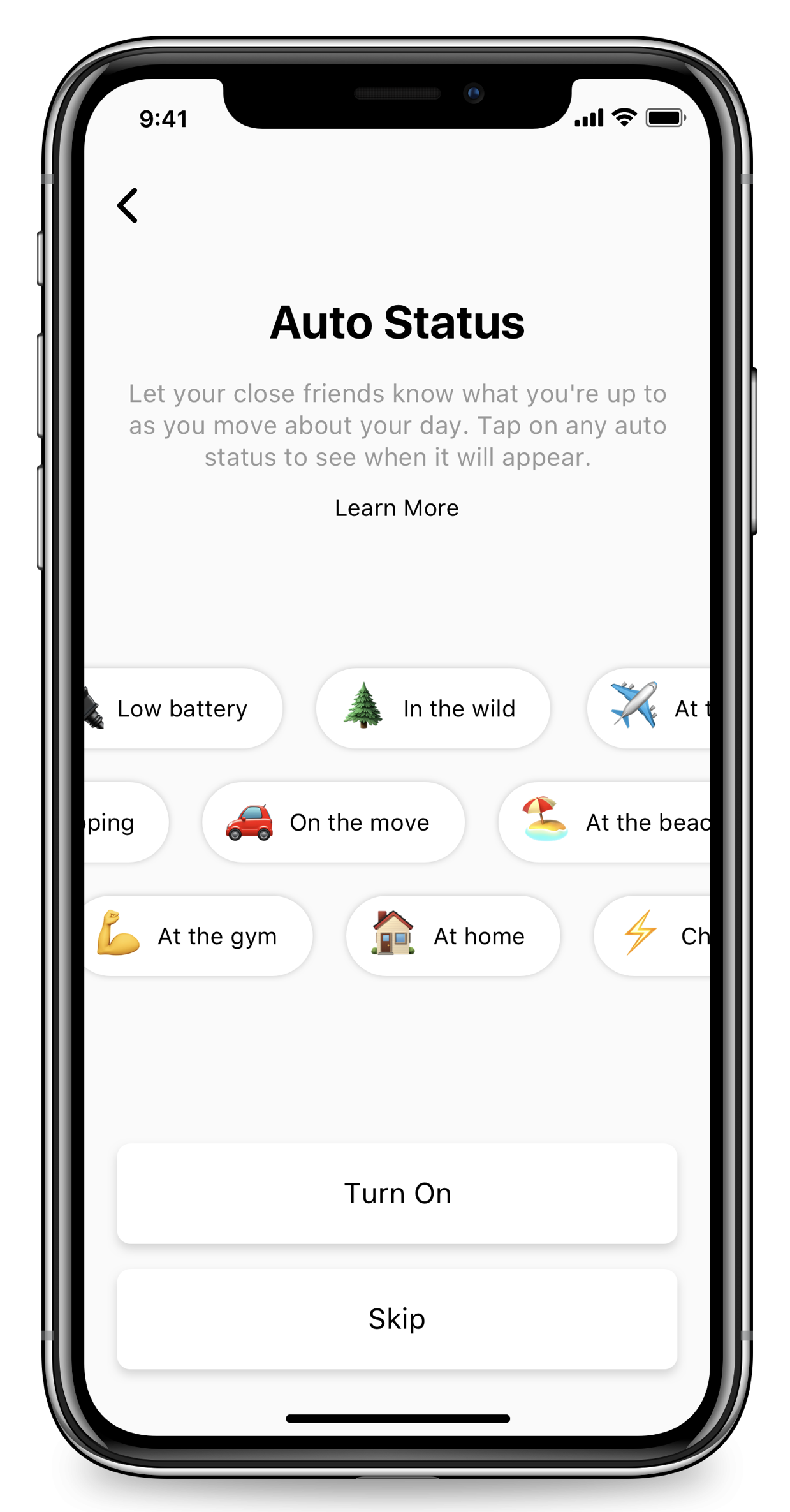 Launching globally today on iOS and Android, this is Facebook and Instagram’s next big swing at Snapchat, specifically targeting its top use case: rapid-fire camera and text messaging with your best friends. Sick of randos in your inbox? Only people in your Instagram Close Friends list show up in Threads so you can trust its notifications are important. You can still just use Instagram Direct in the main app or the two in parallel, though.

What’s most unique is that Threads finally sees the launch the Facebook “Your Emoji” status feature we reported it was prototyping 18 months ago. Threads Status and Auto-Status offer conversation starters, contextual clues to why someone might not respond, and opportunities to meet up offline. But importantly, it leaves out a map or any exact location sharing to avoid being creepy and instead focus on what Close Friends are up to — which determines if they can chat or hang out more than where they are.

Threads offers “persistent connection”, Instagram’s Director of consumer product management Robby Stein tells me. It was designed with three priorities: the ability to “fully control who can reach you”, speed because “If most of your messages only go to a couple of people, why isn’t the experience built around that?”, and “Having more of a connection through the day . . . even if you don’t have time for a conversation.”

By building Threads as a separate app, Instagram has little to lose if it flops and could learn about what features to pull back into its main app. But if it succeeds, Threads cement itself as where you stay in touch with your favorite people, while pigeonholing other messaging options like SMS, WeChat, as Snapchat as noisy channels full of unwanted alerts.

Social networks have an inevitable problem. Eventually out of coincidence and courtesy, you add too many people as friends, filling the apps with people who’s content you don’t care about and who’s messages you don’t always want. Facebook, the catch-all network for everything from family to bosses to acquaintances. That leads people to feel uncomfortable sharing too much, and to distrust that the notifications they get are important. 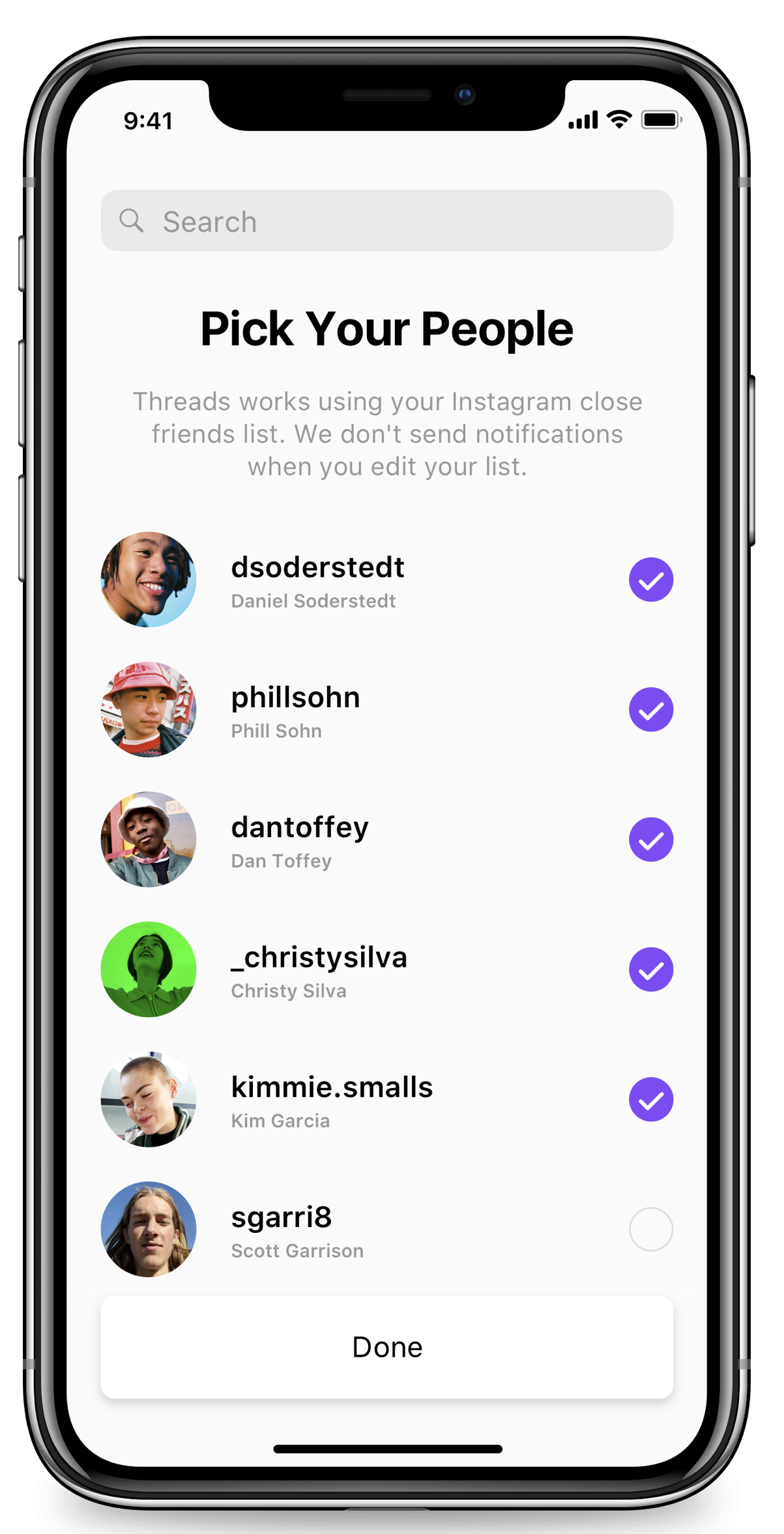 Now Instagram is doubling-down on Close Friends which launched last November at TechCrunch Disrupt Berlin to let you secretly set a special group of best pals who get to see special Stories you set as visible to only them. Facebook had tried complicated Lists products in the past and never seen them gain significant traction because it’s too tough to keep track of who’s in each. Instagram nailed the concept with a single list you edit as needed, though people don’t know if they’re added or removed. I’m surprised Facebook doesn’t already have its own Close Friends feature and it’d be smart to build one.

Instagram already tried building its own standalone Direct messaging app, but shut it down after low usage since it didn’t offer anything beyond what you already got in the main app. Casey Newton of The Verge reported Instagram was building an app with automatic activity sharing in August.

Now with Threads, Close Friends creates the foundation for something different. The only entries in your inbox are Close Friends, which you can edit in the app with the list syncing with your list on Instagram. You can hide any of those chats or group chats with exclusively close friends if you don’t want to see them.

When you open Threads, you’ll see open immediately to the camera like Snapchat. At the bottom are “Camera Shortcuts” that show friends’ faces you can tap on to send a photo or tap and hold for a video. You can also tap the “default camera” shutter and the select everyone you want to message. Since it’s focused on speed, there are no filters or augmented reality masks, just drawing and text overlays for off-the-cuff commentary on what’s going on around you.

Swiping up from the camera reveals the Threads inbox, where you can tap into a conversation for a full-featured messaging experience just like in Instagram Direct. There you can send GIFs, camera roll content, and more. Without unsolicited messages in your inbox, your most important people stay closer to the top. “I see more of my wife’s life now that we’re in this product” Stein tells me.

With Status, you can set an emoji as your away message for one to four hours. You can select from pre-made ones with their own text tag lines, or define a new one from the full range of emoji. Meanwhile, Auto-Status defaults to off but can be turned on to give Instagram the ability to use data signals to choose an emoji for you. It will match your exact location to specific places like Home, Work, cafes, bars, traveling out of town and more. Your accelerometer lets it show if you’re biking or driving. And your phone battery can let it display that you’re low on juice or currently charging.

Why share my batter status? Stein tells me that if you’re charging your phone, you might not be next to it and could be slow to respond. Or if you’re low battery, you might suddenly stop replying all together. That’s helpful knowledge to share with Close Friends even if it’d be weird to post it more widely.

One problem is that who you want to message with often might include family or co-workers that you don’t want to have see your Close Friends Stories, but the list is used for both. At the same time, Threads could boost Close Friends usage, leading people to share more intimate and silly stuff on Stories which do help Instagram earn money thanks to the ads in between.

For now, though, Instagram tells me there’s no plan to monetize Threads directly or show any ads in it. In fact, Facebook won’t even use the exact locations pulled from the app to power ad targeting. Coordinates are only sent so it can match them to locations like a movie theater to show you’re at the movies. Facebook won’t store the locations and they only stay on your device for a short period before they’re deleted.

Still, Auto-Status is sure to rile some who think Facebook and Instagram are too creepy to give any more data. But if the convenience of knowing your friend is available to hang out or is probably too stressed for a chat outweighs the company’s toxic brand, Instagram could develop an important new social behavior. Even if it doesn’t monetize it directly, Threads could keep users locked into the Insta ecosystem where they’ll see plenty of feed and Story ads between message bouts.

Social graph bloat causes a chilling effect on sharing. It’s what Snapchat, Path, and other apps have tried to solve but ended up succumbing to. Instagram accepts that you’ll inevitably connect with people you don’t care much about out of social obligation, pity, or apathy. But by building whole products around just sharing with your favorite subset of people, it could unlock what we self-center — the real us.