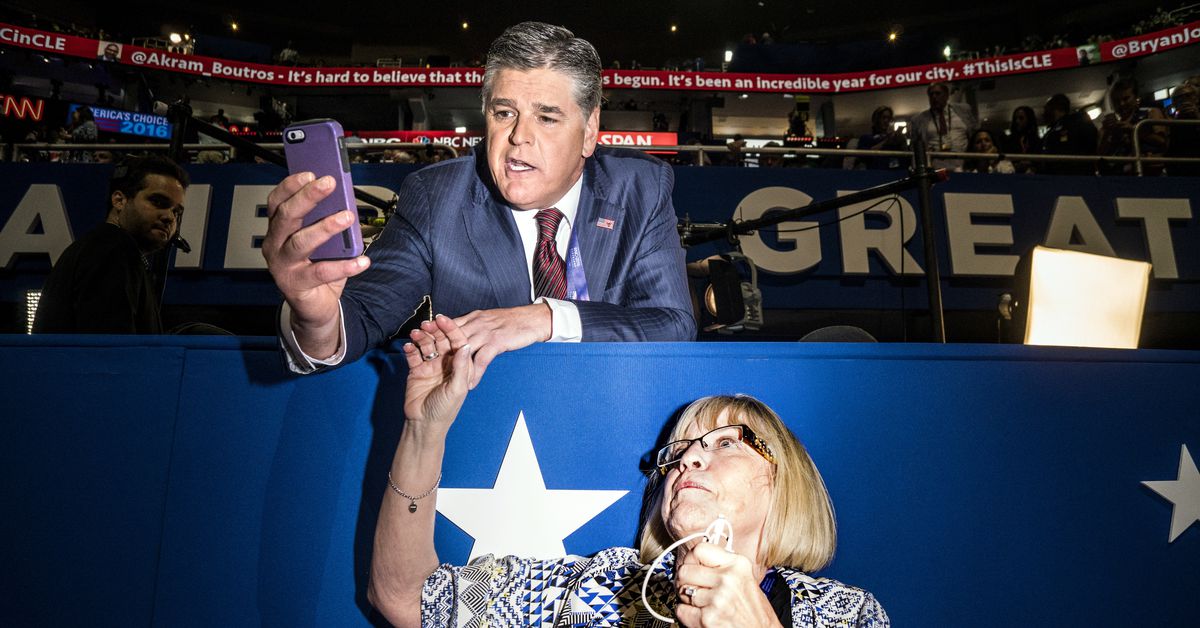 What a difference a few hours makes.

Had you tuned in to Fox News for Monday’s edition of Sean Hannity’s show, you would’ve been treated to President Donald Trump’s personal lawyer, Rudy Giuliani, pushing nonsensical conspiracy theories about prominent Democrats colluding with Ukraine after the 2016 presidential election to dig up dirt on Trump — claims that were met with zero pushback from Hannity.

Giuliani begins his Hannity interview by pushing a conspiracy theory about Obama and Hillary Clinton colluding with Ukraine to dig up dirt on Trump in January 2017 — which doesn’t make much sense since the presidential election had come and gone by then pic.twitter.com/08yHvUYcgJ

Fox News legal analyst Andrew Napolitano: “The president of the United States using foreign governments to influence domestic politics — that was the fear of the framers when they put that impeachment clause in the Constitution.” pic.twitter.com/Rnd62ZjSol

To be clear, none of the above is especially new. Hannity has been the staunchest of staunch Trump backers for years, while more establishment conservative figures like Napolitano and Fox News Sunday host Chris Wallace have established reputations as bastions of rationality amid the surrounding sea of MAGA on their network.

But the juxtaposition between Monday’s versions of Cavuto and Hannity illustrates the split that Trump’s abuse-of-power scandal and the growing support for Trump’s impeachment has wrought at Fox News. The network has spent years serving as something akin to an unofficial arm of the Trump campaign, but it reportedly has started thinking about life after Trump, at least behind the scenes.

The split between daytime and primetime burst into public view

While Fox News has a well-earned reputation for riding the Trump train, network personalities like Napolitano and Fox News Sunday host Chris Wallace haven’t been shy about occasionally criticizing Trump. But now, with a presidency seemingly on the line, the stakes are a bit higher.

Primetime hosts like Hannity and Tucker Carlson along with Fox & Friends are still doing everything possible to spin for the president — including, in Carlson’s case, devoting part of Monday’s show to pushing conspiracy theories about Hillary Clinton — but any criticisms of Trump made elsewhere on the network are increasingly being interpreted as veiled shots at other Fox News personalities. For instance, Wallace went viral last Thursday for sounding off about the “astonishing” and “deeply misleading” talking points being used by Trump’s defenders in the wake of the whistleblower report that accused Trump of abusing his office during his dealings with Ukraine.

Here’s Fox News’ Chris Wallace saying that “the spinning that’s been done by the president’s defenders over the last 24 hours since this very damaging whistleblower complaint came out … [is] not surprising but it is astonishing and I think deeply misleading.” pic.twitter.com/rKfQgGMkLF

Trump — who has been slowly souring on Fox News for weeks now, in part because it won’t rig polls for him — indicated on Sunday that he’s especially sensitive to even the mildest criticism coming from network personalities. After chief national correspondent and occasional Fox & Friends host Ed Henry did an interview with right-wing pundit Mark Levin in which Henry gently pushed back on Levin’s pro-Trump talking points, Trump became so incensed that he started retweeting any and all anti-Henry tweets he could find, including one posted by a parody account that makes fun of him for disliking sharks.

Notably, however, Trump has had nothing to say about Wallace’s remarkably hard-hitting interview with White House adviser Stephen Miller on Fox News Sunday a few hours later — one in which Wallace demolished Miller’s talking points and wouldn’t let him get away with deflections that are standard fare on Hannity.

“This is an exercise in obfuscation” — Stephen Miller has no response when Chris Wallace presses him about why Trump went against his own Pentagon & State Department and withheld Ukrainian aid pic.twitter.com/kP6ht7LwSJ

(Trump has posted many tweets over the years praising Wallace but attacked him for interviewing Democratic presidential candidate Pete Buttigieg in May, writing, “Fox is moving more and more to the losing (wrong) side in covering the Dems … They forgot the people [who] got them there. Chris Wallace said, ‘I actually think, whether you like his opinions or not, that Mayor Pete has a lot of substance … fascinating biography.’ Gee, he never speaks well of me — I like Mike Wallace better.)”

Again, Wallace conducting a tough interview with a Trump administration official is far from unprecedented. But the split between Fox News’ daytime and primetime burst into public view last week when afternoon host (and arguably the network’s most outspoken Trump critic) Shepard Smith feuded for two days with Tucker Carlson, a primetime host who, like Hannity, reliably defends the president. The conflict erupted after Smith’s show featured commentary from Napolitano last Tuesday in which he suggested Trump’s dealings with Ukraine amounted to crimes.

Carlson fired back that night by giving former prosecutor and frequent Fox News primetime guest Joseph diGenova a platform to bash Napolitano, calling him “a fool.” Smith responded the next day by characterizing diGenova as “a partisan guest” and criticizing Carlson for not defending his colleague. According to Vanity Fair’s Gabriel Sherman, the feud only came to an end after network brass admonished Smith to stop attacking Carlson or risk losing his show.

If Sherman’s reporting is correct about Carlson effectively winning that feud, he and diGenova weren’t able to savor it for long. In yet another stark illustration of how complicated the dynamic at Fox News has become, Wallace reported on the same edition of Fox News Sunday in which he interviewed Miller that diGenova has been “working off the books” with Giuliani to help Trump dig up dirt on Joe Biden — a revelation diGenova has since admitted to. And yet Wallace, while breaking that news, failed to mention that despite his secret work for Trump, diGenova and his wife, Victoria Toensing, have made over 90 Fox News appearances this year alone.

The split that erupted in front of cameras last week reportedly reflects behind-the-scenes tensions. In his Vanity Fair piece, Sherman reports that Lachlan Murdoch, eldest son of Fox News founder Rupert Murdoch, has recently “been holding strategy conversations with Fox executives and anchors about how Fox News should prepare for life after Trump.”

Those conversations have apparently been expedited by the whistleblower complaint and the broader abuse-of-power scandal, which Sherman reports that even Hannity is concerned about:

Sean Hannity told friends the whistle-blower’s allegations are “really bad,” a person briefed on Hannity’s conversations told me. (Hannity did not respond to a request for comment). And according to four sources, Fox Corp CEO Lachlan Murdoch is already thinking about how to position the network for a post-Trump future. A person close to Lachlan told me that Fox News has been the highest rated cable network for seventeen years, and “the success has never depended on any one administration.” (A Fox Corp spokesperson declined to comment.)

But whatever private concerns Hannity has, they haven’t yet manifested themselves on his show, which remains all Trump talking points all the time — even if he seems to be a little less enthusiastic about the act than he used to be.

If Sherman is right about network brass siding with Carlson instead of Smith, that indicates that higher-ups aren’t dismounting the Trump train just yet. Ultimately, viewers will know that Fox News is really changing when primetime hosts either start criticizing the president or are replaced with hosts who will — and we aren’t anywhere near that point yet.