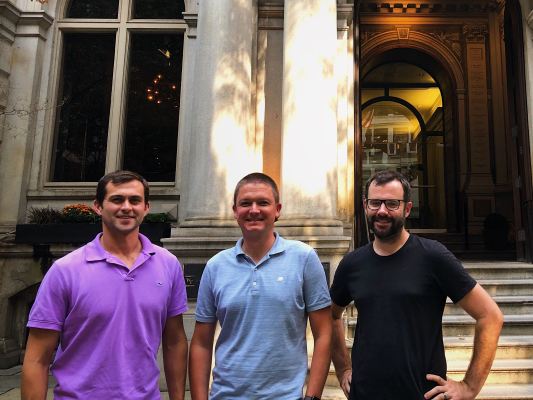 Research when to sell your shares in a privately held company, and the results may have you laughing — not because they’re funny but they’re because there’s an almost comical amount of information available out there. From blog posts to advertisements to advertorials to calculators, the data is overwhelming to the point of being useless.

It’s a problem that Matt Venables and Tom Hennessy — both former execs at the peer-to-peer payments company Circle —  experienced first-hand across numerous startup jobs. The more they looked to understand what their equity was worth and how to sell it without making a massive financial misstep, the more frustrated they felt.

Enter Vested, their three-month-old, Boston-based startup, one that is already backed already with $1.2 million from UnderscoreVC and Boston Seed Capital, and which — if they’re exceedingly lucky — will become the first stop for many thousands of startup employees who are in the same boat that the two once were.

What these individuals will find, promises Vested: access to secondary outfits that offer employees liquidity and to loan providers, but as crucially, they say, plainly explained information around taxes, along with competitive data about different industries and other recent stock sale information. More specifically, Vested will make available on its platform a lot of data that’s right now tricky to find but that VCs and data analysts tend to use, including public records filings, salary information, and 409a valuations.

Hennessey explains the pitch this way: “Matt and I have both some sold shares on the secondary market, and the process was non-transparent and not a fair process. But we realized the problem is much bigger than that — that the bigger issue is really around private equity compensation. The misunderstanding starts from day one. We’d love to capture employees before they ever sign an offer letter, then keep them along the way, so they understand at what points it makes sense to exercise their options and why.”

Ultimately, the goal is guide more employees to exercise responsibly and to convert option holders into shareholders, because the popular alternative, apparently, is for employees to do nothing at all. Says Venables, “Something like 80 percent of options are ever exercised. It’s abysmally low because people are confused, they wait too long, and [the rising value of their holdings] triggers the [alternative minimum tax]. A lot of people leave their jobs within a couple of years and they just decide it’s not worth the hassle.”

Of course, it’s very early days. Venables and Hennessey say they’ve already spoken to numerous secondary exchanges that want to work with Vested, which will serve as a kind of offer aggregator. To motivate the exchanges to put their best foot forward, Venables adds that, “In time, the most compelling offers will be surfaced first” to employees open to selling some of their holdings.

The same will go for lenders offering non-recourse loans to Vested visitors who want to exercise more options than they can afford at the moment, say the founders.

As for Vested’s business model, the idea is to receive a finders fee from both the exchanges and the lenders. The company also plans to offer a low-cost subscription product that goes above and beyond what an employee can find by by visiting Vested’s site. One idea is for them to receive push notifications when a buyer expresses interest in their company’s shares, though Venables and Hennessey say they’re  contemplating a host of other bells and whistles, too.

Step one, naturally, is to build up awareness around Vested, and then attract employees in search of better, clearer, more actionable information. In the meantime, the duo may need to watch out for the 600-pound elephant in their space — Carta, which helps private company investors, founders, and employees manage their equity and ownership and that raised a big round of funding led by Andreessen Horowitz earlier this year to build out a secondary marketplace.

What if Carta tries killing off Vested before it ever has a chance, we asked the founders on a call earlier this week.

Pictured above from left to right: Vested cofounders Tom Hennessey and Matt Venables, along with their VP of Design, Nat Tarbox.