Recent surveys, studies, forecasts and other quantitative assessments of the progress of AI, highlighted among other findings, disagreements about the impact of chatbots: Do purchase rates go down when people find out they are interacting with a chatbot? Or do chatbots actually increase customer satisfaction and loyalty? And are chatbots already successful in replacing human workers? 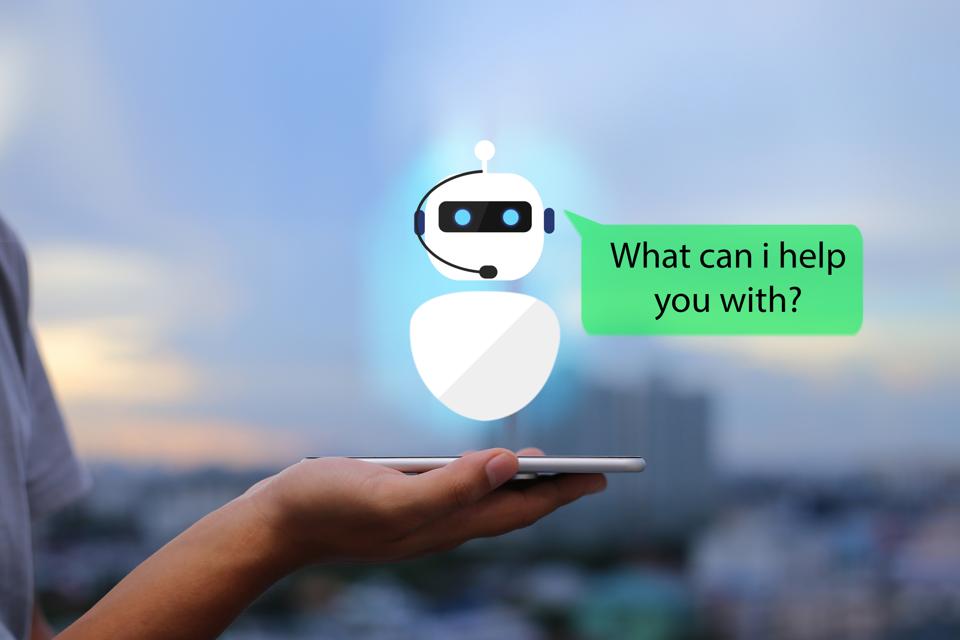 A disclosure of chatbot identity before the machine–customer conversation reduces purchase rates by more than 79.7%; when consumers know the conversational partner is not a human, they are curt and purchase less because they perceive the disclosed bot as less knowledgeable and less empathetic; chatbots are four times more effective at selling products than inexperienced workers [Study of 6,200 customers of financial services company published in INFORMS PubsOnline]

71% of consumers say they are satisfied with their smartphone voice assistants, such as Siri, and 62% say they were satisfied with the chat assistants they find on a company’s website; 74% say they use conversational assistants for researching or buying products and services, and other functions; 74% of organizations say that conversational assistants are a key enabler of the company’s business and customer engagement strategy; 76% have realized measurable benefits from voice and chat assistants, e.g., increase in Net Promoter Score (NPS), customer wait reduction time of more than 5 minutes, and more than 20% increase in first call resolution [Capgemini survey of more than 12,000 consumers and 1,000 executives from consumer products and retail, financial services, and automotive organizations]

Twice as many consumers surveyed in 2019 would knowingly engage with chatbots because they are “very helpful,” compared to 2018 respondents; 83% of consumers said they’d make messaging their primary means of contacting customer support if they could be guaranteed an immediate response, compared to 76% in 2018; 54% of consumers say customer service has gotten better in the past year, compared to 43% in 2018 [Helpshift survey of 2,353 consumers in the US, UK, Netherlands, Germany and France]

TD Ameritrade Holding Corp. hasn’t needed to hire any new human agents since it began offering text- and voice-based chatbots to clients in 2017. Progressive Corp. expects to save about $5 million this year because fewer conversations require human agents. The company has also seen undisclosed revenue increases as customers buy more insurance policies because they can get answers to questions about insurance coverage quickly and at any time [Wall Street Journal]

45% of executives say a popular use case for AI is proactive, or “predictive” customer service that can identify client needs, issues, and support requests in a bid to best prepare staff for handling these types of issues [Oracle and ESG]

Built on a corpus of more than 200 billion photos submitted by users, Pinterest’s AI technology can accurately identify more than 2.5 billion objects in photos of fashion and home décor, provide a link to retailers that sell it and show photos of similar items that can be purchased [Wall Street Journal]

Over the next three years, 70% of consumers, on average, will replace their visits to the dealer, store, or bank with their voice assistants [Capgemini survey of more than 12,000 consumers]

Port operators said the benefits of AI-powered systems include operational consistency and enhanced equipment utilization (86%), enabling teams to work smarter and faster (60%), improving safety (47%), allowing for better management of billable events (33%), and improving environmental compliance (12%); 39% of respondents said applying AI to tasks such as container handling equipment (CHE) assignments and decking could increase terminal productivity by as much as five-to-six moves per hour [DC Velocity]

Out of the top 100 organizations in each sector, 48% of automotive companies, 23% of consumer products and retail companies, and 17% of retail banking and insurance firms have deployed voice assistants [Capgemini survey of more than 12,000 consumers and 1,000 executives from consumer products and retail, financial services, and automotive organizations]

11% of port operators say they have deployed “some” AI into terminal operations, and 56% say they were still in learning or piloting phases [DC Velocity]

When tested against real data from 1984 to 2017, a convolutional neural network was able to predict El Niño states as far out as 18 months; the AI model was only about 74% accurate at predicting El Niño events 1.5 years into the future—still better than best current climate model, which is only 56% accurate for that time frame [Science]

AI2 researchers have developed an automated method for extracting evidence of supplement-drug interactions (SDIs) and supplement-supplement interactions (SSIs) from scientific text. They processed 22 million abstracts from PubMed and extracted evidence for 55,946 unique interactions between 1,923 supplements and 2,727 drugs (precision: 0.77, recall: 0.96), demonstrating that learning the task of drug-drug interaction (DDI) classification transfers successfully to the related problem of identifying SDIs and SSIs [arXiv]

The Conference on Neural Information Processing Systems (NeurIPS) received 6,743 paper submissions this year, up 39% from last year, and double the number of submissions in 2017.

Chinese AI startups received $6.1 billion in VC funding over the past four years, almost 70% more than their U.S. counterparts which raised $3.6 billion during the same period; the year 2015 was a turning point, when China overtook the U.S. in the number of patent applications filed in the area of AI; among the 2,100 spots for top-cited AI researchers, only 158 were occupied by scholars from Chinese research entities [Lux Research]

Internet advertising will account for 52% of global ad spending in 2021, with television making up 27% and newspapers/magazines 9% of the market [Zenith Media/Statistica]

The Life of Data, the fuel for AI

Among the 10 billion global online transactions iovation screened from September 2018 to September 2019, it identified 9.14% as risky in the insurance industry compared to 5.09% across all industries [iovation]

Only 1% of misconfiguration incidents in enterprise infrastructure are known—companies claim they average 37 per month, when in reality they experience 3,500; out of these 3,500 monthly real-world misconfiguration incidents, 73% are eventually resolved, leaving 27% potentially vulnerable to cyber attack [McAfee survey of over 1,000 enterprises and analysis of billions of data points]

“…statistics are no substitute for real-world understanding. Instead, there is a fundamental mismatch between the kind of statistical computation that powers current AI programs and the cognitive-model construction that would be required for systems to actually comprehend what they are trying to read”—Gary Marcus and Ernest Davis

“Our guess is that in two to three years, [deepfakes technology is] going to be perfect. There will be no way to tell if it’s real or not”—Hao Li

“We need to talk about mitigation and limiting harm, not solving this issue. Deepfakes aren’t going to disappear”—Bobby Chesney

“I think papers like this [recommending which YouTube video to watch next] are fascinating because they read like the notes of janitors servicing some vast machine they barely understand – we’re in a domain here where the amounts of data are so vast that our methods to understand the systems are to perform live experiments, using learned components, and see what happens… The 21st century will be defined by our attempts to come up with the right learning systems to intelligently & scalably constrain the machines we have created”—Jack Clark