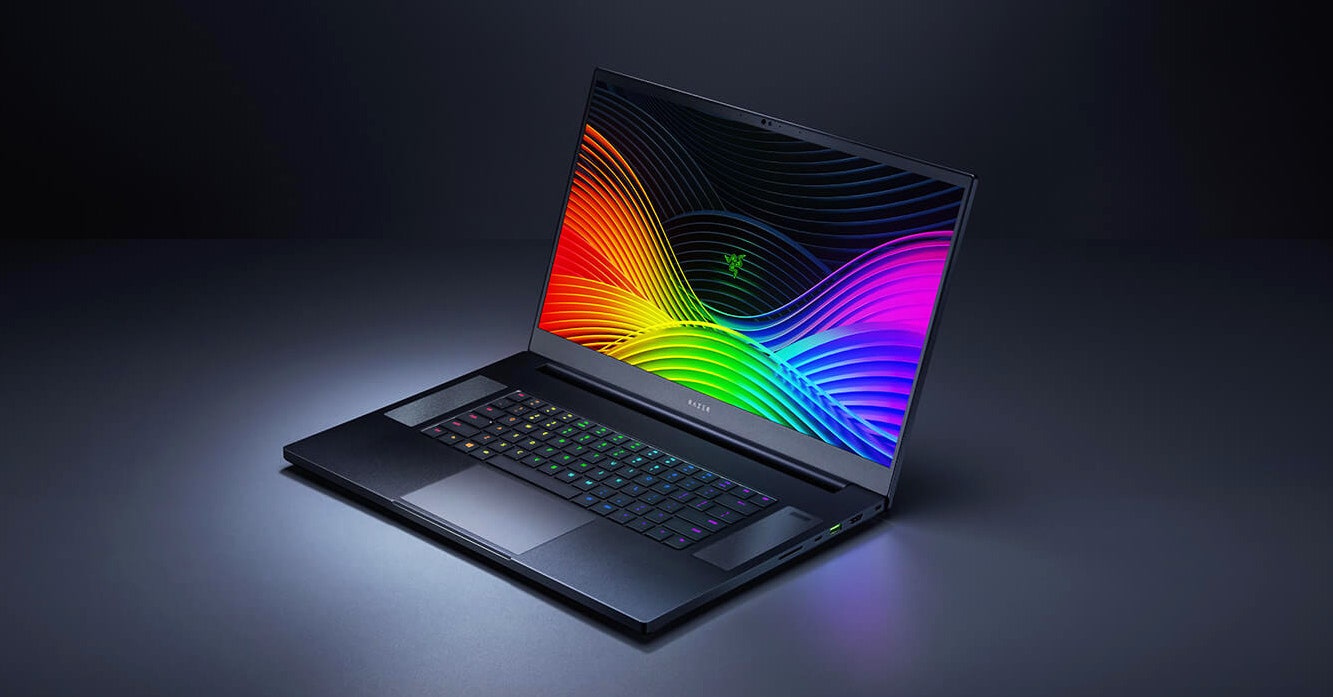 Laptops usually come in one of two flavors: 13-inch for portability or 15-inch for horsepower. Simple. Easy-peasy. Occasionally though, a manufacturer makes a laptop outside of that binary. Sometimes they’re itty-bitty 12-inch ultrabooks, designed to slip into manila envelopes (our favorite laptops). This time, pendulum has swung the other direction, yielding the Razer Blade Pro, a 17-inch speed demon.

Razer’s high-end gaming crams desktop-grade performance into a laptop that’s as thick as a pack of playing cards.

When the Blade Pro 17 first arrived, I worried that maybe Razer sent me the wrong review unit. On its own, in the box, it doesn’t look like a 17-inch laptop. It’s a trick of the eye: The Blade Pro 17 is thinner and lighter than most laptops its size, though less portable than its 15-inch sibling.

When it’s clammed shut, the Blade Pro 17 looks like a thin 0.8-inch-tall solid block of matte-black aluminum with sharp, precise edges and a trio of neon green snakes coiled around the lid. Open it up and you’ll notice how massive the display is, surrounded by razor-thin bezels. Everything, right down to the hinge, is spare and robust, as big as it needs to be without being bulky.

Don’t let that svelte profile fool you. When you try to fit it into a messenger bag, there’s no mistaking it for a smaller laptop. Stuffing the Blade Pro 17 into a standard-sized messenger bag is not easy. I had a much easier time fitting it into a backpack. Still, that’s 6 pounds of computer you’re carrying around. It is impressively light for a 17-inch laptop. I had to keep reminding myself of that as I stopped to adjust my straps over and over again, sweating and beet red during an otherwise routine commute.

Typing on the Blade Pro 17 is the kind of experience that spoils you. The keyboard feels springy and responsive, tactile and quick. Even the keycaps feel good under your fingertips. They have a matte texture that doesn’t attract oils or dirt the way other keyboards might.

Since this is a Razer product, it also has Chroma lighting. The keyboard can be customized with the included Razer Synapse software. Each key has its own LED lighting that you can change individually, or load with predesigned lighting patterns.

The touchpad has a glassy-smooth matte finish that feels every bit as premium as it should. It’s responsive and supports Windows Precision Touchpad multitouch gestures. But its placement is off. Situated between the leftmost edge of the spacebar and the rightmost edge of the control key, it’s a good, luxurious size. But it’s too close to the base of my thumb. When typing this review, my cursor kept jumping around the screen, occasionally clicking on things as I typed. I had to place my right hand at an uncomfortable angle to avoid ghost tapping it. I’d probably get used to it eventually, but it’s a pain (literally). Two out of five of my friends’ thumbs grazed the touchpad while typing. If you’re lucky, your thumbs will be in the majority.

Our review unit was the fully-loaded model, featuring a 2.6 GHz 9th-generation Intel Core i7-9750H processor with six cores, 16 gigabytes of RAM (expandable up to 64 GB), and a 512 GB solid-state drive.

Razer included some expandability, which is a pleasant surprise for tinkerers who want to invest in hardware and upgrade it over time. The Blade Pro 17 has a vacant M.2 slot which you can fill with up to 2 terabytes of additional storage. Graphically, the Blade Pro 17 boasts a Nvidia GeForce RTX 2080 with Max-Q design. All that horsepower comes at a high price. It starts at $2,500 but our maxed-out review unit would run you $3,200.

That’s a lot of numbers, but what they all add up to is lightning-fast performance. The Blade Pro 17 easily passed all my benchmarks and practical tests. Whether you’re editing 4K video or slaying worm gods on the frozen dunes of Mars in preparation for the upcoming Destiny 2: Shadowkeep expansion, the Blade Pro barely breaks a sweat.

It doesn’t actually sweat—that would be weird—but it does have a vapor chamber cooling system. That’s just a fancy way of saying it’s super good at keeping itself at manageable temperatures. A sizable gap and exhaust vent near the display’s hinge also helps it chill out. Cooling is one area where Razer laptops have improved year over year, and it’s an important one.

I never felt like I had to move it off my lap, even though I did most of my testing in shorts. My lap never felt chafed, scorched, or even lightly crisped.

In everyday use, the Blade Pro 17 gave me almost a workday’s worth of battery life, about six hours, depending on my workload. Running the battery down using a video loop, I saw about seven hours of battery life. Gaming on the battery, which is always a bad idea, saw the battery run down in 2 to 3 hours, but that’s going to vary wildly depending on which game you’re playing.

This isn’t the kind of laptop you’d take to a café to get some work done. It’s a desktop replacement in the fullest sense of the term, complete with 3 standard USB ports, 2 USB-C ports, a slot for an SD card, ethernet, Thunderbolt, and HDMI. It’s made for life on a desk, plugged into a wall.

With 17 inches of screen real estate, you might expect a 4K display. Instead, the Razer Blade Pro 17 ships with a 1,920-by-1,080-pixel (HD) display with a smooth 144 Hz refresh rate. Some of you may dislike that. At 4K, you’d get ultra-crisp resolution, and some solid future-proofing for games, but it usually means a slower refresh rate—meaning your games don’t look as smooth as they could. They’re slightly choppier.

With a 144 Hz display, though, your games look buttery smooth and hyperreal when they hit 144 frames per second. That’s because the frames are flying out of your graphics card as fast as your display can render them. In every game I tested—Destiny 2, Call of Duty 4, Apex Legends, to name a few—hitting or exceeding that threshold was exceptionally easy for the Blade Pro 17’s RTX 2080 graphics card, even at maxed out, or near-maxed-out, graphics settings. That’s a credit to the 1080p resolution.

Even the best gaming laptop still struggles with 4K gaming at times, and nothing short of a desktop could come close to hitting 144 Hz at 4K. It would’ve been nice to have a pixel-dense option, but it’s understandable why Razer chose refresh rate over resolution.

Colors are vibrant and accurate and the screen’s matte finish makes everything vivid and legible even in bright rooms and near-direct sunlight.

The Blade Pro is designed to provide a near-desktop-quality gaming experience, and it absolutely achieves that goal. As a 17-inch laptop, its biggest drawbacks may be its size and weight. It’s heftier than a normal laptop, though less than you’d think, given its power. The positioning of its touchpad is the only small, but noticeable, issue I had. My thumb would not stop tapping it while I typed.

You might have to adjust your typing stance a bit, but there isn’t a better 17-inch gaming laptop on the market. If you’d like something a little more portable, check out the Razer Blade 15: It can be kitted out with nearly the same hardware as the 17-inch model, and it’s considerably cheaper. But if you’re aiming high, the Razer Blade Pro 17 is one of the best laptops of 2019.