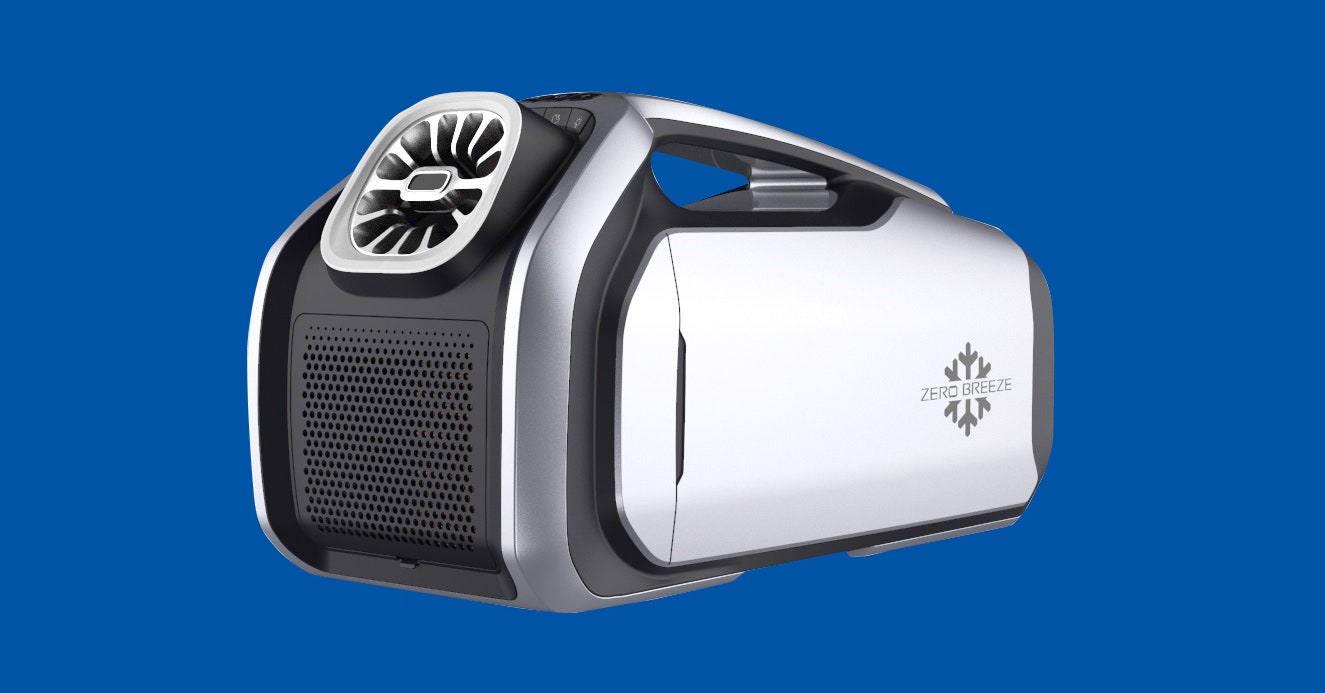 The 1995 movie Congo may be most noteworthy for Tim Curry’s over-the-top line readings (“A diamond mine of incredible bounty!”). However, I’ll personally remember it for an otherwise throwaway moment in which our jungle-bound diamond hunters are asked by Laura Linney’s character whether they’d like a portable air-conditioner for their tents. (“Well, I suppose it is a bit much…”)

Linney’s porta-AC units were no bigger than a small lunch pail, easily tossed into your backpack to help with those sweltering, sweaty nights in the bush. Sounds perfect for those of us with a distaste for heat. And so, when I heard about the Zero Breeze Portable Air Conditioner, I had to wonder whether a high-tech fantasy posited nearly a quarter-century ago was finally coming true.

The answer is, well, yes and no. A quick visit to Zero Breeze’s home page reveals the Zero Breeze Mark II unit in the flesh. (The first version was successfully crowdfunded some three years ago.) It looks tiny, but I was soon reminded that photographs can be misleading without a banana for scale. While the picture makes the ZB2 seem like it’s roughly shoebox-sized, when I received an early production unit to test out, I was instantly surprised by its significant stage presence. At roughly 20 x 13 x 8 inches, the machine looks and feels more like a miniature jet engine than a consumer gadget.

Zero Breeze pitched the unit to me as a 14-pound device, but a quick spin on the scale revealed otherwise: It’s actually 17 pounds, making for a pretty beastly machine no matter how hard you squint. Also: That doesn’t even include the massive external battery, which adds another nine pounds (and $500) to the kit. While the battery clips nicely to the bottom of the main unit, the two pieces have to be physically wired together with a beefy cable that must be attached on both ends with thumbscrews. Later, when you want to charge the battery, it must then be disconnected and attached to a gargantuan A/C adapter that can feed 575 watts of power to it; you can’t charge the battery while it’s powering the Zero Breeze. It’s also worth noting that if you’re near a power outlet, the unit can be operated without the battery, but this requires yet another A/C adapter different from the one that charges the battery. In other words, you’re getting into a lot of gear here.

None of this is complex, it’s just an awful lot to deal with, the sheer bulk of the machine being a particular problem for all but the glampiest of outdoor experiences.

The good news is that the Zero Breeze actually works as advertised. Fire it up with the easy-to-understand buttons that control the handful of settings (mainly the fan power) and the unit begins spitting out cold air. The output temperature typically stays in the 50s, per the digital readout, from the front of the device. Warm air is sucked in through one vent on the rear and hot exhaust goes out through another. You can also attach the included, extendable exhaust hoses to keep the ZB2 from simply recycling the same hot air if you’re in a confined space.

Zero Breeze’s promo video shows people happily basking in cool air while outside: on the tennis court, in the driveway, and on a boat. However, it’s best to temper expectations if you’re attempting to use Zero Breeze in an open-air environment. In this case, you won’t really notice more than a light breeze if you’re more than a few inches away from the vent.

The situation is much better when you’re in a smaller, sealed space (like a tent) with the exhaust directed outside. Here the ZB2 provides quicker and more sustained results, with the more generalized temperature control you get from a home window unit. In a small tent, the output air temperature can quickly drop into the 40s, to the point where it actually gets legitimately cold, though naturally, your results will depend highly on the ambient temperature.

The other thing you’ll immediately notice: Despite claims to the contrary, the Zero Breeze is loud—much louder than a window AC unit and not much quieter than, say, a small blender. In an enclosed tent, the unit can be deafening.

That beefy battery is no joke, though. On a full charge and blasting nonstop AC at maximum power, I managed to get a runtime of about three and a half hours out of the system. (Things started to sputter after that point, as the available power dropped off significantly.) Naturally, you can stretch that quite a bit if you run on lower power or in the new sleep mode, a long-running setting which is also incrementally quieter.

In addition to sleep mode, the Mark II unit has numerous upgrades over its predecessor, which includes more power overall and a dehumidifier mode. The battery pack now lets you charge other devices from it, via a 12-volt DC port or three USB ports of various types. There’s also a light built into the front of the device, and a remote control should you need to place the unit out of reach.

It’s all great stuff that The Sharper Image would have killed for, but lest you forget, the Zero Breeze is expensive, large, and loud. Ultimately, I’m not sure which would be more difficult: to sleep outdoors in the sweaty heat of a Texas summer … or to attempt to put the droning of the Zero Breeze out of your mind enough to get some shut-eye. Well, I guess there’s always earplugs.