Don’t hold your breath for the moon 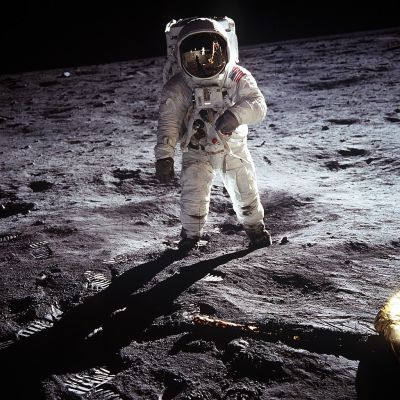 In the house in which I grew up, a single framed newspaper front page loomed over us. “MAN ON MOON“, it declared jubilantly, in an enormous, suitably momentous typeface. Subheadings included “‘It’s very pretty up here … a fine, soft surface’” and, of course, “A giant leap for mankind.”

One leap forward, three steps back. That newspaper was dated fifty years ago today, as I type this. Apollo 17 — “the most recent time humans have travelled beyond low Earth orbit” — took place in December 1972, a date at which a large majority of humanity today was not yet born.

Space travel is not the stuff of science fiction. It is the stuff of history books, of yesteryear, of scratchy black-and-white TV, of that newspaper which was already faded in my youth.

What happened? I mean, lots, but ultimately the costs were too high, the tangible benefits too nonexistent, and the Space Shuttle was too much of an unmitigated disaster from start to finish in every way.

What happens next? Well, there we have a quick answer: we’re going back! America is going to land the first woman on the moon by 2024! Absolutely!

There are numerous “lunar exploration architectures,” or ways to return to the Moon. My friend Casey Handmer, a physicist, space enthusiast, and former levitation engineer, itemizes them in this excellent blog post from a few months ago. One of them is NASA’s proposed Lunar Gateway, which will place a space station into high Moon orbit, from and to which lunar landings will descend and return.

Is this a good idea? …Well, it’s an idea. But it’s better to have a plan and to be making progress on it than not, right? Right? …Except the last few months have seen a bewildering flurry of chaos and confusion which makes NASA’s lunar program more closely resemble a headless chicken than a smoothly oiled machine.

First, an unsigned five-page document, riddled with spectacular grammar and spelling errors such as

(!) was shared by “the Gateway program office at Johnson Space Center in Houston,” reported Ars Technica. (Casey wrote an exegesis of this dubious document, if you want to see it deconstructed in detail.) Then, earlier this month, NASA demoted and replaced its executives in charge of human space exploration.

Does this sound like the behavior of a lunar project accelerating to an on-target, on-time landing? Or more like a bureaucratic catastrophe thrashing frantically while failing to get anywhere at all? “As it stands, few experts believe NASA’s plan for returning to the moon in 2024 is feasible,” says Vox mordantly. You don’t say.

I’d be so delighted to see a woman walk on the moon in 2024. But I’m not exactly holding my breath. By 2032 we will have gone sixty years, three generations, between human lunar excursions. Some people think we shouldn’t go back at all, that there is too much of more importance to do here on Earth. I disagree, strongly, but I think even they might still agree that it would be sad beyond belief if, if and when we next land on the Moon, there’s no one around who remembers the last time.