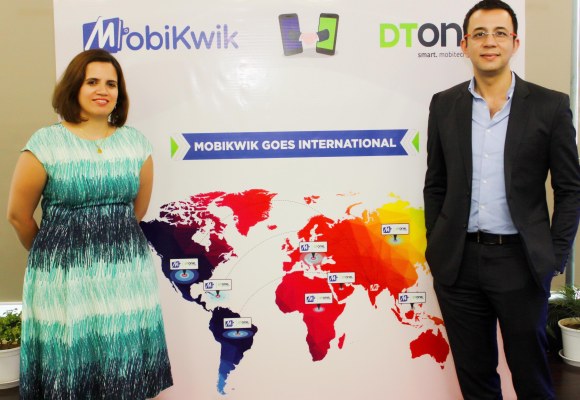 MobiKwik, a mobile wallet app in India that has expanded to add several financial services in recent years, said today it plans to enter international markets as it approaches profitability with the local operation. The company is kick-starting its overseas ambitions with cross-border mobile top-ups support.

The 10-year-old firm said it has partnered with DT One, a Singapore-headquartered payments network, to enable international mobile recharge (topping up credit to a mobile account), rewards, and airtime credit services in over 150 nations across some 550 mobile operators. The feature is now live on the app.

The feature is aimed at Indians living overseas and immigrants in India, Upasana Taku, co-founder of MobiKwik told TechCrunch in an interview. Millions of Indians go overseas to pursue education or look for a job. Currently, there is no convenient way for them to either help — or receive help from — their families and friends in India when they need to top up their phones.

Similarly, millions of people come to India in search for a job. The new functionality from MobiKwik will allow their families and friends to top up their mobile credit as well. Taku said there is no processing fee for customers as MobiKwik is absorbing all the overhead expenses.

For MobiKwik, mobile recharge is just the entry point to assess interest from users, Taku added. “This is the first service we are launching. We will eventually add other essential services as well. Mobile recharge will offer us good data points and will help us understand different markets,” she added.

The announcement comes at a time when MobiKwik is inching closer to profitability, a feat unheard of for a mobile wallet app provider in India. The firm, which claims to have grown its revenue by 100% in the last two years, expects to be profitable by this year and go public by 2022. (Interestingly, MobiKwik was looking to raise a big round at $1 billion valuation two years ago — which never happened.)

In the last one year, the firm has expanded to offer financial services such as loans, insurances, and investment advice. MobiKwik competes with a handful of payment services in India including Paytm, PhonePe, and Google Pay that either support, or fully work on top of a government-backed payment infrastructure called UPI. In April, UPI apps were used to carry out 782 million transactions, according to official figures.

The big numbers have attracted major investors, too. With $285.6 million in funding, India emerged as Asia’s top fintech market in the quarter that ended in March this year.